An often overlooked beneficiary of the bourbon boom has been the resurgence of rye. Initially made in the northeastern states of the U.S., there was once a time when rye enjoyed similar popularity to bourbon among American drinkers. That all changed after Prohibition, and rye’s market share slowly slipped for decades before becoming all but forgotten.

That trend has abruptly changed in recent years, thanks in equal parts to the re-embracing of American whiskeys (lead by bourbon) and the cocktail renaissance. When bartenders rediscovered classic drinks such as the Sazerac and Vieux Carré, rye’s return was sealed.

Two notable styles define the ever-increasing selection of rye whiskeys on liquor store shelves. To be labeled and sold as rye, the whiskey must contain at least 51 percent rye in its mash bill, and it must age for at least two years in charred new oak containers. Many distillers, namely those based in Kentucky, opt to stay close to the minimum required proportion of rye. This type of rye can be thought of as bourbon’s slightly spicier cousin.

Things get spicier still when distillers adhere to a more traditional recipe and use an overwhelming majority of rye in the mash bill (often upwards of 90 percent). Many of the bottles that showcase this profile contain whiskey that’s contract-distilled by the MGP of Indiana distillery. Stumble across the words “Distilled in Indiana” on a bottle’s label, and chances are it’s MGP juice. But that’s not to say all sourced rye whiskeys taste the same, as highlighted by the wide variation in tasting notes for many of the bottles on this list.

After tasting dozens of bottles, VinePair compiled this list of the best rye whiskeys for every budget. We limited inclusion to one expression per brand and listed average prices found online. This is one of many examples of how sourced MGP juice can still offer unique qualities. George Dickel finishes its rye using a chilled charcoal-filtration technique, just like the brand’s Tennessee whisky. The process helps herbal notes shine on the nose, while baking spices and oak lead the palate on this weekday sipper. Average price: $26. Old Forester’s extensive bourbon lineup enjoys a reputation among whiskey aficionados as one that offers incredible value for money in bottles that are always easy to find. The brand’s rye sticks true to that theme. The 65 percent rye content is greater than many other Kentucky offerings, lending a distinct spicy character throughout. Cracked black pepper notes add further intrigue to the nose, and the palate serves up banana bread and nuts. Average price: $26. 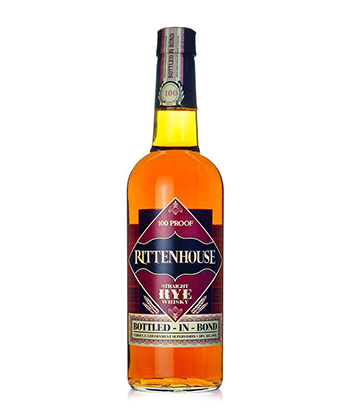 The name of this one-time Pennsylvania brand pays homage to Philadelphia’s Rittenhouse Square. Now owned and produced by Heaven Hill, this 100-proof rye is a bartender favorite, owing to its lively palate and depth of flavor, both of which make it perfect for cocktails. It’s also great enjoyed neat alongside a cold bottle of macro lager. Average price: $27. Produced at the Buffalo Trace distillery in Frankfort, Ky., this rye is believed to contain a 51 percent rye mash bill. Its profile lends itself to bourbon drinkers, with subtle stone fruit and sweet vanilla aromas. The palate is well balanced with a generous helping of spice, making it an ideal pick for mixing its namesake cocktail. Average price: $33. Bottled at 100 proof (just like Knob Creek’s flagship bourbon), this bottle is also believed to include little more than the minimum 51 percent rye in its mash bill. That’s not to say the cereal’s spicy character is not evident throughout, though. The palate is refreshingly bright, with herbal notes and a honeyed, vanilla finish. Average price: $33. Introduced by Heaven Hill in late 2019, this rye is made with a 51 percent rye, 35 percent corn and 14 percent malted barley mash bill. The relatively high proportion of corn adds punchy fruit character, while notes of mint and dill are notable on both nose and palate. A surge of butterscotch at the end provides a decadent finish. Average price: $34. From Utah’s High West Distillery, this bottle contains a blend of proprietary and sourced (MGP) whiskeys, aged between two to seven years, and comprising an overall high rye content. The aromas include a medley of baking spices, maple wood, dried herbs, and black pepper. The body is lithe, with concentrated flavors and a spicy finish. You can sip this, but hold off on adding water or ice. Mix in simple, spirit-forward cocktails. Average price: $36. A 53 percent rye from Brown-Forman’s Woodford Reserve distillery, this gently spiced whiskey has pleasant aromas and a lengthy finish. There’s a distinctive toffee apple aroma, and further richness follows on the palate with sponge cake and banana notes. This bottle shows all the depth of flavor and careful balance that Woodford Reserve fans will be familiar with from the brand’s Kentucky Straight Bourbon. Average price: $37.

This Virginia-made craft rye whiskey is full of character. The identity is unmistakably rye, but the one-year finishing period in French oak wine barrels is pleasant and easy to discern. The whiskey’s rich texture coats the palate, leaving a gentle memento of rye spice on the finish. This is a shining example of the traditional high-rye style from a lesser-known producer that should be on your radar. Average price: $44. Every year, Michter’s limited production and limited release bottlings have whiskey hunters scrambling to snag a bottle in the wild, often with fruitless results. The Kentucky brand’s US*1 Single Barrel rye is much easier to come by and infinitely more affordable. Produced with an undisclosed mash bill, this rye serves seamless integration of peppery cereal notes and sweet toasted barrel. Average price: $45. The sweet caramel and banana aromas of this rye belie its 95 percent rye mash bill. The expected spice instead arrives on its lively palate, where it mingles with sweet honey, coconut, and more caramel notes. At this price point, you can demand that your whiskey holds up when sipped neat, and this bottle passes that test. A few drops of water coax out attractive fruity notes. Average price: $50. A one-time Maryland rye, Pikesville is now produced by Heaven Hill and arrives at 110 proof following six years of aging. The alcohol and age combine to provide a layered nose and intense palate. The mash bill adds further character, with notes of dill, spice, rich banana, and stone fruit. This is a nuanced but powerful rye whiskey. Average price: $52. Bottled at a barrel strength 110.8 proof, this single-barrel Kentucky rye is notable for its 100 percent rye mash bill, which contains 95 percent rye and 5 percent malted rye. It tastes like a rye whiskey crafted for red wine drinkers, with vibrant fruity notes backed up by toasted oak and tingling spice. This bottle is brimming with character and offers excellent value for money. Average price: $58. With MGP producing ryes for so many major names in American whiskey, it was only a matter of time before the Indiana distillery launched a proprietary product line. That moment came in 2018, with the introduction of Rossville Union. Containing a blend of MGP’s 51 percent and 95 percent rye mash bills, this rye is herbaceous and spicy with a hint of smoke. The Barrel Proof retails for around $20 more than the entry-level Straight Rye, but it’s an upgrade in complexity that warrants the additional Andrew Jackson. Average price: $60. Wild Turkey’s Russell’s Reserve line honors father and son duo Jimmy and Eddie Russell. Combined, the duo share more than 100 years of experience working at the distillery. Arriving at 104 proof, this bottle packs more punch than the brand’s 6-year-old iteration, which is bottled at 90 proof. With a low-rye and high-corn mash bill, this single-barrel whiskey strikes a nice balance between sweet and spicy, with an overall fruit-forward profile. Average price: $63. Ten years old and bottled at 100 proof, this is a robust, distinctive rye whiskey. Baked apples and butterscotch lead the nose, with fresh stone fruit and rye arriving on the back end. The palate has all the depth and richness you’re expecting, but finishes drier and spicier than the nose suggests. The 10-year-old retails for less than a quarter of WhistlePig’s revered Boss Hog release and offers many of the same qualities at a fraction of the price. Average price: $83. The 116 proof indicated on this bottle’s label prompts a double-take when sipping the whiskey. The alcohol burn is barely noticeable but the high ABV content does intensify the rye-forward profile and provides a never-ending finish. Subtle oak influence complements dried fruit and toffee notes. Average price: $90. Those looking to splurge should not be perturbed by this rye’s two year age statement. There’s no shortage of character and no hint of immaturity in this whiskey. Dried cherry, baking spice, and mint aromas dazzle on the nose. The palate is grippy and full of energy, starting with sweet fruit and finishing with spice and oak. Forget age statements, this is a unique offering for the contrarians among us. Average price: $109. While it’s true that Buffalo Trace’s E.H. Taylor lineup is increasingly hard to come by, the bottled in bond rye delivers on the hype. Thought to be made using the distillery’s high-rye rye mash bill, and believed to be aged around nine to 10 years old, this whiskey serves a democratic balance of youthful character and patient aging. The nose is floral and herbaceous (think: dill, mint, and lavender), with a whiff of smoke and a subtle hint of oak. Rye drives the palate, with the occasional intermission of sweet peaches and vanilla custard. It’s a pricey option and one to be savored over time on special occasions. Average price: $146.