The U.S. launch of Danish vodka brand Denaka says much about the state of vodka in America in 1988. Imported brands like Stolichnaya, Absolut, and Finlandia were searing hot at the time, while the domestic Smirnoff brand had been the best-selling spirit in the country for at least a decade.

To stand out in the field, Denaka’s importer ran a $40 million advertising campaign simply promoting it as “the world’s most expensive vodka.” It was a bold move, not least because this was an unheard-of brand in a congested, competitive category. But also because Denaka was a vodka — a flavorless, odorless spirit whose quality is determined by its lack of imperfections, otherwise known as “smoothness.”

That a brand would draw attention to, let alone celebrate, being the most expensive supplier of one such neutral spirit speaks to the bullet-proof, Teflon nature of vodka at the time. That such a campaign now seems so remarkably misguided signals how far things have shifted in the intervening 30 years.

For, although it has continuously led spirits sales (by volume) in the U.S. since the mid-1970s, vodka has lost its luster. Its position in popular and cocktail culture has drifted, and its cachet has all but disappeared.

Where vodka once played a starring on-screen role in the Cosmopolitans of “Sex and the City,” the Old Fashioneds of “Mad Men” and “Crazy, Stupid, Love” now come quicker to mind when talking cocktails on camera.

The celebrity endorsements, too, have all but dried up. When Sean “Diddy” Combs teamed up with Cîroc in the glory days of 2007, the Diageo-owned brand was shifting around 50,000 cases a year. Within a decade, sales had grown to more than 2 million cases annually.

Nowadays, celebrities and alcohol conglomerates instead cast their gazes elsewhere. The tequila business is a common first port of call, with many attempting to capture the same lightning as George Clooney’s Casamigos. For those who feel the agave space is too crowded, there’s always gin, with the recent sale of Ryan Reynolds’ Aviation Gin brand showing it, too, can be just as lucrative.

To borrow the phrasing from one of vodka’s most famous on-screen proponents, you can’t help but wonder: How did the world’s most lucrative spirit lose its star appeal, and when did vodka stop being cool? The Rise of Vodka in the U.S.

Vodka’s history in the U.S. is surprisingly short, officially beginning in 1934 when Smirnoff was launched in Connecticut. The Alcohol and Tobacco Tax and Trade Bureau, which rules on such things as the labeling and taxation of alcohol, didn’t come up with its own definition for identifying vodka until 1949, by which point the spirit was already quickly gaining popularity.

The first — Prohibition — is also regularly cited as being a huge drawback for America’s drinking culture. In this sense, it seems only natural that the great, failed experiment would also have a hand in raising the stock of an odorless, flavorless spirit.

“People couldn’t drink for so many years, so they want to get drunk. What is the fastest, easiest way to get there?” Matus says. “Vodka. Plus, you can mix it with anything.”

Vodka’s versatility (read: neutral profile) is no doubt a quality that has led it to become most folks’ first foray onto the path of hard liquor. But over time, specific combinations have proved more successful than others.

First came the Screwdriver and Bloody Mary, followed by the Moscow Mule in the early 1940s. Things then began to really ramp up in the 1960s, when vodka overtook gin as the most popular clear spirit in America.

This may or may not have had something to do with British special agent 007, James Bond, but the metaphorical usurping of this particular throne is captured in the most famous big-screen cocktail order of all time, with Sean Connery’s James Bond receiving a vodka Martini, shaken, not stirred, in the 1962 classic “Dr. No.”

Cocktail historian and writer David Wondrich says the forces that brought vodka to the forefront transcended drinks trends. These were cultural shifts with deep, post-World War II roots. “The postwar world moved toward this idea that everything had to be modern, sleek, and space-age,” he says. “What could possibly fit the bill better than vodka? It’s clear and tastes a bit like jet fuel — works in much the same way, too.”

It surely helped that vodka didn’t resemble what that generation’s parents drank — nor did it really resemble anything in terms of taste, which happened to be a good thing at the time. By the 1960s, flavor was becoming increasingly less important, and everything from light beer to blended whiskey seemed to be trying to imitate vodka. None could beat it at its own game. 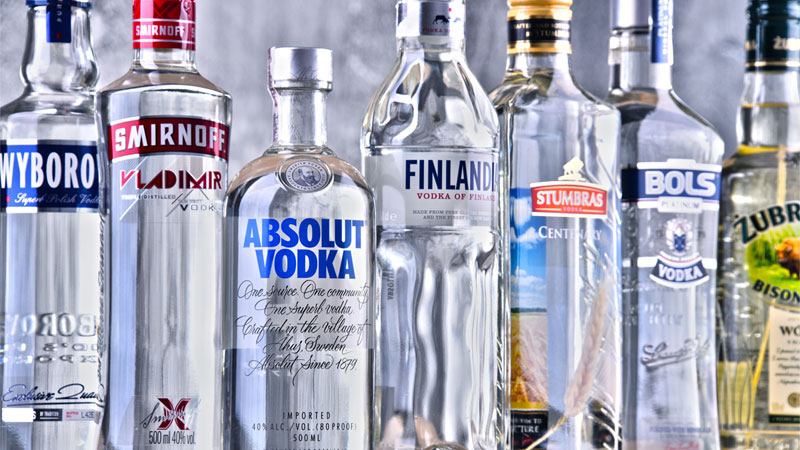 No trends are permanent, though, and even if vodka did enjoy 40-odd years in the sun, its reputation would eventually sour. Wondrich notes that there was no one spirit that robbed vodka of its place in popular and cocktail culture, but instead, an attitude of exploration and open-mindedness.

In the mid-2000s, there began a culinary and cocktail revolution in America. People no longer cared for clean and modern, they wanted flavor and authenticity — products with substance, heritage, and history. With a reputation built on forward-thinking modernity, vodka checked none of these boxes.

Meanwhile, the very individuals shaping the cocktail renaissance had their sights firmly fixed on the past. The likes of Dale Degroff, Julie Reiner, and Audrey Saunders found guidance in influential pre-Prohibition cocktail tomes, such as Jerry Thomas’s “The Bar-Tenders Guide, or How To Mix Drinks” and Harry Craddock’s “The Savoy Cocktail Book.”

Given that vodka didn’t appear commercially in the U.S. until after repeal, the original editions of these books paid little attention to the spirit, focusing more on base liquors like gin, whiskey, and rum. Even books authored in later years, such as David Embury’s “The Fine Art of Mixing Drinks,” first published in 1948, were none too kind to vodka.

And so the stage was set for vodka’s cultural demise.

“For people to coalesce around an idea, sometimes you do have to have your enemies,” says Derek Brown, owner of Washington D.C.’s Columbia Room and author of “Spirits, Sugar, Water, Bitters: How the Cocktail Conquered the World.”

“Vodka became that fitting enemy to the craft cocktail movement, to the point where bartenders thumbed their nose at it,” he adds. “We would refuse to make drinks with it; we thought people were simple because they ordered it; and we thought we could do better.”

Greg Boehm, who owns the barware company Cocktail Kingdom as well as a handful of notable cocktail bars in Manhattan, recalls similar sentiments from the time. “There was a war on vodka and a lot of the people that were at the forefront of the cocktail renaissance were definitely — to a fault — anti-vodka,” he says.

Looking back, Brown acknowledges that such actions were probably over the top — “We were being a bunch of dicks,” he says — but on the other hand, vodka had gotten away with too much for too long. Between the ubiquitous notion of “smooth” and the incredible sums brands were charging for their unremarkable ultra-premium offerings, there was guilt on both sides.

By all accounts, the aim of this fight was not to kill vodka sales, nor was it an effort to erase it from back bars entirely. Instead, the leaders of the revolution wished only to help drinkers expand their horizons, and carve out more space on menus for amari and vermouth, and everything in between.

Within a few years, this would start to play out. As the owner of the influential San Francisco bar, Elixir, and the then-brand ambassador for the vodka brand Square One Organic Spirits, H. Joseph Ehrmann sheds light on what it was like for both those buying and selling spirits at the time.

During the mid-2000s, Ehrmann says, his main challenge as a brand ambassador was selling Square One amid “a sea of vodka.” The market was huge, he says, but with so many brands to compete with, it was hard to make any noise.

Fast-forward a few years and the challenge came from the fact that bartenders, especially those who fell into the “craft” movement, were much more interested in the latest liqueurs and vermouths, and rediscovered hard-to-come-by bottlings. “That market went on for a good five to 10 years until finally everybody’s back bar was full,” Ehrmann says. “During all that time, no one had room for vodka.”

Past craft cocktails, there are other factors to consider when tracking the demise of vodka in popular culture. Perhaps fueled by drinkers’ newfound desire to experiment, vodka brands answered with their very own revolution during the 2000s. It would ultimately do more harm to vodka’s reputation than good.

“There was a flavor explosion,” says Danny Brager, a beverage alcohol consultant and former senior vice president at Nielsen. “And it really was an explosion.” While the influx of new flavors initially acted as a “tailwind” for the overall vodka category, their influence soon slowed, Brager explains.

At some point, one has to question whether the choice between chipotle, hibiscus, and wasabi — all vodka flavors recorded by Brager in a running list he was keeping in 2013 — was a good or bad thing for the vodka category. In a landscape where drinkers started taking alcohol more seriously and placing importance on factors such as authenticity, most signs almost certainly point to this trend having a negative impact.

This happened to be the moment when whiskey overtook vodka as the most valuable spirit in the U.S. Since 2013, the value of the “Super Premium” price category of vodkas has shrunk almost $200 million, while the “Value” and “Premium” categories have remained steady, according to the Distilled Spirits Council. This bucks the current trend of premiumization that we’re seeing across the board in spirits, with almost every style of liquor other than vodka growing fastest in the highest price tier.

And it makes sense that drinkers would be willing to spend more on styles like bourbon and Scotch than plain old vodka. From storied producers to special aging techniques, there’s more to entice engaged drinkers. “You don’t have customers at your bar trying to show off how much they know about vodka,” Boehm says. “Which used to happen all the time, by the way.”

Nearly two decades since the beginning of the craft cocktail renaissance, all seem to agree that the war on vodka is now over. But to whom the spoils of this particular battle went is less certain. “If our goal was to transform people into loving amaro and whiskey and gin, we lost,” Brown says. “Vodka is still No. 1.”

Yet, Brown also notes that bartenders no longer fight against vodka cocktails nor look down on those ordering them. If anything, you’re more likely to see bartenders celebrating vodka, with T-shirts declaring “Vodka Pays Bills” among the more popular apparel on sale via Boehm’s Cocktail Kingdom.

“The times have changed,” Wondrich says. “Vodka’s not a danger anymore.”