Whether it's over brunch or before hopping on an airplane, the Bloody Mary is a firmly entrenched cultural icon.

Looking to get creative? See our favorite Bloody Mary riffs below.

Why is the drink called a Bloody Mary?

There are two stories in circulation regarding the origins of the Bloody Mary’s name. The first story suggests that the cocktail is named the Bloody Mary after Queen Mary Tudor of England, best known for her cruel and incredibly violent actions against Protestants in the 1500s. The vodka in the cocktail is meant to symbolize the Queen’s fiery and wicked temper, while the red color of the tomato juice represents the bloodshed.

The alternative story is much less gruesome in nature and suggests that the Bloody Mary was named after Mary Geraghty, a long-time friend of entertainer George Jessel.

Is a Bloody Mary healthy?

Aside from the fact that vodka is not healthy in and of itself, a Bloody Mary is actually a relatively healthy cocktail. The drink’s ingredients are packed full of electrolytes, potassium, sodium, and Vitamin C. Furthermore, tomatoes contain a compound called lycopene, which is high in antioxidants, helping to combat any toxins in the liver.

Due to the amount of tomato juice present, a Bloody Mary is going to taste first and foremost like a tomato. With the addition of heat sources and/or Worcestershire sauce, the overall flavor of a Bloody Mary is savory and spicy.

"The Bloody Mary is the most inconsistently made cocktail,” Alejandro Javier Lopez, founder and president of Toma Craft Cocktail Mixers, says. While classics like the Old Fashioned have prescribed processes, Bloody Marys are a moving target.

Order one at a bar or restaurant, and it might be served with a celery stick, pickled shrimp, or skewered slider. “Some bartenders and civilians apply lip-numbing spice mixes to the rim of the glass,” Rosie Schaap writes in The New York Times.

The cocktail within could be fiery or flavorless. Cautious bartenders might deliberately under-season for fear of alienating guests with lower spice thresholds.

How to Make a Bloody Mary

The general Bloody Mary rubric is base spirit plus tomato juice, followed by salt for flavor, citrus and/or horseradish for bite, spice for heat, and umami by way of Worcestershire sauce (or, say, bacon strip). You can make one perfectly suited to your tastes by understanding how all the different components complement one another, and layering each with care. Restraint is the name of the game here.

Salt is arguably your most important component. It tempers the sweetness of tomato juice and complements all other flavors. Instead of salting the cocktail’s rim, though, embrace flavorful, salty ingredients in the glass.

Possibilities include Worcestershire sauce, soy sauce, beef bouillon, or fish sauce, all of which also “lend some beautiful umami to your mix,” Jonathan Shock, bar manager of Detroit’s Lady of the House, says. (Of course, those last two are not applicable for vegetarian drinkers.)

“Make sure you add a little brine,” Ashtin Berry, matriarch, The Cook’s Club, New Orleans, says. Pickle brine has a vegetal salinity that plays well off citrus and horseradish, two components that bring brightness and buoyancy to an otherwise heavy drink. If you taste your Bloody Mary and are reminded of Campbell’s soup, try adding a squeeze of lemon or tiny pinch of grated horseradish.

Spice can also brighten your Bloody, though remember that it’s much easier to add than take away.

“Paprika, cayenne, and/or a good hot sauce are a great way to bring the appropriate kick you want,” Shock says. “But if making for a group, just remember that not everyone may have the same spice tolerance as you do.”

Jarred or prepared horseradish contains additives like vinegar, salt, oil, and preservatives, which will throw off the taste of your finished drink. Fresh horseradish, on the other hand, can be added in small doses with varying intensity. It brings bright, zesty notes to offset the sweet viscosity of tomato juice. Use it sparingly, though — horseradish will continue to intensify in flavor after it sits in the mix, Shock says.

Is it a tiny bit annoying to get out your box grater when you’re just trying to fix a drink? Sure. But the effort is on par with trimming celery, and the end absolutely justifies the means.

“Real talk, do not just sit everything in a glass and expect it to taste good,” Berry says. Build your drink in a mixing glass, and sample it every step of the way to balance all its bold flavors.

You can do this with a short straw, like many bartenders do — simply quarter your favorite disposable straw, take a tiny sip, and save the other segments for future cocktail experiments.

There’s no shame in using a bottled mix, according to Shock. “If you have a favorite mix that you like, that will be the easiest way to replicate your best Bloody on a consistent basis,” he says.

The challenge is finding one you like. When VinePair blind-tasted several packaged varieties, our favorites were not necessarily the ones with the coolest branding. Avoid buyer's remorse by looking at ingredients. If a prepackaged mix lists dill, and you’ve always hated dill-flecked potato salad, choose another bottle. And if you taste a Bloody you like at a bar or restaurant, politely ask your bartender if they used a mix. Many reputable establishments do. 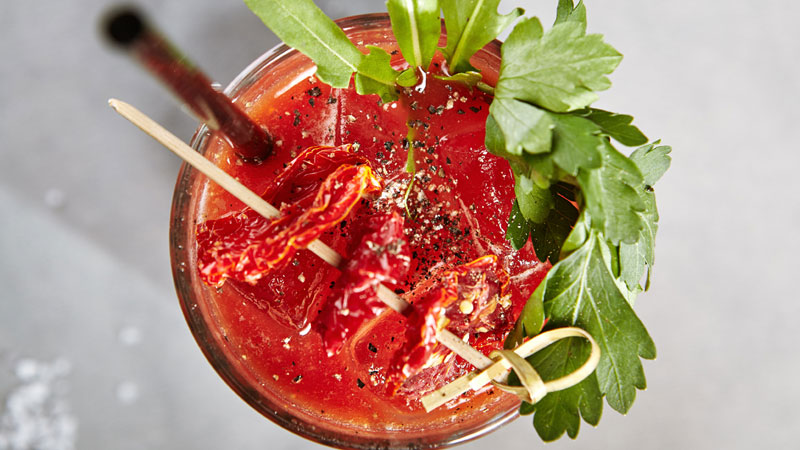 What to Avoid When Making Bloody Marys

1. You Are Not Limited to Vodka.

“Don’t be afraid to play around with your base spirits,” Shock says. “You might stumble into something amazing.” While the classic Bloody Mary recipe calls for vodka, this, like almost every other component, is modifiable.

Gin is Shock’s “go to” for Bloody Marys, but he likes tequila and aquavit as well. Berry prefers Bloody Marias, or those made with tequila, for their complexity.

Take it easy on over-the-top Bloody Mary garnishes. Miniature cheeseburgers or fried oysters and the like may be eye-catching, but they do nothing to complement the drink itself — in most cases, they simply detract from what’s in the glass.

Pickles or olives work, and “a celery stick is always a perfect pairing,” Shock says. Be confident enough to keep it simple. Sunday mornings are tough enough.