The Gimlet is a gin-based cocktail that's been around since the Jazz Age, if not earlier. The recipe is quite simple, but there are multiple schools of thought on how to prepare it. Gin is always the base, but from there disputes arise. If you're using fresh lime juice, some simple syrup is in order. If you're using Rose's (which some insist you must), no added sugar is needed. Some traditional recipes call for a splash of soda, and other's don't. It really comes down to personal preference. And if you don't like gin? Swap in vodka and you're good to go.

Why is it called a Gimlet?

The Gimlet was popularized by British sailors in the 1800s. At the time citrus was incredibly beneficial for sailors as it prevented scurvy brought on by a vitamin C deficiency, and as the Gimlet contains lime juice, it was a favorite amongst those spending vast amounts of time on the water. The name Gimlet allegedly comes from Rear-Admiral Sir Thomas Desmond Gimlette who, when acting as a doctor to sailors aboard, prescribed gin with lime juice to sailors as a method of preventing or treating scurvy on his ships.

What is the difference between a Tom Collins and a Gimlet?

A Gimlet and a Tom Collins are similar in composition, with only a few ingredients differentiating between the two. While both cocktails are gin-based, the Gimlet uses lime juice for a citrus addition, while the Tom Collins requires lemon juice. Furthermore, the Tom Collins is sweetened with a touch of simple syrup and topped off with soda water.

As a rule of thumb, if your cocktail is slightly carbonated and lemony sweet, it’s a Tom Collins. If it’s still and tart, it’s a Gimlet.

Is a Gimlet shaken or stirred?

As directed by Harry Craddock in his book “The Savoy Cocktail Book,” the Gimlet should be shaken for optimal flavor, as well as to eliminate any cloudiness from the lime juice.

Freshly squeezed citrus juice is often cited as one of the most important ingredients in America’s cocktail renaissance. But in one peculiar instance, the search for fresh has seen a classic cocktail lose its historic identity.

Order a Gimlet from a well-versed barkeep, and you will likely receive a mix of gin, lime juice, and simple syrup. Ostensibly, this is a gin Daiquiri, or a hybrid between a Gin Fix and a Gin Rickey if you wish to be esoteric. This drink offers delicious refreshment in its own right, but it’s not a classic Gimlet.

The demise of the traditional Gimlet is closely linked to the evolution — or devolution — of a key ingredient: lime cordial. “That ingredient doesn't exist today, except in the form of Rose’s, which is this kind of bastardized horrible version of it,” says Toby Cecchini, co-owner of New York City’s The Long Island Bar and The Rockwell Place. “It probably was a decent product at one point, but now it's garbage.”

First commercially produced by a Scotsman named Lauchlin Rose in 1867, Rose’s lime cordial offered a timely solution for the British Royal Navy. Lime juice had to be rationed to sailors by law to fight scurvy. But carrying the fruit on board took up valuable space, and juicing limes prior to a long voyage would see the citrus spoil too soon. Rose devised a solution, curing the fresh juice (and possibly peels) of the fruit with sugar, in turn yielding a preserved liquid that could be filled into barrels. Combined with gin, another Royal Navy staple, a new cocktail was born: the Gimlet.

The first known printed recipe for the Gimlet appeared in "Harry’s ABC of Mixing Cocktails," published by Harry MacElhone in 1922. MacElhone’s recipe calls for equal parts gin and Rose’s Lime Juice Cordial, stirred and served with ice, if so desired. MacElhone accompanies the recipe with a brief comment: “A very popular beverage in the Navy.”

Nowadays, we can only imagine what Rose’s concoction tasted like. A tart, luscious oleo saccharum, cut with bracing lime juice, perhaps. It surely bore little resemblance to the product that carries his name today. The fluorescent hue of Rose’s Sweetened Lime Juice is as easy to spot on supermarket shelves as its high-fructose corn syrup is detectable on the palate. Modern bartenders can be forgiven if not praised for omitting it from their builds. But for some purists, like Cecchini, replacing those ingredients with fresh lime and simple syrup simply does not yield a bonafide Gimlet.

Rather than use Rose’s, Cecchini spent years tweaking a recipe for his own lime cordial in the early 2010s. When the time came to open The Long Island Bar in 2013, Cecchini knew that his resurrected, historically accurate Gimlet would become a staple. “I just thought ‘this is one of the best things I've ever had in my life,’” he says. Suffice to say, it’s remained on the menu ever since.

Despite its lengthy preparation, other bartenders agree that if there’s no lime cordial involved, it’s not a Gimlet. But in a pinch, some say elevated alternatives are available — and they don’t contain corn syrup. Whether it’s historical accuracy you seek, or an easily upgraded solution, here are five timeless tips for perfecting the Gimlet.

How To Make A Gimlet

Cecchini published an early recipe for his lime cordial in The New York Times in 2011. Though the preparation has evolved over time, it has always been a time-consuming process. The first step marinates fresh lime peels with sugar overnight, creating an oleo saccharum. The next day, freshly squeezed juice of the peeled fruit is stirred into the mixture, which is then left to marinate for a further 24 hours in the refrigerator. Cecchini opts to finish the cordial with ginger, blending cleaned, peeled roots with some of the cordial in a food processor. The puree is reincorporated into the cordial and left to marinate for a final 24 hours in the refrigerator. Only then is the preparation finally ready to be strained through a fine sieve and served.

“It’s really tough work and it’s a constant ongoing process, but it's totally worth it,” Cecchini says. The final spec for Cecchini’s Gimlet includes a shaken mix of 2 ounces of gin, 1 ounce of cordial, and 3/4 ounce fresh lime juice, which cuts through the tart, sweet cordial.

Alex Smith, partner at San Francisco gin bar Whitechapel, shares a similar view to Cecchini. “Gin, lime juice, and sugar is a delicious cocktail, but it’s not a Gimlet,” he says. Smith also prepares his own lime cordial, though his technique varies slightly.

Rather than peel the fruit, he cuts each lime into eight wedges and coats them with sugar. Smith leaves this preparation to marinate for four days in the refrigerator. "Instead of crushing the lime to extract the juice, which produces an opaque juice, we use the sugar coating as a way to draw clear liquid out," explains Smith. “You also get the depth of flavor of lime oils from the skins, without the nasty bitterness from crushed pith,” he says.

Smith’s final, clear solution has a tart profile, so he balances the cordial with simple syrup and powdered tartaric or citric acid. For home bartenders wishing to replicate his recipe, Smith suggests eight limes cut into wedges and coated with sugar; then one cup of simple syrup and half a teaspoon of powdered acid to finish. (Citric acid is easier to work with because it’s more forgiving, he says.) To build the cocktail, Smith shakes 2 ounces of gin with 1 ounce of lime cordial.

Use bitters and/or lime peel for a simpler approach.

Not everyone has the space or time to create a homemade lime cordial. Thankfully, other bartenders offer easy solutions for upgrading the mix of gin, lime juice, and simple syrup. Matthew Belanger, head bartender at Death & Co. LA, suggests adding squeezed lime wedges into the cocktail shaker before mixing. “The action of shaking will beat up the lime peel and release some oils into the drink, which helps to simulate the higher concentration of lime oil found in a cordial,” he explains.

At The Gin Joint in Charleston, S.C., owner James Bolt adds a few dashes of Scrappy’s Lime Bitters into the build before shaking. He also expresses a lime twist over the cocktail before serving, adding aromatic lime oils that linger on the surface of the cocktail. Bolt omits the twist as a garnish, and instead serves with a dehydrated lime wheel or no garnish at all.

With more than 60 gins at his bar, Bolt has tested the Gimlet with multiple styles of gin. But his ultimate preference lies with classic London Dry. “I like juniper-forward, botanical-tasting gins, they hold up better shaken,” he says. Whitechapel’s Smith agrees: “Again, it’s the historically authentic way to go,” he says. 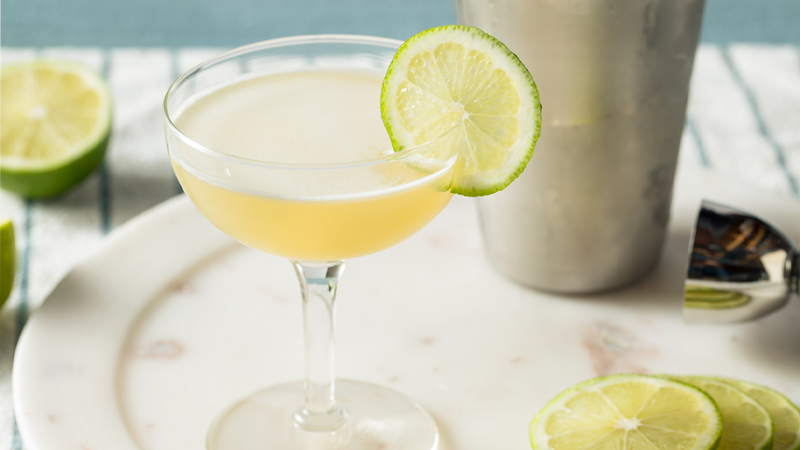 WHAT TO AVOID WHEN MAKING A GIMLET

Don’t be afraid to experiment.

For Jessica Gonzalez, co-beverage director of Wonderbar in Beacon, N.Y., the main consideration when selecting a gin is not the style but instead its quality. “Don't be afraid to splurge a little bit, it makes a huge difference in the cocktail,” she says.

Gonzalez recommends Ford’s for those seeking a classic London Dry style. She also points to New Western-style Bimini as one of her “go-to” picks. Death & Co.’s Belanger also recommends both of these brands, and adds Australia’s Four Pillars as another New Western consideration.

While Cecchini also opts for Ford’s as his preferred gin, he urges against confining the drink to this spirit. “You can make a Gimlet out of literally anything,” he says. Vodka is a popular alternative, but rhum agricole, tequila, mezcal, and even aquavit can all work in the drink, Cecchini says, “as long as you’re using cordial.”

Whether using cordial, fresh juice, or a combination of the two, all bartenders agreed that the Gimlet should be shaken. “Make sure you shake it long enough,” warns Belanger. “Most home bartenders drastically under-shake their cocktails. A good rule of thumb is to shake the thing until your tins are so cold, they're painful to touch!”