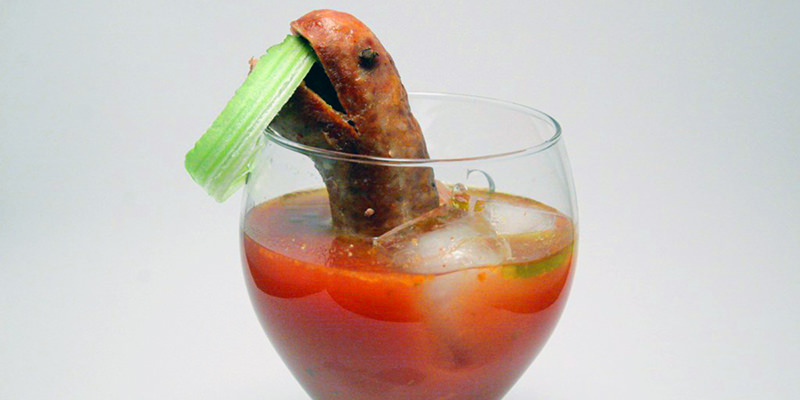 Usually when we receive a cocktail, we hastily remove whatever’s sitting on top. It’s an obstruction to immediate imbibing. And possibly a facial hazard.

Fortunately, the days of haute mixology hit us and lots of bars tossed elaborate garnishes and (sadly) those awesome paper umbrellas in favor of something more elegant, even austere. But there are hardliners still out there, topping their cocktails with everything from anthropomorphized sausage meats to cephalopods to human body parts. Yes, that’s a thing.

Don’t worry, that last garnish is given voluntarily. (Except for the first time.) But you should still read on with terror and trepidation as we span the gamut of some of the most bizarre beverage toppers out there.*

*The world of Bloody Marys alone has its own world of insane garnishes—and we literally mean world, from aggressively pickled vegetable to various meat to the succulent fruits of the ocean. We’ve already covered some of the craziest Bloody Marys, so we’re abstaining (mostly) here.

Cheeseburger from Taste with the Eyes The weird thing about putting a cheeseburger slider on a Bloody Mary? It’s almost ho-hum and commonplace now. But how can we accept that as the garnish status quo? There is an entire, albeit small, sandwich on this drink. Basically a cocktail with a Happy Meal garnish.

Octopus Leg from The Epicurienne Leave it to a Kiwi to take her love of octopus to the next level. Granted, the Octo-Cocktail from this self-professed amateur foodie is specifically “NOT for consumption.” It’s the result of using guava juice and water to tenderize octopus. (What now?) But she built it into a faux Cosmo anyway. If only a creature of the deep had actually emerged from the glass during the Sex and The City sequel. Former The Hills star (and sworn frenemy of Speidi) is now a lifestyle guru, with earthtone bridesmaids’ dresses and “wanderlust hair” how-to’s on her home site. Another precious lifestyle gem involves one of the cuter/weird garnishes we’ve seen, cotton candy, doused with champagne (even better). Appropriate that here it looks like little tufts of petal-pink cloud floating over an overpriced Orange County sunset. Here, the cocktail is the garnish. Or vice versa? Doug Laming of Sydney apparently uses a “Cointreau Caviar Spherification Kit” to create these little pearls bursting with juicy Margarita. This shouldn’t be too insane, since there are garlic fiends out there making ice cream with the stuff. But a raw garlic clove garnish (on top of a savory, mushroom-garlic consommé infused Vesper cocktail) is definitely next level. Avoid on dates; offer to test any potential vampires.

Gummy Sharks from The Sugar Factory Remember those Shark Attack fruit snacks? (And yes, it’s an undisputed fact that the Great White was the best flavor.) Anyway, relive those days with this massive blue cocktail complete with grown-up sharks.

Sausage Ditka from The Pizzle This may well be the greatest cocktail tribute of all time. Concocted in honor of the author witnessing former Bears Coach Mike Ditka in an angry moment of Chicago traffic, made with fresh sausage juice (yes) and giardinera, among other things—including, yes, a whole Italian sausage with a celery Ditka mustache. Viola, Coach Juice.

Uni, aka Sea Urchin Gonads, at The Line Uni, if you’ve never had it, is delicious—a soft orange mass of buttery salinity that both bursts and melts on the tongue. Still, we’re not sure how we’d take one of the uni-topped cocktails at L.A.’s The Line (which can also feature cumin simple syrup and durian bitters—durian being the stinkiest fruit of all time).

A Human Toe at the Sourdough Saloon Yes, this is a thing, and yes, it happens in the Yukon. Of course. Apparently you can become a member of the Sourtoe Cocktail Club by ordering the infamous drink—a shot (you get your choice) “garnished” with a dehydrated human toe. The first toe began with hypothermia, but nowadays toes are donated.

Yeah, we just threw up in our mouths, too.