The Story Behind The Zombie

A quintessential tiki drink — combining three kinds of rum, two juices, apricot brandy, and tropical liqueurs and syrups — the Zombie is just the drink to bring you back to life.

According to tiki enthusiast Arnold Bitner, the Zombie was created in 1934 at Donn Beach’s Don the Beachcomber restaurant in Hollywood, known for being the first tiki bar. Rumor has it that the Zombie was concocted to aid a hung over customer who was on his way to a business meeting. Several days later, the customer returned, claiming the drink had turned him into “a zombie” for his entire trip. Subsequently, Beach’s restaurants would limit customers to only two Zombies per meal.

While Beach also claimed to have invented the classic Mai Tai, as tiki historian and mixologist Jeff Berry says, his invention of the Zombie is a great introduction to the complex and bombastic world of tiki cocktails. How do you make a Zombie at home?

To make a Zombie at home, combine both light and dark rums, apricot brandy, falernum, freshly-squeezed lime juice, pineapple juice, and grenadine in a cocktail shaker. Shake, and strain the contents into a Collins or highball glass filled with ice. Top the cocktail with a float of overproof rum, and garnish with pineapple and cherry.

What types of rum do you need for a Zombie?

Why is it called a Zombie cocktail?

According to legend, the Zombie was named after the concoction was whipped up to aid a very hungover man on his way to a business meeting. When the same man returned to the bar, Donn Beach’s Don the Beachcomber in Hollywood, he claimed that the drink had turned him into a zombie for the remainder of his trip. 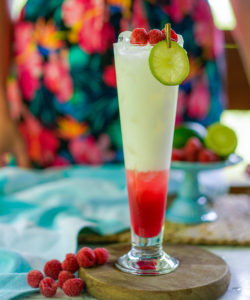 The Coco-Raspberry Colada Recipe:
A cross between a Daiquiri and a Pina Colada, this easy rum cocktail makes good use of fresh raspberries. Learn how to make it with this recipe! Shannon Mustipher’s Barbadian Rum Punch Recipe:
This punch was among the most popular libations in the American colonies, and calls for a mix of bold rum, sugar, citrus, and tea. Autumn in the Tropics Recipe:
This rum and Aperol cocktail gives tropical flavors a Northeastern twist with a fresh squash blossom and Maine blueberries. Spiked Blackberry Lemonade Recipe:
In NYC I came across a shop selling fresh blackberry lemonade that was so delicious, I knew I’d have to recreate it, but with a boozy twist. The Idle Hands Recipe:
A banana daiquiri that looks like water? Wildly inventive Chicago tiki bar Three Dots and a Dash shares the secret to its crystal-clear creation.