Capitalizing on the demand for lighter alcoholic alternatives, both White Claw Hard Seltzer and Truly Hard Seltzer arrived on the scene at exactly the right time. Their meteoric rise to fame, with White Claw today leading in sales, and Truly holding strong in second place, has changed how Americans imbibe.

While their endless lines of boozy seltzers continue to dominate the market, it remains to be seen whether they represent a passing fad or a permanent fixture in the coming decades. Keep reading to learn more about how these two giants, which continue to influence America’s drinking culture, compare.

2016 was a banner year for hard seltzer fans, as it marked the launch of both White Claw and Truly. Initially known for its glass bottles, “Truly Spiked and Sparkling” was developed by the U.S. brewing behemoth Boston Beer Company, owner of the iconic Samuel Adams. Three years later, the brand changed its name to include “Hard Seltzer.”

White Claw was released in the U.S. a few months later by Mark Anthony Brands (no relation to the singer), and also happens to be the producer of the decades-old Mike’s Hard Lemonade — the OG of flavored malt beverages (FMB). 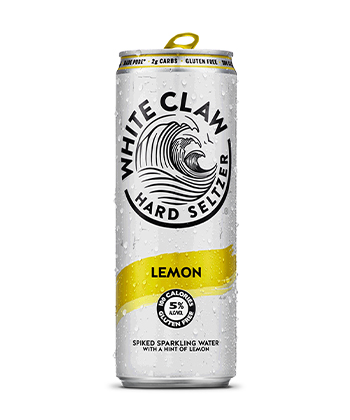 As a White Claw brand representative explained to VinePair, its 5 percent ABV “comes from fermented sugars derived from malted gluten-free grains.” While White Claw falls into the FMB category, it is not beer. Truly is also brewed similarly to beer, with its alcohol content (also at 5 percent ABV) derived from fermented cane sugar. And both brands count natural flavors, cane sugar, and juice concentrate as ingredients.

When it comes to nutritional values, the brands are fairly neck and neck. Each contains just 100 calories in a 12-ounce serving. Truly has a slight edge in terms of sugar content, with just 1 gram versus White Claw’s 2 grams, although White Claw’s iced tea line only has 1 gram. The brands’ lineups each contain hard iced teas and slightly boozier products, “White Claw Surge” and “Truly Extra Hard Seltzer” that clock in at 8 percent ABV.

VinePair’s tasting of White Claw’s entire lineup, a total of 17 flavors, proved its Iced Tea Mango is the one to beat. As the team explained, the Iced Tea Mango has depth and “dazzling aromas that draw you in.” Coming in second place is the crisp and dry Pineapple, which proves the tropical fruit doesn’t have to taste mediocre when used in a boozy seltzer.

Truly’s collection of 22 flavors was also dissected by VinePair tasters. Passion Fruit led the pack with a “vanilla and toasted coconut quality” and a “remarkably fruity, tropical finish.” Orange followed in second, though the flavor has recently been replaced by a new flavor, Citrus Squeeze. Employing tequila, lime, agave syrup, and a can of Truly Grapefruit, the team created an inspired Paloma riff, while Campari, sweet vermouth, and White Claw Tangerine resulted in a citrus-forward Americano. Equally inspired is a reimagined Clover Club that excludes the egg white but otherwise stays true to the original flavor profile, with gin, lemon juice, simple syrup, and White Claw Raspberry.

Based on a blind test conducted by Business Insider, White Claw emerged victorious, unanimously stealing the gold from Truly. As the publication was surprised to discover, of the four White Claw flavors sampled — Natural Lime, Raspberry, Black Cherry, and Ruby Grapefruit — every one proved to be an enjoyable sipper.

And while the numbers don’t show this, for some beverage professionals, the two brands fall flat. As Margaret Link, director of marketing at Boochcraft says: “At the end of the day, neither brand is meaningfully distinctive from the other. I would be shocked if your average consumer could tell White Claw’s Black Cherry from Truly’s, well… Black Cherry. It’s all iterative, one-dimensional, and uninspired.”

But for Jeremy Danner, the on-premise specialist and brand ambassador for 4 Hands Brewing Company in St. Louis, Truly is his go-to. As he told VinePair, “I find myself rotating between [Truly’s] Lemonade and Berry mix packs most often. If I’m picking an outright favorite flavor, I’m going with Blueberry and Açaí.”