When Truly Hard Seltzer debuted in 2016, it’s safe to say no one saw what was coming. The brand is a leader in the now-ubiquitous spiked seltzer category, with sales volumes tripling in 2018 and likely to triple again in 2019. The upward trajectory is expected to continue in 2020 and 2021.

Read on for 10 more things you should know about Truly Hard Seltzer.

Truly is engineered to be easy-drinking. In every can or bottle, a fruit-flavored sparkler is waiting with just 100 calories, one gram of sugar, and 5 percent alcohol by volume (ABV). This has made it massively appealing among health-conscious buzz seekers.

Truly debuted in April 2016 as Truly Spiked and Sparkling, a brand it retained for nearly three years. In 2019, “Spiked and Sparkling” was quietly swapped out for “Hard Seltzer,” likely because its competitors use that nomenclature.

Truly beats almost all hard seltzer competitors except one: White Claw. Together, the nearly identical products comprised about 85 percent of total hard seltzer sales as of July 2019, with White Claw claiming an estimated 54 percent share, and Truly a 29 percent share as of August 2019.

You can drink Truly on ice.

Truly is the official hard seltzer of the National Hockey League. Truly’s parent company, Boston Beer, announced the five-year partnership with the NHL in September 2019. “Throughout the NHL season and into the Stanley Cup Playoffs and Final, Truly will engage with NHL fans in numerous ways, including trying new flavors as they are released,” Truly said in a press release.

Truly Hard Seltzer is not a cocktail…

Consumers as well as competitors of Truly like to describe spiked seltzers as “vodka soda in a can.” It’s not. There is no vodka, or even liquor, in Truly Hard Seltzer or most others. The alcohol in “spiked” seltzer comes from fermented cane sugar, which is made in a similar process to beer, except flavors and carbonation are added.

…But Truly Vodka Seltzer is.

Truly is always changing things up.

Additionally, Truly reformulates its recipes, recently announcing the revamp of 13 labels. The goal, according to the announcement, was to make the lightly boozy seltzer “even more crisp, clean, and refreshing,” as well as “more drinkable with no lingering bitterness.” In other words: as little like beer as possible.

For a recent advertising campaign, Truly tapped actor Keegan-Michael Key to star in 15-second ads that take swings at other alcohol styles. “Find a new use for your old drink [to] drink what you truly want,” Key says, while demonstrating the ways in which other booze can be used. For example, he waters a plant with a light beer, and polishes a chair with Scotch.

You can drink Truly on tap.

In August 2019, Boston Beer announced the launch of Truly On Tap, a plain-flavored variant available on draft in select locations. Other brands like AB InBev’s Bon & Viv have also released draft versions.

In November 2019, Truly and JetBlue announced the launch of Truly Hard Seltzer on select flights from the carrier. According to the companies, Truly Wild Berry was the first hard seltzer available in-flight. Likewise, JetBlue was the first and only commercial airline to serve the spiked sparkler. Incidentally, Truly Wild Berry was the preferred Truly flavor in a VinePair spiked seltzer ranking. 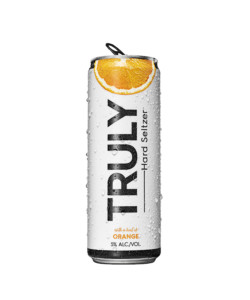 Truly Orange:
This seltzer begins with vibrant, fresh aromas, which recall freshly squeezed juice and expressed orange peel. While each sip is light and ... Truly Watermelon & Kiwi:
The devil’s in the details with this hard seltzer: The watermelon notes taste infinitely more realistic than many of its competitors, and ...