Marco Pierre White, the acclaimed British chef who made history in the 1990s after becoming both the youngest chef and the first in his country to receive three Michelin Stars, once described perfection as “lots of little things done well.”

The enfant terrible of London’s `90s fine dining scene might have been describing the intricately composed dishes for which he gained fame, but he could easily have been talking about cocktail creation.

When a mixed drink contains just two or three simple ingredients, both the quality of those components and the manner with which they are combined leave no place to hide, nor room for error. Nowhere is this better exemplified than the Whiskey Highball.

With just whiskey, sparkling water, and ice, the drink’s composition is straightforward, but many bartenders treat the Whiskey Highball as both a scientific equation and an art form. With honed technique and microscopic attention to detail, the humble, unremarkable mix of whiskey and soda water is at once elevated to something infinitely more impressive.

What to Do When Making a Whiskey Highball

Control the temperature of every component.

Deke Dunne, head bartender and manager at Washington D.C.’s Allegory at Eaton DC, describes the Whiskey Highball in the same way that Pierre White pictured the pinnacle of cooking. “Each one part of the process might not make a noticeable difference if you’re doing it on its own,” he says, “but if you care about every single step, all those little changes add up.”

For Dunne, the most important aspect of the drink’s preparation is temperature control. The objective is to keep everything as cold as possible, though the reason for doing so is not just refreshment. “The lower the temperature, the more carbon dioxide will remain captured inside the soda water, and the longer your drink will [retain its] fizz,” he explains.

To keep things cold and carbonated, Dunne calls upon a number of tactics. A slender Collins glass designed to hold fizz remains inside a freezer until it’s time to build. The whiskey and soda water, too, are chilled to an almost freezing temperature — “soda water at 32 degrees retains five times more carbon dioxide than soda water at 70 or 80 degrees,” he says — and the ice used in the drink is purposefully made for the job. (More on this shortly.)

Consider the profile of the base whiskey.

For Chad Vogel, the owner of three bars in Madison, Wis., and co-founder of the drinks consultancy group Three Count Beverage Co., the Whiskey Highball’s ingredients are just as important as its preparation.

“The most important thing is choosing the right whiskey,” he says. With the driving effervescence of the cocktail, a dram with an attractive nose will immediately stimulate the palate, before any sip is taken.

Given the inherent acidity of sparkling water (which arrives in the subtle form of carbonic acid), Vogel recommends whiskeys with a perceived sweetness. Something that’s heavily oaked with prominent caramel notes will counteract the water’s hint of acid, he explains.

Despite the fact that the spirit will be cut with sparkling water, Vogel recommends whiskeys in the “lower” proof range of 90 and below, rather than the overproof bottlings that are so prominent nowadays. Alcohol doesn’t equate to flavor, he says, and the effervescence only amplifies the spirit’s character, even as water dilutes it.

When it comes to the drink’s other main component, sparkling water, Vogel and Deke agree there’s no substitute for Topo Chico. The much-loved Mexican mineral water finds a home in another highball, Texas’s Ranch Water, and enjoys a reputation as being the fizziest on the market.

Dunne also favors it for its slight salinity (Topo Chico contains 41 milligrams of sodium per liter) and says this acts as the finishing seasoning touch for the cocktail. “It’s almost like throwing a pinch of salt into your cooking,” he says. “It enhances all the flavors.” 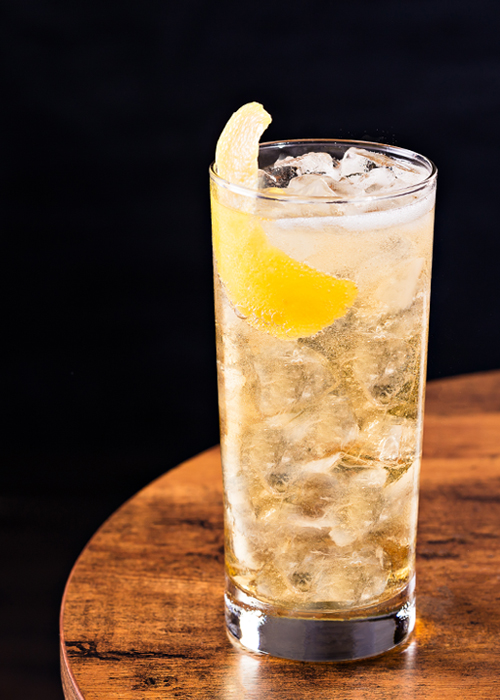 What Not to Do When Making a Whiskey Highball

Don’t underestimate the importance of ice.

Sparkling water only represents part of the dilution of the Whiskey Highball; there’s ice to consider, too, which also plays an important role in keeping the drink chilled and maintaining carbonation.

In the case of the latter, it’s not just temperature that plays a part. Pointing to the principle of nucleation, Dunne explains that bubbles are not naturally present in carbonated drinks, and form only when carbon dioxide comes in contact with solids, otherwise known as nucleation points.

The greater the surface area of solids inside a drink — i.e., ice — the more bubbles will form, and the quicker the cocktail will lose its fizz. For this reason, Deke prepares long “ice spears” that are perfectly clear and hand cut to the dimensions of his Collins glasses. (For more information on how to make your own, see VinePair’s guide here.) Using filtered water ensures that any dilution does not compromise the taste of the drink.

For those who don’t have time to freeze and carve hand-cut ice, there are a few simpler tips to consider that can elevate the drink.

Avoid fridge-made pebble or crushed ice, as this will dilute the drink too quickly. Instead, use cube trays and pay close attention to the conditions inside the freezer.

“You don’t want to use ice that already has an old, expired taste to it,” says Lucinda Sterling, bartender and co-owner of New York’s Middle Branch and Seaborne bars. “So make sure it’s a new ice — do your whiskey that favor.” And if you are making batches ahead of time, store inside a Ziploc bag once frozen to stop the ice taking on any aromas from the freezer’s other contents.

Don’t be afraid to color outside the lines.

Sterling approaches the Whiskey Highball with an experimental focus while also maintaining the “soul” of the drink. Where traditional recipes call for 2 ounces of whiskey, she encourages drinkers to taste for themselves. “Find out what your palate prefers,” she says.

Sterling doesn’t shy away from adding an extra ingredient or two, either. If mineral water provides a sprinkle of salt, a dash of bitters can play the role of pepper, bringing spice and an extra dimension to the drink, she says.

Be guided on which brand of bitters to use by the profile of the base whiskey. Angostura is rich in baking spice notes and a natural partner for bourbon. Peychaud’s serves a pop of cherry that marries with rye. “And you can’t go wrong with orange bitters,” she adds.

Switching up the mineral water for tonic is another surefire method for adding character and depth, and a bitter note many may appreciate. Beyond regular tonic water, for which she recommends Fever Tree, Sterling also sings the praises of flavored iterations, with London Essence Elderflower tonic and Town Branch bourbon a particular favorite combination. “Elderflower-flavor bourbon is the next big thing,” she says.

You read it here first.