Much like Frankenstein’s monster, hard seltzer is on a rampage. Strangely enough, the brand-new beverage category and misunderstood zombie have a lot in common: pieced together by innovative creators, jolted to life, and eventually evolved into a more mature invention that’s beginning to slow down a bit.

“The hard seltzer category is certainly volatile,” Maria Stipp, CEO of Stone Brewing in Escondido, Calif., says. Stone launched its Buenavida hard seltzer line earlier this year. “I think we all had to expect some amount of deceleration after such accelerated growth and loads of SKUs,” she says.

This slowdown hardly signals a death knell for the breakout beverage alcohol segment of 2020, despite much hand-wringing and ominous predictions of its inevitable collapse. Bart Watson, chief economist for the Brewers Association, said in a tweet thread on Aug. 27 that “hard seltzer is now essentially flat YoY [year-over-year] in scan data.” Basically, hard seltzer’s meteoric — and surprisingly long-lasting — growth was impressive, but impossible to sustain indefinitely. We’re just beginning to grasp what the future might look like for the bubbly booze.

Hard seltzer fans needn’t fear. This supersegment is likely just finding its footing after trampling pretty much every other beverage alcohol option in its path. It even outpaced Bud Light in off-premise sales for the first time ever, according to IRI, knocking America’s No. 1-selling beer off its pedestal with over $3.3 billion between Jan. 1 and Aug. 8, 2021. This timeframe proves two things: Hard seltzer is here to stay, and it’s no longer just a summer sipper.

This flavor preference swap is echoed across other top-performing hard seltzer brands as well, according to Paquette. “Truly’s the second-best-selling hard seltzer brand on Drizly, berry variety pack has been their top seller this summer compared to the lemonade pack last summer,” she says. “Meanwhile, their new punch variety pack broke into the top 10 SKUs this year while the tropical and citrus packs moved down in ranking.”

According to bar inventory app Backbar, in the United States, black cherry has been the leading flavor in its approximately 10,000 clients’ on-premise hard seltzer sales for three years running, followed by mango, lime, berry, grapefruit, pineapple, watermelon, strawberry, raspberry, and punch. However, citrus-forward flavors like lime and grapefruit are trending down as more tropical options (like pineapple) hold steady. Considering that of the major hard seltzer producers, only Truly offers a punch flavor (White Claw, Bud Light Seltzer, High Noon, or BON V!V do not), its inclusion as a top-10 flavor goes to show how dominant the Boston Beer-owned brand remains in both sales and flavor innovation — and how single producers can send a ripple effect across the entire industry. A few forward-thinking brands may be next when it comes to influencing popular taste. Over the past few years, hard seltzer has seen a seasonal spike every summer, which makes sense due to its nature as a light, low-calorie, sessionable beverage with flavors that lend themselves to heat refreshment and escapism. But every fall brings a seasonal shift to “cozier” flavors like pumpkin and cinnamon. Hard seltzer is finally catching on. This autumn, Bud Light will release a Fall Flannel variety pack with pumpkin spice, toasted marshmallow, maple pear, and apple crisp flavors. Bud Light vice president of marketing Andy Goeler calls this a “new innovation” specifically designed to attract drinkers even after summer ends.

Does this shift indicate that consumers value “new” flavor offerings over flavor itself? Possibly, says Stipp. “It seems an average seltzer with predictable flavors isn’t going to fly off the shelves like it used to. Innovation is what’s driving the hard seltzer category growth now.” She goes on to compare “adventurous” hard seltzer consumer habits as reminiscent of the early days of the craft beer revolution, when chasing the next new release became the driving force for hardcore beer fans rather than seeking reliable favorites.

In a paywalled article, Beer Business Daily points out that this summer’s seltzer winners share a common trait: all of them are new variety packs. The top five fastest-growing hard seltzer products from 2020 are now relegated among the 10 products facing the steepest declines in 2021 so far. But despite BBD’s report of deceleration across the category (down 8.8 percent in volume this summer) and individual product losses (like White Claw’s Variety Pack No. 1), IRI data remains reassuring for the segment at large. 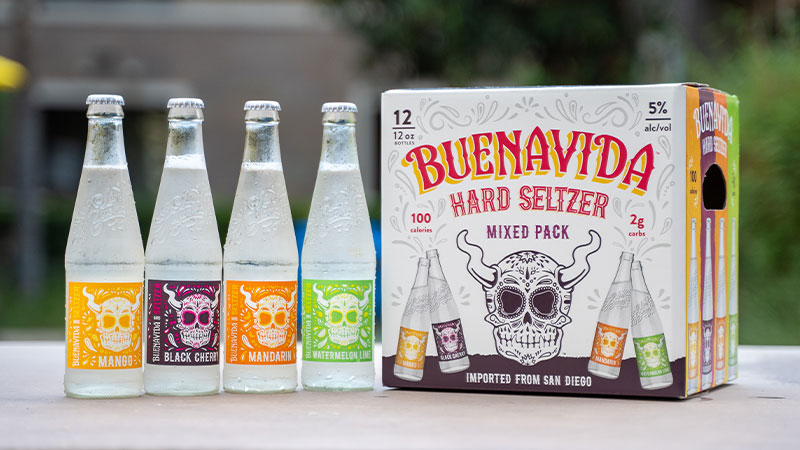 A Look at the Future

This transformation of preference toward the “new” is likely to present a challenge for smaller or younger hard seltzer brands hoping to capture a slice of the $4.4 billion global industry. Stipp says Stone plans to put “a lot of time and resources into coming up with flavors that stand out and taste really good,” indicating a shifted focus toward rotating rather than core flavors for Buenavida.

Besides flavors, brands must also find other ways to stand out on the shelves, occasionally tapping into unique visual cues like packaging rather than relying solely on chasing the flavor du jour. Stone’s Buenavida line is one such outlier, using 12-ounce bottles rather than the seemingly ubiquitous skinny cans to set themselves apart.

Another option, most prominently explored by White Claw’s Surge line, is tapping into the higher-ABV market in both individual offerings as well as variety packs. And there’s always boozy popsicles. “We see innovation as more than just flavor,” says Truly’s Lysyj. “This summer we released Truly Freeze Pops and the response was incredibly positive — they are currently No. 1 in sales volume and velocity among all alcoholic freeze pop SKUs,” according to IRI data through Aug. 15.

Hard seltzer may have its foot off the gas, but it hasn’t pulled the emergency brake quite yet. In fact, seltzer’s speed is less telling than the directions it’s headed. Will it continue to take cues from fickle consumers passionate about flavor exploration, or rely on consistency to continue on the trajectory that’s served it so well? Time will tell, but even hard seltzer haters have to admit: It’s fun to watch the ride.