Although they were inspired by and taste very similar to vodka sodas, most spiked or hard seltzer brands contain no distilled spirits. Instead, the popular canned drinks are flavored malt beverages, which get their alcoholic kick from brewed cane sugar.

In 2012, Connecticut-based beverage entrepreneur Nick Shields was in a dive bar in Westport, Conn., when he saw five women order vodka sodas, one after the other. It gave him an idea. Working in the beer industry at the time, Shields decided to recreate the popular cocktail drink in a brewed, canned form. It took him around a year and nearly 100 batches to refine the recipe, but in 2013, he launched SpikedSeltzer.

The drink was a quick success and soon inspired an entire category bearing the same name. Shields cashed in on the success and sold the brand to Anheuser-Busch InBev (AB InBev) in 2016, for an undisclosed fee. Three years later, the drinks conglomerate enacted a complete rebrand and relaunched the beverage as Bon & Viv Spiked Seltzer.

From its Super Bowl debut, to its deep-anchored nautical roots, here are 10 more things you should know about Bon & Viv Spiked Seltzer.

Since SpikedSeltzer’s 2013 debut, a host of imitator brands have followed, including what are now the category’s leaders: White Claw and Truly Hard Seltzer. In six short years, the hard seltzer category spiked to what’s now valued at over $1 billion.

While nobody could have predicted the meteoric rise of spiked seltzers, Shields was on course to becoming a successful brewing entrepreneur. After graduating college, Shields’ first job was managing production for Boston-based juice company Nantucket Nectars. He then gained winemaking experience at Long Island’s Wölffer Estate, before returning to school to study food science at Cornell University, and then fermentation science at UC Davis.

Shields developed products for Pepsi and Schweppes, then accepted a management position at Boston’s Haffenreffer Brewery, which was founded by his great-great-grandfather, Rudolph Haffenreffer, in 1870. It was during this stint that he was inspired to create the world’s first hard seltzer.

In February 2019, AB InBev showcased the rebranded Bon & Viv Spiked Seltzer in a Super Bowl ad. In doing so, Bon & Viv became the first — and to this day, only — hard seltzer to run a commercial during the sporting event.

Called “The Pitch,” the commercial showed the brand’s fictional founders, mermaids by the names of Bonnie and Vivian, who pitched their flavored alcoholic seltzers to a group of investor “sharks.” Chelsea Phillips, vice president of AB InBev’s “Beyond Beer” division, told AdAge, “The spot itself [was] not only a pitch to the investors, the sharks, but a pitch to the American public.”

In August 2019, Bon & Viv announced a new partnership with the NFL. The deal made Bon & Viv the league’s first official spiked seltzer sponsor, and saw 16-ounce cans of Bon & Viv Classic offered in 27 NFL stadiums nationwide. The announcement was made in a video starring sports analyst and the NFL’s “truth-teller,” Adam Schefter, who was hooked up to a polygraph while announcing the deal.

Leading up to Bon & Viv’s official NFL partnership, the brand launched the #SeltzerShowdown ad campaign, which pitted its Classic flavor against White Claw’s Pure in a taste test. As part of the campaign, AB InBev offered 50 consumers the chance to win $1,000 if they truthfully revealed their preference while hooked up to a polygraph. Just four of the tasters who claimed to prefer White Claw passed the polygraph.

On the face of it, “Bon & Viv” seems to just be the shortened names of the brand’s fictional founders. But the name was inspired by the phrase “bon vivant” and born from AB InBev’s effort to stand out in the already saturated spiked seltzer category.

When SpikedSeltzer rebranded as Bon & Viv, the process involved a lot more than a name change and a packaging update. The company introduced a new range of flavors, lowered the drink’s alcohol content from 6 to 4.5 percent ABV, and slashed sugar content to reach lower calorie and carbohydrate counts.

Bon & Viv is one of the ‘healthiest’ hard seltzers.

While no alcoholic beverage can be described as healthy, Bon & Viv boasts one of the lowest calorie contents of the leading hard seltzer brands. Each 12-ounce pour serves 90 calories, as well as 1 to 2 grams of carbs and 0 grams of sugar.

The brand has deep-anchored nautical roots.

Right from the start, Shields says he wanted to give his brand a nautical theme. “At first we thought about Neptune [but] he seemed to be too aggressive,” he told AdAge in 2016. “We wanted the look to be feminine and strong and a powerful mystical feature [sic]. So the mermaid, she fit.” One mermaid then turned to two, when the fictional Bonnie and Vivian “founded” Bon & Viv Spiked Seltzer.

Meanwhile, Bon & Viv’s current headquarters is located at 140 Water Street in Norwalk, Conn., and its phone number is 1-86-MERMAIDS.

While its main rivals serve standard fruit-flavored hard seltzers, Bon & Viv offers complex combinations among its 10-plus variations, including such botanical combos as Black Cherry Rosemary and Clementine Hibiscus. Both of these happened to rank among VinePair’s favorite spiked seltzers in a thorough taste test conducted earlier this year. BON V!V Clementine Hibiscus:
One of many enjoyable flavors from BON V!V's esoteric range of flavor combos, this expression serves up convincing clementine and fragrant ... 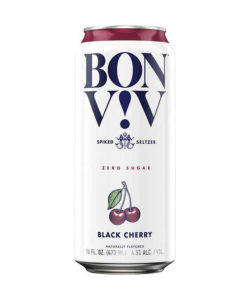 Bon & Viv Black Cherry:
Bon & Viv recently underwent (another) packaging rebrand, all but losing the mermaids in favor of a simpler, more sleek design. The ...