You’ve purchased your favorite spirits and squeezed fresh juices. You’ve got your shakers and mixing glasses, and your glassware shined up nice.

If you’re planning to swing by the gas station for a bag of ice before your cocktail party, think again. There’s so much more to ice than filling a few trays and calling it a day.

Erick Castro, founder of Rickhouse and Bourbon & Branch in San Francisco, Polite Provisions and Raised by Wolves in San Diego, and Boilermaker in New York City, considers ice not only an important ingredient, but an essential one.

“Very often, it’s the one we give the least attention to,” he says. “Whether that water is coming out of your tap, or it’s coming in the form of pebbles, whether your dilution is coming from a blender or from shaking, it’s all going to have a direct impact on the quality and integrity of the cocktail when you’re done.”

The type and quality of your ice can make a big difference in how your cocktail tastes, and much of that comes down to science.

Ice does two things to your cocktail: cools it down and dilutes it. But don’t believe the myth that all dilution is a bad thing. Research has shown that a little bit of water actually opens up some spirits, by emphasizing some aromas and masking others. Correlatively, the shape and size of your ice impacts how quickly it melts and how much water gets into your cocktail. That’s why it matters whether you use big rocks, standard cubes, or crushed ice.

When it comes to dilution, control is key. Former bartender, beverage writer, and Washington State Bartender’s Guild founder Andrew Bohrer calls minimizing dilution a “false dichotomy … You don’t want to minimize dilution; you want to get the right dilution and moreover, you want some control over the dilution,” he says. “Using higher-quality ice gives you more control, and can result in a better drink.”

When to use big cubes

Best for: Spirit-forward drinks like a Manhattan or Vieux Carré. 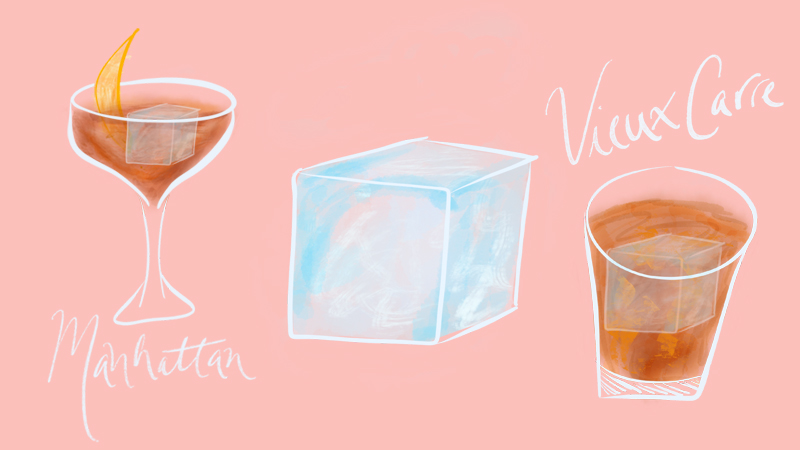 If you’ve been to a cocktail bar in the last five years, you’ve probably seen those giant ice cubes that fill up most of the glass. Serving a spirit-forward drink over those large rocks will add less water to your drink, over time.

With big ice, “that drink temperature and dilution are going to stay consistent for a pretty extended period of time,” Castro explains. “If you have a really nice whiskey or a really nice bourbon, you want to serve it over a big rock, because then you have a long time to finish it before it turns into a swamp.” Castro calls large ice your “insurance policy” against ice melting quickly and turning your drink watery.

Serve spirit-forward drinks over big ice, or splash a few fingers of your favorite whiskey, rye, or Scotch over those. Just don’t stir with them, because they melt too slowly to properly cool your drink. In “Liquid Intelligence,” Dave Arnold writes that shaking with a larger ice cube can improve the texture of the finished drink, although it will mess with dilution. “I don’t know why the big cube does a better job; it just does,” he writes. Big rocks don’t move around as much in a shaker, so add a few smaller cubes if you want more dilution.

When to use crushed, cracked, or pebble ice 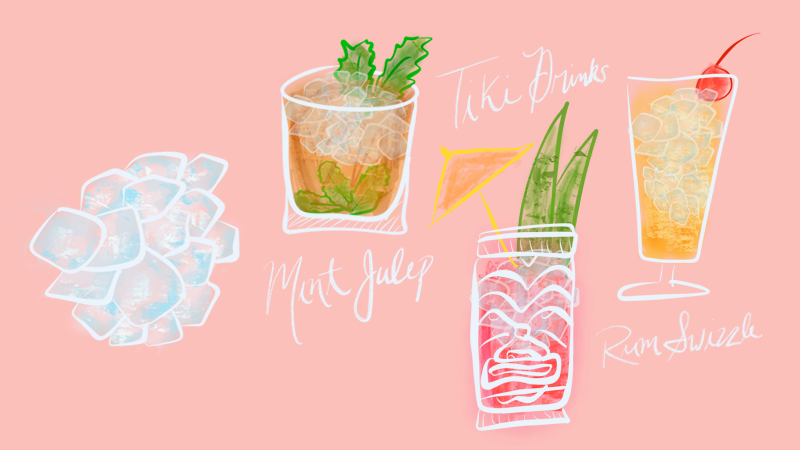 Some drinks benefit from a big old pile of crushed ice, especially those that are designed to be served in warmer climates or use a lot of fancy syrups and juices. Because the tiny pebbles will thin out syrups and juices, they work well for those types of drinks — call it the snow cone effect. If you’re whipping up a refreshing Mint Julep, a boozy tiki, or Rum Swizzle, you’ll want crushed or pebble ice. That will add just the right amount of dilution to these spirit-forward cocktails, while keeping them consistently chilled.

“Dilution is part of the cocktail experience,” Castro explains. “That’s the case with something like a Mint Julep that’s on pebble ice or crushed ice. I don’t think it’s a coincidence that a lot of those drinks come from [hot] climates. He adds, “I’m a firm believer that you can’t separate a cocktail from the culture that created it.”

The most important consideration with crushed ice is how much water it gives off. Since it’s made up of a lot of small pieces, crushed ice can get watery very quickly, and that could dilute your drink faster than you want. Note that, according to Arnold, cloudy ice shatters more easily, so if you’re working with standard freezer ice, be aware of that.

For home bartenders, a Lewis bag and a wooden mallet will give you a fun way to work out any mid-party aggression, while the bag absorbs any excess water. If you don’t have those, a dish towel and a meat tenderizer will do. If you’re having a party and don’t want to stand behind a hammer all day, head to Sonic. Yes, the drive-in. They use Scotsman ice machines that make that pebble ice bartenders love. They’ll sell you a bag for a couple of bucks. Castro, who clued us in to this method, likes their ice for keeping the drink-making — and the party — going strong.

When to turn to ice shards, cracked ice, or Collins spears

Best for: Highballs like a Gin and Tonic or Whiskey Soda. 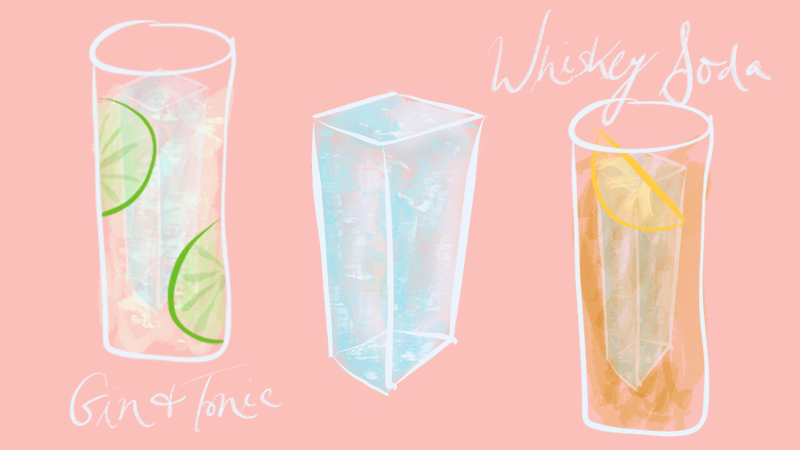 You can just as easily stack a quartet of standard ice cubes in a Collins glass (more on that later) but if you want your drink to look really cool, Collins spears or ice shards do the trick.

“Collins spheres definitely put on a great show,” Castro says. “They are really cool, but the thing is, they look so much cooler when they’re clear and it’s really tough to make them clear.”

If you really want to make clear ice without investing in a fancy machine, use Camper English’s cooler method, which employs a technique he pioneered called “directional freezing.” Fill a large Igloo or similar cooler in your walk-in or large freezer and leave the top off. The water will freeze from the top down only, since the sides are insulated. That way, only the bottom 25 percent or so of the cooler will remain cloudy.

Chisel off shards of the clear part and you’ve got yourself shard ice that approximates Collins spears without a fancy mold.

You can also make cracked ice this way. Cracked ice will cool down your drink faster, especially when stirring. However, with varying-sized pieces, be aware that you do sacrifice some dilution control.

Standard cubes take you the rest of the way

Best for: Pretty much everything else. 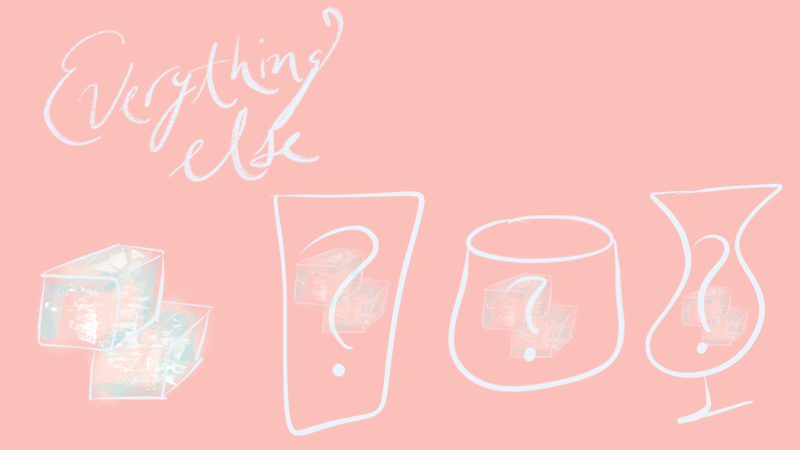 Standard, one-inch-by-one-inch cubes are the workhorse of the ice world. They are great in pretty much every cocktail, and if you use cubes that are all about the same size, they’ll also melt consistently. Believe it or not, ice does have a shelf life — about two weeks, depending on what else you have in your freezer.

“If you don’t use your ice very often, store it in a plastic bag, because your ice will start to pick up ambient flavors from your freezer,” Castro says. “You’ll pour a little Japanese whiskey over an ice cube and go, ‘This tastes like frozen pizza.’”

Most people can get away with freezing water right from the tap, but use this rule of thumb: If you wouldn’t drink your tap water, don’t use it to make ice. The main issue home bartenders run into with standard cubes, according to bartenders, is not having enough. “For the home bartender, my number one tip is that you always need more ice than you think you do,” Bohrer says. “You do need to fill the entire shaker with ice, and then move your ingredients around through that.”

When filling your glass, Bohrer advises making sure your ice never floats. Believe it or not, too little ice in your glass will actually mess with your dilution. “If your ice is floating, that means you’ve got too much cocktail and not enough ice. Stop before the ice starts to float, and you’re already on your way to making a much better cocktail,” he says.

Can I just use ice machine ice?

Let’s say you’re having a party in your hotel room and you’ve only got ice from the machine down the hallway, or you run out of cubes mid-event. Don’t panic. “I actually kind of prefer to use really crummy ice to make drinks,” Bohrer says. “I want one bad ice machine just for shaking cocktails.”

If all you have is chip ice with a lot of surface area and a high melt rate, make your drink tight, or with more alcohol and less water. That will compensate for inevitable faster ice melt. When shaking drinks with store-bought ice, shake hard and fast. “Don’t shake it too long, or the drink is just going to turn into a swamp and be super, super over-diluted,” Castro says.

Finally, keep your ice as dry as possible. And if you have to use store-bought ice, taste it first. Remember, ice is a third of your cocktail.

“It’s not an afterthought,” Castro says. “It deserves just as much thought as the spirits or the bitters or the fresh juices or whatever else you’re putting into the drink.”