Since its American arrival in the 1960s, Crown Royal has grown to become the top-selling Canadian whisky brand in the United States. Its story is a grand one, but at the core of each of its whiskies, you’ll find a humble blend that has stood the test of time. And while there are plenty of incredibly tasty Canadian whiskies worth sampling, why not start with the brand that’s famously “Fit for a King” and swathed in purple velvet?

Here are 14 things you should know about Crown Royal and its growing kingdom of Canadian whiskies.

In 1939, King George VI and Queen Elizabeth sailed to North America to travel the land. The first stop on their trip became a historical moment for Canada, as it was the first time reigning monarchs had visited the country. It was also a defining moment for a soon-to-be spirit brand. After hearing the history-making news, a Canadian distiller set out to create a whisky fit for the royal guests, and presented in a velvet bag for good measure. The whisky he presented was so well-loved by the regal visitors that it become known as Crown Royal. The couple left carrying 10 cases for their train journey across the continent.

At its start, Crown Royal was only sold in Canada.

After the royal couple’s departure, news of the exceptional whisky beloved by a king began to spread throughout North America. But Crown Royal was available only in Canada until the 1960s, when it was first introduced to international markets. Since its stateside debut, Crown Royal has become the top-selling Canadian whisky in the U.S.

American non-patriots, that is. During the American Revolution, an estimated 15 to 25 percent of the [U.S.] population remained loyal to the crown. Their solution? Head up north, where they could continue to genuflect to the aristocracy. Thankfully, some loyalists became what were known as “gristmill” (grain-grinding) operators, eventually repaying their abandonment of America with delicious Canadian whisky.

In 2018 Crown Royal partnered with Packages From Home to launch The Purple Bag Project as a way to support troops. Through the program, the whisky brand sends care packages of items including food, toiletries, and small clothing items — all housed in their iconic purple bag to active American military heroes overseas. In two short years, the project was able to send over one million bags to service members as well as civilians that had been affected by natural disasters. Today, the efforts of The Purple Bag Project continue. Those interested in donating can find more information on the brand’s site.

Crown Royal is a master of mystery.

You could say that the rules for whisky production in Canada are lax compared to those in America. Unlike American “rye whiskey,” which legally must contain at least 51 percent rye, Canadian whisky can have zero, some, or a whole lot of rye in its mash bill.

Many whiskies tout the fact that they’re pot-distilled, as the squat, rounded pot stills allow for greater extraction of congeners (flavor globules). Column stills are more often used (as is the case with vodkas like Absolut) for their efficiency — no cleanup between distillations required — and ability to strip congeners from the distillate. Crown Royal stops well short of stripping away flavor, using its 12 column stills to efficiently blend together corn, barley, and rye distillates with aforementioned legally unconstrained abandon.

One of the only unifying rules of Canadian whisky is aging: All whiskies have to be aged a minimum of three years, though a lot get a lot more time in the barrel. What kind of barrel, you ask? Well, there’s some wiggle room. While in the U.S., bourbon whiskey can only be aged in charred new oak barrels, the Canadian Crown Royal is under no such scrutiny. That’s how you get one company putting various proportions of corn, barley, and rye whisky into anything from virgin, charred new oak and/or re-used charred new oak barrels, to Cognac and Cabernet Sauvignon casks. The flavors can span everything from spice and dried fruit to subtle smoke, vanilla, and caramel.

With three series collections and a line of RTD canned beverages, there is a Crown Royal for every whisky drinker. The brand’s Signature Series includes the original Deluxe, Crown Royal Rye, Crown Royal Black, and Blender’s Mash. For the whisky enthusiast, the Master series includes six additional variations, including an 18-year aged winter wheat and a Cognac barrel-finished whisky. The flavor series is ideal for use in a range of cocktails including variations on classics like the Gold Rush, Manhattan, and Old Fashioned. It includes Crown Royal Apple, Vanilla, Salted Carmel, and the elusive Peach flavor. Plus, in the spring of 2021, Crown Royal released a series of canned cocktails which includes Peach Tea, Washington Apple, and Whisky & Cola. It later launched its limited release Whisky Lemonade.

Crown Royal is produced in Manitoba, a central province just north of North Dakota and Minnesota. Crown Royal hails from a small town within Manitoba called Gimli, which is also the name of an ax-wielding, elf-insulting, fearlessly questing dwarf from J.R.R. Tolkien’s “The Lord Of The Rings.” True to the name — which in Norse means “Home of the Gods” — Gimli is home to epic statues like this one. The next time someone says the purple bag is lame, go all Viking on them.

Hillary Clinton is a Fan.

In 2008, a fuzzy video showing the former first lady and secretary of state enjoying a dram of the Canadian spirit surfaced online. Though she doesn’t finish the entire shot for the almost certain need to be clear-headed, she does note that Crown Royal is indeed a good whisky.

Crown Royal sparked a heated debate about it being the best.

In 2016, “Whiskey Bible” author Jim Murray, bravely named Crown Royal’s Northern Harvest Rye the best whiskey in the world, with nary a Scotch in sight in the top five. The nomination was even more astounding considering Northern Harvest — which costs less than $50 — tied with the previous year’s winner, Yamazaki’s then-$160 Single Malt Sherry Cask 2013, with an all-time high score of 97.5.

In 1943, Seagram’s then-president Samuel Bronfman explained to rabbinical student Solomon Maimon that his first two attempts at distilling the whisky that would become Crown Royal were miserable failures. But from those not-so-good attempts came Crown Royal Deluxe — the flagship whisky of the Crown Royal brand. The signature recipe was salvaged when Bronfman’s own rabbi told him to imbue the whisky with a spiritual purpose, yielding a smooth blend of no fewer than 50 whiskies — thus giving birth to a now-international drinks empire. Incidentally, the Crown Royal symbol and iconic purple bag look a lot like the Jewish keter malchut crown and tallit, or prayer shawl bag, respectively.

In February 2019, Crown Royal released Crown Royal Peach as the newest addition to its flavor series lineup with the intention of it being a spring seasonal release. But even with the success of Crown Royal Regal Apple, no one could foresee just how popular the flavor would become. Crown Royal Peach sold like wildfire and almost immediately after its debut became the elusive bottle that customers and bar owners clamored to get their hands on. It became so popular, in fact, that many liquor stores across the country began limiting its sales to just one bottle per customer. Luckily, the hype has since died down, and customers can now easily find the once mystical “unicorn” bottle for sale online. 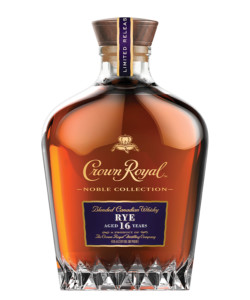 Crown Royal Noble Collection Rye Aged 16 Years:
No, your eyes do not deceive you: This is a 16-year-old rye that retails for less than $80 — and it's widely available. Those numbers ...