The Story Behind The Cinnamon Bun Sipper

My nan’s cinnamon buns inspired this drink, which combines spicy rye, cinnamon syrup, and Chila ‘Orchata, a beverage made with Puerto Rican rum, cream, Tahitian vanilla, and cinnamon. While each ingredient is pretty tasty on its own, all together it’s really reminiscent of a cinnamon bun — and sure to be a hit during the holidays and all year long. The Tiki Bonfire Cocktail:
This tiki cocktail uses two types of rum and several fruit juices, yet maintains its bright, balanced flavors. Learn how to make it with this easy recipe. The Toasted Coconut Sour Recipe:
Wintry pomegranate and tropical coconut come together in this white rum sour. Learn how to make the cocktail and its toasted coconut syrup with this recipe! The Blackberry Mojito Recipe:
A twist on the classic mojito with fresh blackberries, this recipe can be easily adapted to suit whatever fresh fruit you have on hand. The Mandarin Bramble Recipe:
This twist on the classic bramble cocktail uses white rum, fresh mandarin orange juice, and pomegranate syrup. Get the recipe and learn how to make it here. 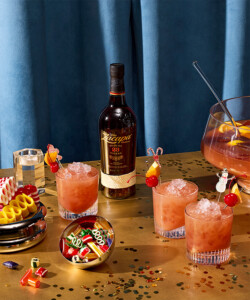 Holiday Rum Punch:
Nothing pulls a holiday party together like a classic rum punch.