The Story Behind The Apple Martini

The Apple Martini, also known as the “Appletini,” is a bright green drink that defines the neon style of the ‘90s. The concoction was inspired by the inside cover of the July 1972 edition of Playboy, in which Smirnoff ran an ad highlighting its new Adam’s Apple recipe. The drink consisted of apple juice and vodka at the time, but it was reinvented by a bartender named Adam Karsten in 1997 using a mixture of Ketel One vodka and apple schnapps. Today, the recipe has evolved to also include orange liqueur.

With the color and flavor of green Jolly Ranchers, the sweet, sugary drinks belie their strength. Whip up a round of these when you want to party like it’s 1999. How much sugar is in an Apple Martini?

There are 13 grams of sugar in an Apple Martini.

An Appletini carries a crisp, juicy green apple flavor that has been described as tasting like a green apple Jolly Rancher.

Who invented the Apple Martini? The Midori Sour Recipe:
The Midori Sour is making a comeback. Explore the depths of Midori, a bright green, melon-flavored liqueur that pairs well with summer. The Petal Pusher Recipe:
With Cardamaro, St-Germain, Godiva chocolate liqueur, and Prosecco, Gates Otsuji has created a subtle drink that can also be the life of the party. Southpaw:
A smoky delight, the Southpaw features a mezcal reposado base and two types of sherry for a unique flavor blend. Check out the recipe here! The Fuzzy Navel Recipe:
While it might be saccharine for some, a well-made Fuzzy Navel can be the sweet treat you didn’t know you needed. Read on for the recipe! 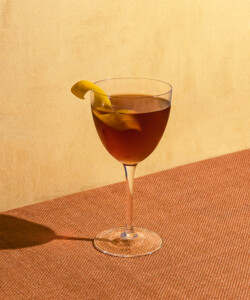 Bobby Burns:
A riff on the Rob Roy, the Bobby Burns is a deep amber-colored cocktail brimming with a burst of citrus to counter sweet and savory notes.