Scotch can be a difficult drink for Americans to get into. Whether it’s due to hard-to-pronounce names, or the perception of Scotch as a serious drinking man’s drink, there’s an intimidation factor associated with Scotch whisky on this side of the Atlantic. But it doesn’t have to be like this. Take Scotland for example, the birthplace of Scotch, where cocktails are served with a heavy dose of Scotch whisky. The liquid basically runs in streams through cocktail programs across Edinburgh. And the Scottish believe that Scotch is for everyone.

“There’s no restrictions on getting into Scotch whisky,” Jon Linstead, a bartender and bar manager in Edinburgh, Scotland, tells me.

His name is Jon, but his friends call him Jonny, and he comes off like a man who lives and breathes cocktail culture. Linstead’s bartending attire is a comfortable short-sleeve button-up, black pants, and a black fedora. Tattoos cover his arms. On his left hand there’s a wolf, and an angel rides an eagle on his upper left arm. It’s his right arm that’s most telling, though. On the underside of his arm stretching nearly from his elbow to his wrist is the Johnnie Walker Striding Man with the slogan “Keep Walking” beneath it.

I’m sitting across the bar from Linstead at the Voodoo Rooms cocktail bar in Edinburgh. As he’s pulling up drinks, serving tastes of Scotch whisky neat, and mixing new concoctions, it occurs to me that there’s a thing or two people outside of Scotland can learn about drinking the country’s most famous export. And Linstead is the perfect teacher.

So, without further ado, here are the four ways to drink Scotch according to a Scottish bartender. Water opens up new whisky flavors while decreasing the intensity of the alcohol. The Society of Chemical Industry studied this phenomenon in a paper published in the Journal of the Science of Food and Agriculture. The scientists found that water chemically suppresses ethanol molecules (alcohol) as well as the flavors extracted from the wood barrels. Specifically, water decreases the “impact of undesirable, immature aromas when wood matured spirits are consumed.”

The stronger whiskies, as well as whiskies with more barrel influence, improve with water. Take cask strength, or barrel proof, whiskies, for example. The alcohol percentage decreases as Scotch ages in barrel, so the liquid is typically put into the barrel at around 60 to 65 percent alcohol by volume. That’s why Linstead suggests adding a couple drops of water to your dram if you’re drinking cask-strength Scotch.

In other words, contrary to what you may have thought, adding water to your whisky isn’t for people who can’t handle their whisky; it’s for people who want to take stock of every flavor the whisky has to offer. During a VinePair tasting at the Glenkinchie distillery in Scotland, everyone — from the distillery workers to our tour guide to the global brand ambassador for Johnnie Walker — used a small pipette to add some water to their Scotch.

Quick side note: Water can make a whisky appear hazy depending on how the whisky was filtered. There’s nothing wrong with a hazy whisky and it won’t change the drinking experience. Just think of it like absinthe, where the haziness from water is actually desired and part of the drinking ritual. Drinking Scotch neat means deciding on a drinking vessel. The options here are nearly limitless and range from Solo cup to rocks glass to whisky snifter. If you’re drinking for taste appreciation, though, stick to the latter, Linstead says.

Whisky snifters have a large bottom that tapers toward the top like a tulip. In theory, this traps the whisky aromas in the glass and concentrates them all in one place. But on a casual night out with friends where you’re focusing more on the environment than your beverage, drinking from a rocks glass is perfectly fine (which is good, because nine times out of 10, that’s what the bar is going to give you). First things first: Always make sure good, clean ice is used if you want to use ice. Once that’s settled, you can put it in your drink.

Some whisky devotees will scoff at the idea of chilling your Scotch and diluting it with melting ice. But for people just getting into whisky, ice can be very beneficial.

Cooling a drink depresses dominant alcohol flavors and aromas, making the drink more accessible. It will also, however, mask some of the flavors that make Scotch taste like Scotch. Much of the opening up that happens from the addition of water becomes moot because the low temperature erases any “opened-up” flavors.

If you’re going to use ice regardless, use large blocks of ice that slowly melt and take up the majority of space in the rocks glass. That way you get the chill without turning your whisky into a five parts water, one part whisky mixed drink.

Served in a Cocktail 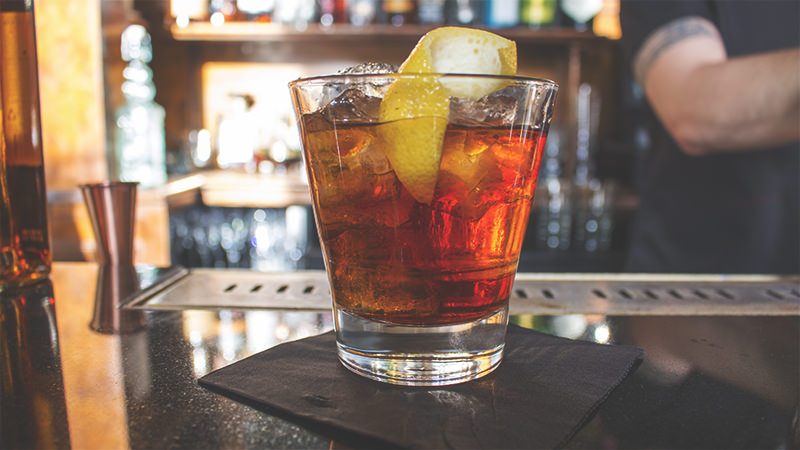 Scotch isn’t just for stodgy old men with cigar-stained teeth. It’s for people who love experimentation — and it always has been.

At Johnnie Walker, one of the largest Scotch brands, blends are made “from the bar back,” Ewan Gunn, the global ambassador for Johnnie Walker, tells me while we try one of Johnnie Walker’s newest blends, the Blenders’ Batch Triple Grain American Oak. So while yes, Scotch is delicious on its own and with a couple drops of fresh water, it’s also an incredible addition to cocktails. In fact, it’s always been that way, Linstead says.

Take the Rob Roy, for example, which is essentially a Manhattan made with Scotch instead of rye whiskey. The cocktail was invented around 1900 in New York City’s Waldorf-Astoria. Cocktails and mixed drinks continue to be a big part of the Scotch whisky story, especially in places like Edinburgh, the capital of Scotland.

There’s the Johnnie and Ginger, which is simply Johnnie Walker Red Label with fresh ginger ale, and the slightly more complicated Penicillin cocktail. Swap out Scotch for American whiskey in cocktails like the Boulevardier, Old Fashioned, or Mint Julep for a smokey rendition of a classic.

Disclosure: Diageo, the parent company of Johnnie Walker, is an investor in VinePair.