Love it or hate it, celebrity-backed tequila is here to stay. A seemingly never-ending wave of the agave spirit promoted by big name actors, musicians, and athletes is already on the shelves or heading to a liquor store near you.

And the timing isn’t coincidental. Tequila is increasingly popular in the U.S. Following actor George Clooney’s major success with Casamigos, Dwayne “The Rock” Johnson is also following suit, cashing in on this agave-fueled boom with his company Teremana.

Whether Teremana will become a favorite and garner awards like Casamigos remains to be seen, but the brand is already off to a promising start. Whether you’re team Clooney or can smell what The Rock is distilling, keep reading to learn more about the difference between Casamigos and Teremana, and how these two tequilas stack up.

Clooney and longtime pal Rande Gerber decided to create their own tequila recipe while living in the same neighborhood in Mexico. In 2013, along with their friend and real estate developer Mike Meldman, the trio officially launched Casamigos. It took a mere four years before the massive spirits conglomerate Diageo acquired the brand for $1 billion in 2017.

Johnson, along with three co-founders, released Teremana in March 2020 after teasing the product for years. As VinePair reported, Teremana celebrated “one of the biggest debuts for a new-to-world brand in history.” Sales haven’t shown any sign of letting up. The company told The Spirits Business it is building additional brick ovens and pot stills to keep up with the “unprecedented demand,” with the potential of becoming a “million-case brand.” 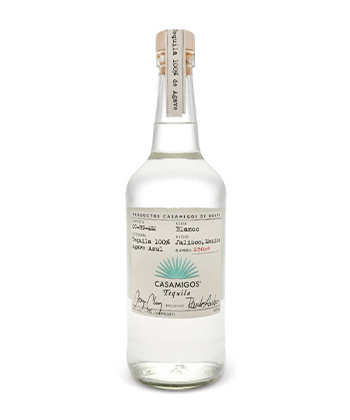 In order for a product to be called tequila, it must be made with at least 51 percent of the blue agave plant, also known as agave azul. But for many tequila aficionados, 100 percent blue agave is the only way to go. Teremana and Casamigos both check this box; made with 100 percent Blue Weber agave grown in the highlands of Jalisco.

When comparing the two, Matt Corbin, the beverage director at 7908 in Aspen, Colo., takes note of each brand’s production methods. “Both products are roller mill extraction, twice distilled 100 percent Blue Weber agave but differ a little in the still where Casamigos is using a stainless pot with a copper coil and Teremana is using a copper pot still. Also, Casamigos is using well water and Teremana is using… not sure.”

Teremana touts a focus on transparency, a trait uncommon in the tequila industry, with production and nutrition details on its labels. Clooney, Gerber, and the company’s master distiller boast that they personally taste every batch of Casamigos for quality.

But for Corbin, Teremana’s detailed label doesn’t matter much in terms of value. “Casamigos’ [label] has less going on, which is more of a plus for me,” he says. “I don’t need to be wooed with pretty pictures or with ‘gluten-free, small-batch, handmade,’ blah, blah, blah. Other than those nuggets, [they] are pretty similar in regard to production of the product.”

In 2019, Casamigos blanco ranked 10th on VinePair’s Best Celebrity Spirits list, with taste testers praising its approachable flavor profile, and bemoaning that it was not available during their college years.

The following year, and only a few months after its debut, Teremana came in at fifth place on the VinePair Celebrity Spirits roundup. Teremana’s blanco expression received high marks for its bold yet balanced combination of fruit and spice. Commended for its affordability, Teremana was also recommended as the go-to tequila for Margaritas.

For Lynnette Marrero, bar director at the Llama Inn in Brooklyn, both spirits show “good vanilla notes,” but have remarkably different flavor profiles. “Casamigos leans into mint and herbal notes, but Teremana leans into citrus, like lemon,” she says. As mentioned above, VinePair declared Teremana as the go-to tequila for Margaritas, but Casamigos’ profile also makes it well-suited for the classic cocktail. Both tequilas would shine in the many variations of the recipe, from spicy and skinny to smoky. Another favorite, the grapefruit-forward Paloma, would also aptly showcase each tequila’s distinctive characters.

Alex Doman, a former food and beverage strategy consultant, now the co-founder of AVEC, says: “Casamigos is an old favorite and a staple — nay, THE staple — of new-wave premium tequila. It really is difficult to imagine anyone knocking them off their perch as the go-to premium tequila to either serve at home or take as a present.”

Kelly Verardo, the brand bar manager at Osteria Morini, offers a dissenting opinion, describing Teremana as a better value that works great in cocktails, while Casamigos relies more on name recognition. “Most people are familiar with [Casamigos] at this point and it does have some sort of a cult following,” she says. “People know it [and] are comfortable with it, and ask for it, and don’t mind paying for it.”

The clash of the celebrity tequilas is far from over and Doman isn’t all in on either. A recent tasting of Teremana yielded surprisingly good results. “Apart from the fact that Dwayne doesn’t bring quite the same kudos as George, I think Teremana stands up very well as [a] quality, celebrity-backed brand and I fully expect it to go toe-to-toe as THE tequila to bring to a party in certain markets,” he says.

But even Doman had his doubts on whether The Rock could once again become the People’s Champ, asking, perhaps rhetorically, “How do you beat George Clooney?”