During his career as a bartender, New Orleans-based Shae Minnillo has fielded one question from countless guests: Will absinthe make me “trip”? To each of the inquiries, he invariably responds, “Not even close.”

It’s no surprise that Minnillo has found himself on the answering end of such questions. He previously worked at New York’s absinthe-focused Maison Premiere. Now, Minnillo tends bar at Manolito in the French Quarter of New Orleans, a city that has historically been a home away from home for the anise-flavored spirit.

Then there are the myriad myths that continue to taint the verdant, high-ABV distillate. That it’s illegal, for example, that it can only be made in Europe, or that it should be set alight prior to drinking are all false. “Just because something is overproof enough to be flammable does not mean that it will improve the flavor,” Minnillo says. “It will actually ruin the finer points.”

So how should drinkers approach and prepare the mythical “Green Fairy”? VinePair tapped Minnillo to glean his expert advice on all the aspects that matter, from buying absinthe to drinking it traditionally and mixing it in cocktails. 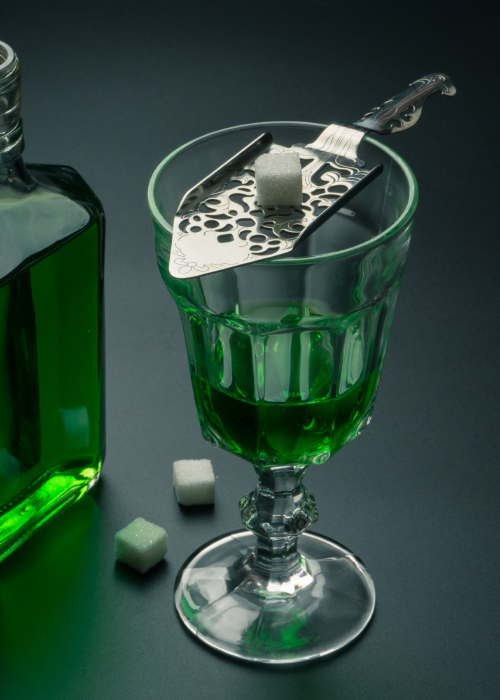 How to Buy Absinthe

For most drinkers, exploring the absinthe selection at a local liquor store — if such a collection of bottles exists — is likely to be harder than choosing between brands of gin, tequila, or bourbon. There aren’t anywhere near as many household names in the field, and many bottles that appear to be absinthe also bear other technical terms on their label, making things a little less straightforward.

Minnillo suggests first looking at a bottle’s proof to make sure you’re on the right track. Absinthe typically arrives between 50 and 72 percent ABV, he says. Lower than this, and you might be dealing with something else entirely.

Bottles that look like absinthe but contain the word “liqueur” may instead be pastis, Minnillo explains. “Pastis was invented to replace absinthe once it was banned, and contains sugar and no wormwood — a key element to true absinthe.”

As for regions, while many fine American-made absinthes are entering the market, Minnillo points to France and Switzerland as home to the category’s best producers. He also specifically recommends New Orleans native Ted Breaux’s line of Jade Absinthes, whose formulas are based on pre-ban Franco-Swiss bottlings.

“When in doubt, go to your trusted wine and liquor store and simply ask,” he adds. ”In small shops that carry absinthe, owners and staff are typically highly educated in all products they carry.”

How to Drink Absinthe Traditionally

We’ve all seen the slotted spoons and the sugar cubes, often erroneously burning. Many may have also come across antique absinthe “fountains,” and watched as the bright green liquid slowly turns to a cloudy, off-white color. What are these gadgets and how do they relate to drinking absinthe?

As Minnillo explains, the traditional method for preparing the spirit involves slowly dripping ice-cold water from a fountain into a glass of absinthe. The ritualistic preparation performs multiple functions: It dilutes the high-proof spirit, brings a pleasant chill to the final solution, and unlocks absinthe’s treasure chest of aromas and flavors. Doing so drop by drop allows easier control to stop at the perfect point of dilution — when the spirit transforms from clear to opaque, otherwise known as la louche. Meanwhile, the (optional) slotted spoon and sugar cube help balance bitter bottlings, which gain the profile from wormwood and other botanicals.

For home bartenders or bars that don’t sell a lot of the spirit, Minnillo says buying an absinthe fountain is an unnecessary expense. With their four spigots, traditional fountains only make sense when entertaining multiple guests. On the other hand, a single-serving “balancier,” which releases water in a slow, see-saw motion, offers just as much ritual and a cheaper price tag. Alternatively, you can skip the fancy tools altogether, chilling water in a pint or mixing glass, then slowly straining into a glass of the spirit, Minnillo says. (Admittedly, this method calls for a steady hand.)

Finally, there’s the Absinthe Frappé, a historic cocktail created during the late 19th century in the space now occupied by New Orleans’ Old Absinthe House. In this preparation, dilution arrives from shaking absinthe and a small amount of simple syrup over crushed ice, with the drink served like a boozy snow cone. “You can easily swap a simple sugar syrup with other flavors, such as orgeat, or liqueurs like Maraschino,” Minnillo says. “Just add a straw and you’ve got an excellent warm-weather sipper.” How to Use Absinthe in Cocktails

Of course, mixing with chilled water or serving as a complex, spiked slushy only scrapes the tip of the iceberg when considering absinthe’s many uses behind the bar. With its high alcohol content and potent flavor, the spirit offers a powerful, often-underutilized modifier, and appears in many classic cocktails.

Most approachable are those that call on smaller amounts of absinthe, commonly as a simple rinse in the glass, Minnillo says. Among them, the Corpse Reviver #2 shakes equal amounts of lemon juice, triple sec, blanc vermouth (or Lillet), and gin. For stirred, spirit-forward drinks, Minnillo points to the A La Louisiane, which was invented at the French Quarter restaurant of the same name in the late 1800s. A Sazerac and Vieux Carré hybrid, this cocktail calls for rye whiskey, sweet vermouth, Benedictine, and Peychaud’s bitters, and is also served in an absinthe-rinsed glass. “The classic recipe calls for equal parts but this drink reads better with a greater proportion of rye to the rest of the ingredients,” Minnillo says. “Follow your palate.”

As New Orleans’ official cocktail, the Sazerac itself also falls into the rinsed-glass category, and should be an important stop in any absinthe exploration. Meanwhile, for a more contemporary take, Minnillo’s bar Manolito offers the Menta Daiquiri, “which is blended to order with white rum, fresh lime juice, crème de menthe, a few dashes of absinthe, and fresh mint.”

But for absinthe to really shine, we need to explore preparations that go beyond a few drops in the glass.

Consider the classic Yellow Parrot, which fuses equal parts absinthe, yellow Chartreuse, and apricot liqueur. “Stir a bit longer than you would a typical stirred cocktail to make sure the absinthe is properly diluted,” Minnillo says. “The drink will become cloudy and opaque.” Alternatively, the Chrysanthemum builds upon a base of vermouth with a smaller amount of Benedictine, and anywhere from a few dashes to a bar spoon of absinthe.

With both drinks having first been published in the “Savoy Cocktail Book,” these cocktails keep things traditional, while offering additional outlets for the wildly underutilized, often-misunderstood ingredient.