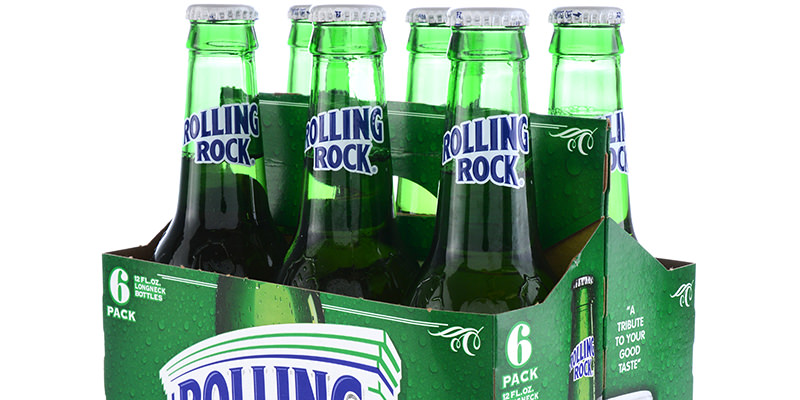 Rolling Rock is kind of legendary, though not necessarily for the quality of the beer. It’s just, ubiquitous, distinctive, kind of always been there. For many of us, or at least those of us with fairly relaxed parentage, it was the first beer we ever sipped, likely at some holiday dinner table, with half-tanked aunts and uncles chuckling as we made that “what the hell?” face.

So yeah, Rolling Rock may seem rote, kind of everywhere, green and familiar. But it’s got a bit of mystery, even some history to it. It was actually created as a kind of “local” beer, brewed in the Latrobe suburb of Pittsburgh, PA until 2006—when Anheuser Busch moved it to Jersey. And while the beer itself doesn’t have a ton of mystery—it’s an extra pale lager, two-dimensionally pleasant, good for casual drinking and icebox filler at a house party—the bottle does. The number “33,” printed on the back of every bottle of Rolling Rock, without apparent explanation.

Theories abound, maybe as a clever marketing ploy, or maybe because when you sit around drinking cases of Rolling Rock, you tend to wonder about this kind of stuff. One theory is that the Tito brothers bought the original Latrobe brewery site in 1933 (before Prohibition was repealed, clearly a gamble worth celebrating). According to the Rolling Rock site, one theory says there were 33 steps from the brewmaster’s office to the brewery floor (less exciting, unless you’re the guy who has to count those steps every day and you maybe want future posterity to recognize your quad strength?). There’s also a theory that, since Latrobe was founded in PA—where the Groundhog is like a rodent Jesus—of course they’d acknowledge it with a 33 (Groundhog Day is the 33rd day of the year).

The 33-ness of it all doesn’t stop there. 33 degrees is the temperature at which Rolling Rock is brewed, 33 is also the number of words in the quality “pledge” on the back of every Rolling Rock bottle. And yes, 33 is the number of letters in the ingredients in the Rolling Rock itself: water, malt, rice, hops, corn, brewer’s yeast. Then there’s the 33 springs theory—since “natural spring water is a key ingredient” in Rolling Rock production (which, another theory, apparently involves 33 steps)—and there are supposedly 33 springs that feed into the brewery’s reservoir. Of course you can never have a true mystery without horse lore: legend says one of the Tito brother’s bet $33 on horse #33 at the track and used his winnings to found the brewery. And lest we forget any (semi?) secret societies, there’s some idea that the “33” is a nod to the Masons.

Whatever the reason is—and we don’t know if it’s as compelling as Heinz’s 57—Rolling Rock’s done a good job turning numerical mystery from their history into their marketing future. In 2013, they hosted the inaugural “Project 33,” a gallery-based event that moved to L.A. in its next year and became a self-described “multi-week celebration of artistic self expression.” There’s some idea of being an independent spirit in there, too. But only if you drink Rolling Rock.