The Story Behind The The 50/50 Martini

This take on the classic Martini is possibly the simplest recipe to remember — equal parts vermouth and gin with an optional dash of bitters. Unsurprisingly, the 50/50’s origins somewhat align with the creation of the original Martini.

The first recipe is found in the 1888 edition of the “New and Improved Bartender’s Manual” by the acclaimed Harry Johnson, though it differs somewhat from modern iterations of the cocktail. It calls for “half a wine glass” of both Old Tom gin and vermouth, alongside a few dashes of gum syrup, bitters, and absinthe. It instructs bartends to stir, strain, and add a cherry or olive garnish. Before serving, a lemon peel should be squeezed on top. While it’s called a “Martini cocktail” in the book, the formula closer aligns with today’s 50/50 Martinis than standard versions of the cocktail.

It’s difficult to imagine garnishing a Martini with a neon Maraschino cherry now — evidence of the cocktail’s evolution over time. In the early 1900s, bartender Charles H. Mahoney mixed up a half-and-half cocktail of London Dry gin and vermouth, topping it with a slice of orange and donning it the J.P.C. cocktail. Similarly, the Mahoney Cocktail combines equal parts Nicholson’s gin and French vermouth, alongside a dash of orange bitters.

Others followed with similar combinations of gin, vermouth, and bitters, but early innovations largely avoided any association with the Martini name.

Fast forward to the early aughts, and the first honest-to-goodness named iteration of the 50/50 emerged at Audrey Saunders’ Pegu Club, around 2003. Since then, various iterations of the classic equal-parts cocktail have found their way into bars nationwide, with sherry, sake, and other lower-ABV liquids finding their way into the cocktail in place of vermouth.

Listen To Our Cocktail College The 50/50 Martini Podcast

· Our always updated list of the best Gin to buy right now! 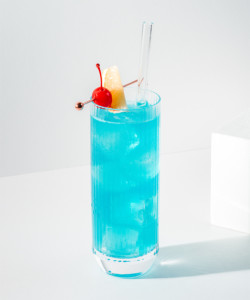 The Rosé Blackberry Spritz Recipe:
Try swapping in rosé aperitivo for your Aperol in this refreshing twist on a summery spritz. Get the recipe and learn how to make it here! 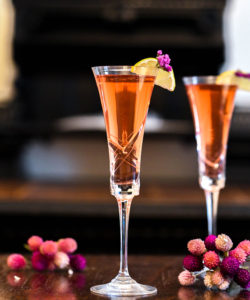 The Rosé 75 Recipe:
Sparkling rosé headlines this bubbly twist on the classic French 75 Champagne cocktail. Learn how to make it with this recipe! Orange Hot Chocolate Recipe:
Who doesn’t love a hot chocolate? It’s like a soft, warm hug for your palette. Make a big batch of this orange hot chocolate for your holiday party