One in five Americans are reportedly participating in Dry January, the new year kick-off fast from alcohol (a.k.a. “Drynuary”). If you’re feeling sober curious, have no fear: There are more options than tap water and ginger ale. Specifically, the number of non-alcoholic beer offerings is expanding.

The VinePair staff has been sipping non-alcoholic (NA) beers throughout the season, not because we’re abstaining from alcohol entirely, but because some make a great in-between drink during a day- or night-long session.

NA beers are a lot more popular in Europe than they are in the U.S. (especially Spain — more on that here), and although Americans may never catch up with that lifestyle, why not explore the new options? “Honestly not bad” is how one taster described this widely available non-alcoholic brew. Another agreed, not noticing a difference between this and the normal Heineken. Our panel concurred overall that Heineken 0.0 is indistinguishable from regular Heineken, and, poured from a can, it’s tasty and refreshing. “Smells like beer, with a sweet note to it,” said one panelist, “like Arizona iced tea.” Bread crust and a touch of caramel are also present on the nose. The beer is gem-clear, and a deep, reddish amber liquid is topped with a frothy cream-colored head. A beauty at first, it dissipated quickly, leading to a flat quality several minutes later. But if you drink it quickly – which is no danger, considering its barely-there ABV – it’s pleasantly bitter, with a shorter finish than a similarly flavored alcoholic brew would be. A “non-alcoholic near-beer stout” is a rarity, but BrewDog proves it shouldn’t be. Along with the requisite malt, water, hops, and yeast, this NA beer is made with chocolate wheat, oats, coffee, and lactose. “It’s super light but has a nice roastiness to it,” one panelist said. “It’s a little over-carbonated, almost like seltzer, but not in a bad way.” Clausthaler Dry-Hopped is, according to the brand, the world’s first non-alcoholic dry-hopped beer. It pours the murky dark orange of a watered down iced coffee or tea. Topped with a fluffy white head with active carbonation bubbles rising to the surface. Citrusy sweet aroma, like grapefruit syrup, or bitters. The body is medium-light, “fluffy but substantial enough to feel like beer and not taste watered down,” said one panelist. Its bitter finish is “a kiss of West Coast IPA,” said another. 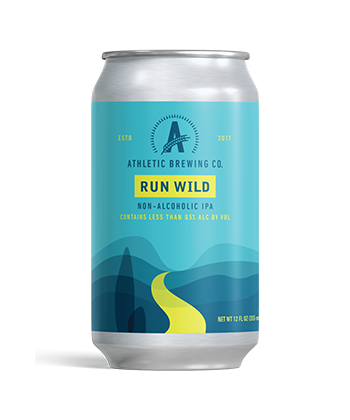 Hands-down the best non-alcoholic beer producer out there right now is Athletic Brewing of Stratford, Conn. Run Wild IPA emerges as a favorite among our panelists again (we’ve sung its praises previously). This IPA-inspired non-alcoholic brew is made with all-organic grains, five Northwestern U.S. hop varieties, and has the herbal bitterness and citrus flavor you want from an IPA, laid gently over a soft malt backbone. Another to look for from Athletic Brewing is Cerveza Athletica, a Mexican-lager-inspired label that’s crisp, refreshing, and perfect for in-between sipping.