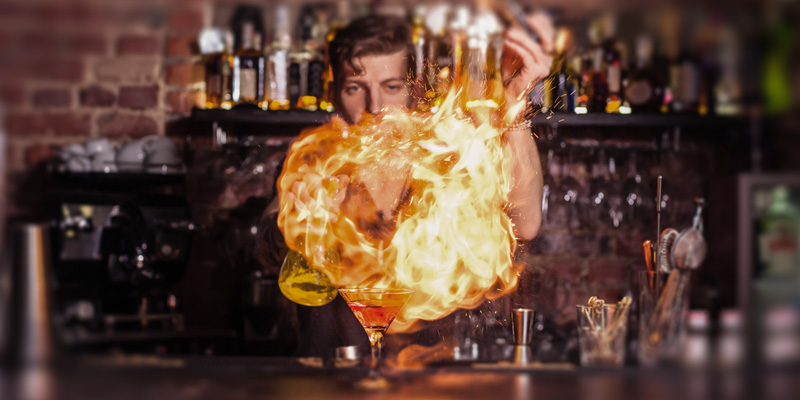 It’s Friday night and it’s time to get lit. You invite a core group of friends over, clean up your home cocktail bar, and brush up on the perfect libations for a classy pregame. This time, however, you want to take things to the next level.

Enter the “lit” part of the night. Nothing says next level like setting something on fire before drinking it.

First off, safety first. We’re talking fire, after all. Second, you have to pick your alcohol wisely. Yes, alcohol is flammable, but you’re not drinking straight alcohol (well, you shouldn’t be drinking straight alcohol). You’re drinking a beverage that has definitely been distilled, possibly been oaked, and likely has added flavors. You’re probably already aware of this if you’ve messed around with beer and fire, but a drink has to be a certain strength if you want that drink to be truly lit.

Lit alcohol goes way back. In the 1700s and 1800s, the Dallas Observer writes, there were stories of tavern owners lighting samples of whiskey that dealers brought in. If the whiskey caught fire, it was proof that it wasn’t watered down — meaning cask strength, or between 50 and 60 percent alcohol by volume.

Things are a little more scientific these days. We now know that it’s the alcohol vapor that catches fire, not the liquid, just like with gasoline. More vapor comes off the alcohol as the alcohol heats up, making it easier for it to light. Colder alcohol means less vapor, which means less chance for flames.

The vapor also impacts what you can use as a lighter. A match elicits less vapor from the alcohol than a torch, which is much hotter.

So how low can you go (in alcohol by volume) before the floater of alcohol on that would-be burning cocktail turns into a failed party trick? Here’s the guide, from top to bottom.

Sells at either 75.5 percent alcohol by volume, or 95 percent (although the latter is illegal in some states). Everclear will maintain a consistent and difficult-to-put-out flame.

It’s right there in the name: 151-proof, or 75.5 percent alcohol by volume. Once again, consistent flame to be expected.

Absinthe can range from 45 to 74 percent alcohol by volume. It’ll catch on fire, but you don’t really want to ruin the taste of a good absinthe, right? Will light and maintain a flame, but it will go out easier.

Throw it back to history for this one. Cask strength whiskey will quickly light on fire and sustain a decent burn without being impossible to put out. The more common stuff, which averages around 40 percent alcohol by volume, will burn a small blue flame over the top of the drink that goes out with a light breath — same for vodka, tequila and gin.

Don’t bother trying to light a floater of any alcohol under 40 percent alcohol by volume. You can get a little action in the 30-percent range, but it’s not worth the trouble.