There are many factors that make bourbon special, from the no-holds-barred list of rules that govern it to its uniquely balanced corn and rye mash bill. But since Congress declared it America’s native spirit in 1964, much of bourbon’s history remains steeped in the Bluegrass State, which might explain why so many drinkers mistakenly believe that the rich, sweet, and sometimes spicy spirit can only be made in Kentucky.

Bourbon has taken nuances from cities across the country — from Wyoming to Pennsylvania — developing flavor profiles that are as personal as the locations in which they are distilled. It’s this personal feeling that has helped bourbon to become one of the most popular spirits among drinkers today.

Whether you’re a novice or a seasoned drinker, there are a few standard Kentucky brands that are synonymous with bourbon. In order to explore the full range of tastes this distinctly American spirit has to offer, we turned to the experts who pour, mix, and handle it every day.

From New York’s Finger Lakes to Waco, Texas, we asked 6 bartenders to share their favorite bourbons from beyond Kentucky.

Best Bourbons Not From Kentucky I’m a big fan of Woodinville Whiskey from Washington, and really enjoy their Straight Bourbon Whiskey. The bourbon is aged for five years and has notes of crème brûlée and vanilla bean that work well in a classic Old Fashioned cocktail. The company got its start with guidance from the legendary master distiller Dave Pickerell, and this bourbon is a true grain-to-glass whiskey that speaks to the land. It makes use of ingredients that are sourced from Quincy, Wash., as well as water from the Cascade Mountains, which is one of the major mountain ranges in western North America. —Federico Doldi, beverage director at the Gansevoort Hotel, NYC 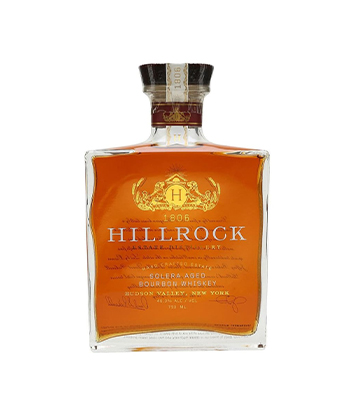 I’d have to go with Hillrock Estate Solera Aged Bourbon. It’s finished in 20-year-old oloroso Sherry casks and is absolutely delicious! What makes this bourbon so special is that it is the first American whiskey aged in the solera method, which is traditionally used to age Cognacs, ports, and sherries. No barrel is completely emptied, allowing the bourbon to form a nice richness. This one has warm notes of fig, walnuts, and toffee which makes it delicious to sip on its own and it also makes a fantastic Old Fashioned. —Paula Lukas, beverage consultant and bartender, NYC I love Few Spirits Straight Bourbon out of Evanston, Ill., a town that historically maintained strict regulations on the production and sale of alcoholic beverages decades after Prohibition. Using a high-rye mash bill, a local varietal of malted barley, and Saison yeast strains, this bourbon is very non-traditional compared to what is coming out of Kentucky. It is much lighter in body and loaded with soft fruit notes like dark cherry, as well as gingery spices and all the satisfying banana and caramel notes one would expect from a great bourbon. The initial thought is that the lighter body of Few’s bourbon would get crushed with the addition of ice or in an Old Fashioned, but the subtle notes have a way of shining through. —Kyle Tran, corporate beverage director, Apicii, Tellers & The Great Hall, First National Center, Oklahoma City One of my favorite bourbons not from Kentucky is the McKenzie Bottled in Bond wheated bourbon. Made in the Finger Lakes near where I grew up, it uses a similar mash bill as some of the other big wheated bourbon players. But what lets it stand apart is that the producer uses a different strain of winter wheat for a bolder flavor. For under $50, this would be my ideal sipping whiskey from outside of Kentucky. —Benjamin Brown, bartender, Porchlight, NYC The best bourbon not from Kentucky is Balcones Blue Corn Bourbon from Waco, Texas. The mash bill is made from 100 percent blue corn that is native to the state, and although it is bottled at 63.5 percent ABV, it makes for a drink that is powerful yet not overwhelming thanks to an extraordinary richness that is balanced by vegetal notes. It’s a molasses-forward bourbon that reminds me of blue corn masa. —Gianna Johns, m​​ixologist, Fairmont Miramar Hotel & Bungalows, Santa Monica, Calif.