After exploring the emergence of double IPAs with some of the brewing world’s premier names in hoppy beer, it’s only right that we take it to the next level: the proliferating triple IPA.

While the Brewers Association doesn’t recognize triple IPA as an official beer style, the most widely accepted determinant is alcohol by volume, or ABV. Typically, these brazen brews are upwards of 10 percent ABV. They feature greater amounts of malts and hops than double IPAs — designed to deliver heightened flavors and aromas compared to their antecedent.

Triple IPAs can be bitter and piney, or soft and tropical. Some come sour, some laced (or laden) with lactose. Yet ask any brewer what makes a great one, and they’ll likely say that paramount to any characteristic is drinkability — in other words, achieving balance in the face of amplified flavors and alcohol.

That aspect is evident in the most popular expression of the style, Russian River’s Pliny the Younger. Since its draft-only debut in 2005, Younger (as well as its almost-as-sought-after sibling, the Pliny the Elder double IPA) has primarily stayed near, and sometimes at, the summit of BeerAdvocate’s top 250 beers — a remarkable feat considering today’s dizzying array of options and capitalism’s unquenchable thirst for new. The beer’s annual release attracts fans from all over the world to Russian River’s Santa Rosa and Windsor, Calif., breweries, generating millions of dollars in revenue for Sonoma County. (Due to the pandemic, this year’s release was held entirely online.)

To help VinePair readers find the best triple IPAs, we spoke to 12 brewers from around the country, including those who produce what are considered to be elite examples of the unofficial style — and all of whom are undeniably ardent lovers of all things lupulin. Here’s what the experts picked as their favorites. “A few years ago, I had the opportunity to experience my good friend Sam Calagione’s legendary hospitality at Dogfish Head’s original brewpub in Rehoboth Beach, Del. We tasted some of his pilot batches at the brewpub and ended up touring the production facility afterwards, and that’s where I picked up a few bottles of Dogfish Head’s 120 Minute IPA. This beer really stretched my idea of an IPA. It’s big and boozy — varying each year between 15 and 20 percent ABV — and the aroma smacks you in the face with layers of citrus, pine, and malt sweetness. The mouthfeel of 120 is just incredible; it’s like hop candy for lupulin lovers. It has rich flavors of toasted grain and the overall impression fluctuates between tangy fruit and dank earthiness. It all comes together with a huge lingering finish, thanks to the alcoholic heft of the brew, and the sensations dance for many minutes on the palate. So much hoppy goodness in one bottle!” — Sean Lawson, Founder and CEO, Lawson’s Finest Liquids, Waitsfield, Vt. “The triple IPA is a tricky style to nail: Retaining huge hop character, juiciness, and minimizing boozy sweetness is difficult any time you’re talking 10 percent ABV or higher. I’ve had more than my share of overly sugary-sweet TIPAs. One of the hallmarks of our hazy double IPAs is that they finish bone-dry, and I’m proud to say we managed to retain that trait with our first-ever hazy triple, Haymaker, which we brewed back in November in honor of our fifth anniversary. More recently, I’ve been impressed by the small but growing number of breweries that have begun perfecting the hazy triple style, and right now my pick for favorite is Swim Test by Green Cheek out of California. Double-dry-hopped with Citra and complemented by Nelson [Sauvin hops], this is a flavor bomb of the highest order. And beyond sneaky at 10.2 percent, this beer will disappear from your glass before you realize what’s happened. The appearance is a bright, beautiful, almost milky yellow — very similar to the color we strive for in our hazy beers — and the rolled oats and unmalted wheat form a soft yet sturdy body that is creamy and juicy without feeling cloying. Swim Test is an outrageously delicious triple, though massively flavorful beers are par for the course for Green Cheek based on the few I’ve been fortunate enough to try.” — Brody Chapman, Owner, SpindleTap Brewery, Houston Scarcity IIIPA by Altamont Beer Works is one of my favorite triple IPAs. Altamont brews it every year for SF Beer Week so you’ll only see it around from February until maybe early April. It’s always a crowd favorite every year at SF Beer Week Opening Gala and at the Bistro’s Double IPA Fest. Triple IPAs aren’t usually described as ‘balanced’ because of the high ABV and high kettle/dry-hopping rates, so I will describe it as smooth. It uses a lot of Citra hops, giving fruity/citrus aromas with a slight floral note from the Centennial; and finishes slightly dry with a touch of warming alcohol, with it being 11 percent ABV. Not overly boozy or cloying like some triple IPAs can be. Steve [Sartori, owner of Altamont] and his crew do a great job with hop-forward beers.” — Dean Roberts, Brewmaster, Knee Deep Brewing Company, Auburn, Calif. 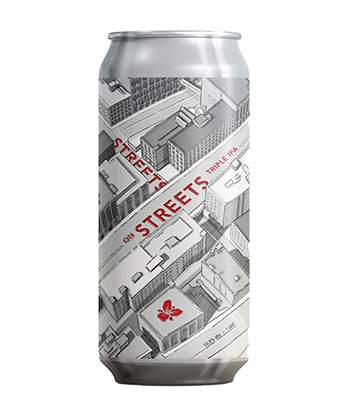 Everything Trillium puts out is high quality, and The Streets is no exception. It’s a well-balanced triple IPA with a citrus nose and taste that can cause a temporary tropical-island fantasy.” — David Smith, Co-owner, West LA Beer Company, Swanzey, N.H. 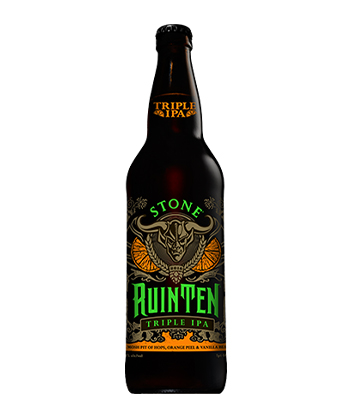 “Back in the day, it was simple: We homebrewed and enjoyed West Coast IPAs and didn’t fuss too much. Then, shortly after opening our brewery, hazy IPAs became all the rage and that’s all we made, tasted, and drank! Having palate fatigue, we picked up a bomber of Stone’s RuinTen Triple IPA and it was a rendezvous down memory lane with a classic, pleasantly malty hop bomb from the team that got us into brewing. Pine and citrus aromas flooded the air the moment we cracked it open. The first sip brought that old-school resiny bitterness that almost feels like it sticks to your teeth. It finished dank and citrusy and left you wanting another. After the fourth or fifth time buying RuinTen, it disappeared from store shelves and became no more than an exciting memory. Bring that sh*t back, Stone, we want more!” — Justen Foust, Owner and Brewer, Electric Brewing Company, Murrieta, Calif. This question takes me back to 2016. I remember it well, because this was the year we started brewing at Great Notion. I was at the Hop & Vine in Portland, Ore., and the beer was Notorious from Boneyard Brewing. This is a fantastic example of the style: resinous and dank, and also very fruit forward, like candied fruit. The balance is just about perfect. What surprised me most was the drinkability: Notorious is 11.5 percent ABV but so easy to drink. How is that even possible?! Better ask Tony Lawrence [brewmaster and co-owner, Boneyard Beer]. Even better, just drink this beer.” — James Dugan, Co-founder, Great Notion Brewing, Portland, Ore. “Power Plant from El Segundo is probably one of the most balanced triple IPAs I have ever tasted, and I always look forward to its February release. The aroma is a fruit cocktail with a balance of Mosaic, Simcoe, Citra, and Amarillo hops. The thing that struck me about this beer is it finishes so dry, at 1.5 Plato. It‘s fermented with a healthy dose of California Ale yeast and gives off clean alcohol aromas without any off-characteristics typical in high-ABV beers. El Segundo has managed to create a well-balanced beer despite being 11 percent ABV.” — Peter Mumford, Owner and Brewmaster, Mumford Brewing, Los Angeles “All Green Everything is not only one of my favorite triple IPAs, but one of my favorite beers, because it reminds us where we are in beer today and how we got here. It represents our experience, growth, and maturity as craft breweries and beer drinkers over the last six or seven years. I remember when, in the early days of Other Half, All Green Everything came in a printed can and the beer itself was bright and a little boozy. Since then, this beer, and its packaging, have transformed with shifting trends and drinkers’ interests. The printed can became stickered and the triple with more West Coast attributes became what people are going crazy over: a hazy, juicy, fruit salad in liquid form. Beyond the liquid, I think All Green represents how successful breweries and innovative beers lead the industry, and makes me wonder how beer will continue to transform in the years to come.” — Eric Ruta, Owner, Magnify Brewing Company, Fairfield, N.J. Foam Brewer’s Pop Crimes is my pick. Even though it’s 10 percent ABV, the IPA is balanced and it’s easy to overlook the alcohol strength. The notes of orange, papaya, and grapefruit perfectly round out the boozy bite that sometimes accompanies hoppy beers that are north of 9 percent. A friend of mine once compared it to a strong Mimosa but better, and I couldn’t agree more. I’m lucky enough to live very close to Foam and try to visit as much as possible, and when Pop Crimes is available you can be sure I’ll be leaving with at least a couple 4-packs under my arm!” — Jack Droppa, Owner and Brewer, Weird Window Brewing, South Burlington, Vt. “The brewery that got me into triples was Other Half, and its Triple Broccoli was the one that stood out. The first time I had it was after a long homebrewing session. A friend brought it over and I remember how big and flavorful it was, but yet smooth, balanced, and dangerously drinkable. Usually with triples my palate gets fatigued and I want to reach for something lighter. But not with Triple Broccoli. This is a beer I could drink all the time.” — Steve Parker, Co-owner and Brewer, Fidens Brewing Company, Colonie, N.Y. 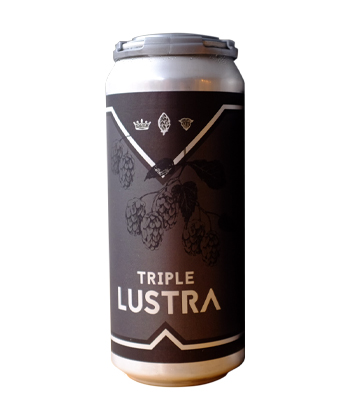 “Triple Lustra from Dancing Gnome begs the question, ‘What’s more than more?’ Well, it’s a triple IPA. The most, mostest hops ever hopped, and the best part is, you can taste every bit of it. With all that Amarillo and Citra crammed into these cans, it’s like a mango-papaya gelato with fresh pineapple slices. Lustra in its various incarnations are bomb*ss bombshells, starting with the small crusher Half-Lustra, but Triple Lustra, just call in sick now because you’re gonna need a day off just to process the experience. It’s hard to describe the experience other than just ‘wow.’ So what is it? It’s the most of everything: all the malt, all the hops, all the everything. Words don’t really capture it, so you’ll just have to try it.” — Brandon Capps, Founder and Head Brewer, New Image Brewing, Arvada, Colo. I don’t drink a lot of triple IPAs, so that’s why when I had Grimm’s Suicide Door it really stuck with me. Soft, pillowy mouthfeel that hides the 10 percent ABV very well. A lot of stone fruit and tropical aromas which are some of my favorites in a New England-style IPA. Haze was very stable even after some time in the can and the color was reminiscent of orange juice. Being a fan of Lambo Door, its smaller version, Suicide Door hit all the marks. It’s clear to me that the crew over at Grimm will continue to produce some really solid hoppy offerings.” — Jeremy Watts, Brewer, Source Brewing, Colts Neck, N.J.