Despite the fact that vodka is (perhaps unfairly) viewed as lacking in personality, it is currently the top-selling spirit in the U.S. by volume. Leading the pack is Tito’s Handmade Vodka, a brand that, in 2019, knocked reigning champ Smirnoff out of its decade-long grip of first place.

Smirnoff, owned today by the mega-company Diageo, is no shrinking violet. According to The Spirits Business, the brand is the biggest seller of vodka in the world, by a decent margin, selling over 25 million cases worldwide in 2019, more than double the amount sold by Absolut (second in the world).

While vodka might be consigned to the nether regions of your bar, it’s certainly not going away any time soon. Keep reading to learn more about how these two pioneering vodka brands compare.

In the mid-1990s, Texas native Bert “Tito” Beveridge, found himself on a circuitous career track after stints in the gas and oil industry and the mortgage business didn’t pan out. Looking to his hobby of infusing vodkas as a possible path forward, he set out to make a superior product that would outshine the competition.

After Beveridge secured Texas’s first legal distilling permit in 1995 and built his own production still, Tito’s Handmade Vodka became a reality. While the path to success was far from easy, in 2001, Tito’s fortune changed when it was awarded a Double Gold medal at the San Francisco World Spirits Competition. By 2017, a little more than 20 years after he started Tito’s, Beveridge was added to the Forbes 400 list of America’s richest people. 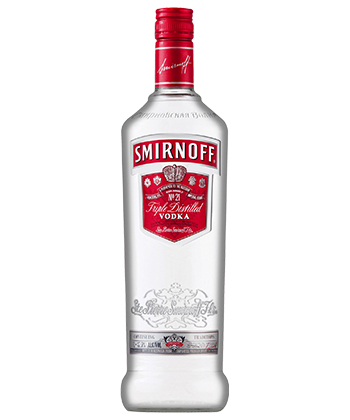 Smirnoff, also a true rags-to-riches story, was founded in 1864 by Pyotr Smirnov, a former indentured servant, who established the Moscow-based distillery. After a steady supply of Smirnov’s “Table Wine No. 21” (known today as Smirnoff Recipe No. 21), was stocked at the Russian imperial residence, his product became the leading vodka in the country.

Following the Russian Revolution in 1917, Smirnov’s son Vladimir, the head of the company, was forced to flee Moscow. He resumed the family business in France, where he changed the brand’s name to “Smirnoff.” In 1933, Smirnoff began production in the U.S. and was introduced into the market a year later, quickly becoming an international sensation.

Tito’s is made with corn, distilled six times, and clocks in at 80 proof. And while most vodkas are distilled using column stills, Tito’s claims it is “handmade” and uses old-fashioned pot stills to make its vodka, a process that is less efficient, more labor-intensive, and typically reserved for rum or whiskey production. These assertions have been widely disputed, and today, some critics believe that the company uses column stills or a combination of the two.

In addition to offering 90 and 100 proof vodkas, Smirnoff’s flagship No. 21 is bottled at 80 proof. The product is triple-distilled and charcoal-filtered, a method popularized by Smirnov to help rid the spirit of impurities.

VinePair’s review of Tito’s found brined canned corn flavors with salty, sweet, and butter notes. Smirnoff No. 21 was touted for its easily recognizable bottle and its adaptability in a large cadre of cocktails, and, in a VinePair blind tasting, was the favorite when matched against Tito’s. VinePair declared Tito’s as the perfect base in an extra dirty Martini. Sharon Yeung, bartender at Half Step in Austin, Texas and co-creator of Daijoubu, showcases the vodka’s versatility in her creation, the Shiso Rona, a twist on the classic sour that calls for Tito’s, lemon and lime juices, pink peppercorn syrup, and cucumber bitters.

According to Smirnoff, its vodka was the original spirit used in the debut of the Moscow Mule, a combination of vodka, ginger beer, and a touch of lime. The iconic cocktail was purportedly the result of a collaboration between the company and a California-based bar owner in 1941.

When asked which vodka brand overall offers the best value, Brandi Carter, the beverage director at Elvie’s in Jackson, Miss., told VinePair that Tito’s come out on top, calling it a “great quality vodka for sipping, mixing, and infusions.”

For Shane O’Neill, the lead bartender at Quality Eats in New York, Tito’s remains the brand to beat. “Tito’s has such a stronghold on the vodka market right now,” he says. “I’d say about 90 percent of the vodka drinks I make these days are with Tito’s.”

But O’Neill still gives Smirnoff credit. “They are constantly rolling out a bunch of new flavored vodkas,” he says. “And I have seen people using them a ton on social media (Instagram and TikTok.) Those [products] are great for people throwing backyard parties and such. But for the people ordering vodka at bars and restaurants, they’re ordering Tito’s.”