Cocktail histories are elusive, but most people credit Alberta, a western Canadian province, with the creation of several intriguing drinks. It’s the rumored home of the Caesar, Canada’s answer to the Bloody Mary (just add Clamato, eh?). As legend has it, it’s also the birthplace of the Shaft, a Canadian classic named for an American film legend.

At its core, the Shaft cocktail consists of four ingredients: vodka, Kahlua, ice, and espresso or cold brew, like a Black Russian with an extra shot of caffeine. Many renditions add milk, cream, or Irish cream, like a White Russian. Some even add bourbon. But the espresso is key.

“It’s the original pre-game or mid-party pick-up,” says Leigh-Anne Norris, who grew up in Alberta and had her first Shaft at Calgary’s Living Room. “It’s tastier and classier than a Red Bull vodka.” 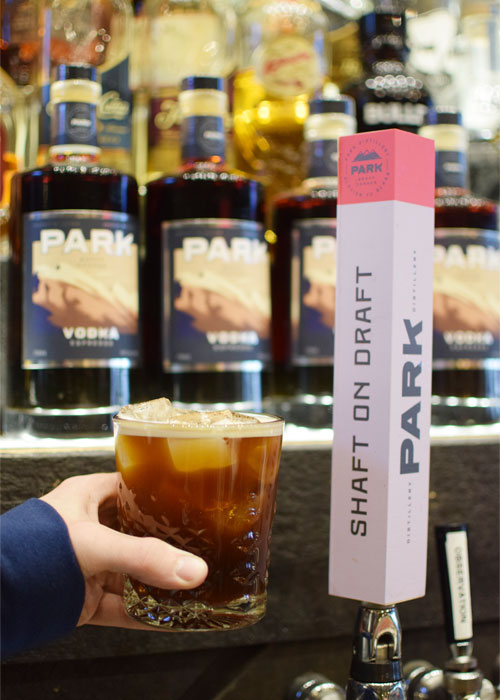 Staff of The Living Room claim their former bartender, Mark Smith, invented the Shaft. This is up for debate, however. British Columbians claim it came from Victoria, B.C., because it’s so ubiquitous there — in fact, there are Shaft-making competitions in Victoria.

Park Distillery, a gastro-distillery in Banff, Alberta, uses unsweetened espresso vodka and adds local honey. Some bars in the area proudly offer “Shaft on draft,” or pre-batched and drafted Shafts, to keep up with the demand. At High Rollers in Banff, Shaft on draft is ordered so often that it actually outsells beer.

No matter which version you drink, the intent of the cocktail is the caffeine, adding a kick to your evening. In winter, it’s a popular après-ski item for those coming off of Alberta’s three big ski resorts. On summer bar crawls, it’s perfect before — or during — a night out.

Traditionally, it’s meant to be toasted with your friends and then poured down your throat in one fell swoop, like a shot. Of course, you can also just sip the cocktail — that’s what Shaft competition judges in Victoria do. But if you really want to honor Canadian tradition, you might as well go ahead and chug. Can you dig it? Shaft recipes vary, so feel free to customize this rubric. You can serve your Shaft as a shot, with a straw, or as a long drink over ice.