1792 is a premium bourbon owned by the Sazerac Company, a global beverage alcohol giant that took over the brand and its distillery in 2009. Formerly known as Ridgewood Reserve, the 1792 brand is produced at Barton 1792 Distillery in Bardstown, Ky.

Although the distillery was established in 1879, founder Thomas S. Moore aimed to honor a special event in bourbon history when he named the distillery after something that happened nearly a century before.

1792 is named for an important year in bourbon.

June 15, 1792 is a really important date in Kentucky history. No, seriously: It was the first day Kentucky was legally recognized as a state. In fact, Kentucky is widely acknowledged as the birthplace of bourbon. Although not a legal requirement, Kentucky remains the unofficial home of “America’s spirit” to this day.

Its statehood didn’t stay Kentucky’s claim to fame for long: The region began a renaissance in producing high-end premium bourbon. In the 1780s, a distinct style of corn-based whiskey was distilled in the Bluegrass State. Whiskey’s popularity skyrocketed after the American Revolution, once the production of rum began to dwindle.

It helped set the scene for the “Bourbon Capital of the World.”

Barton 1792 Distillery was established in 1879, which makes it the oldest fully operating distillery in Bardstown. Boasting a 196-acre facility, the distillery houses 29 barrel-aging warehouses, and a still house.

Here’s the tale of the tape.

OK, it’s time to talk about this lineup. First is a limited expression of 1792’s Sweet Wheat Bourbon that is produced using soft wheat. Sure, we have to mention the Aged Twelve Years Bourbon. This spirit is a recent recipient of the Silver Medal at the 2021 San Francisco World Spirits Competition. Now, I can’t go on without highlighting the Port Finish — the whiskey in this bottling was briefly aged in a barrel that once held port wine. This combo oozes a rich aroma of apple and vanilla. But, sometimes…

1792 Small Batch is the brand’s signature bourbon, bottled at 93.7 proof. In a 2020 review, VinePair staff writer Tim McKirdy describes the small batch as having “lively, baked blueberry flavors and a seasoning of black pepper.” Further, VinePair featured 1792 Small Batch as one of the Best Bourbon Whiskeys Under $50. VinePair also named 1792 Sweet Wheat bourbon as a worthy alternative to the famous Pappy Van Winkle whiskey. And this label is also a recent recipient of the Double Gold Medal at the 2021 San Francisco World Spirits Competition.

The distillery also produces arguably one of the worst bourbons.

Have you heard of the Military Special? It’s OK if you haven’t — it’s one that has been produced at Barton 1792 Distillery since 2013, but is only available to the U.S. military, and is reportedly not very good.

1792 is accident prone, or possibly cursed.

1792 has suffered a lot of weird accidents. In March 2019, the distillery lost 120,000 gallons of would-be bourbon after an equipment failure. The accident came after one of the legs of a 55,000-gallon beer well spilled over. Two employees were taken to Flaget Memorial Hospital to be treated for non-life-threatening injuries. And this wasn’t the distillery’s first rodeo…

In June 2018, the distillery suffered another freak accident, this time, involving hundreds of dead fish. A partial warehouse collapse caused a large-scale alcohol leak that spilled into  Withrow Creek in Bardstown. The leak sparked water contamination leading to the death of hundreds of fish.

What caused the collapse still remains a mystery.

On the bright side, it pairs well with cheese.

Cheese pro Steve Marko, senior director of R&D of Tillamook, says he leans on 1792’s Sweet Wheat to pair with light cheeses. Marko believes that the vanilla from the oak aging intensifies the flavor of the cheese. “These styles tend to not overpower the cheese, rather complement it,” he says.

1792 has a section on its website titled 1792 Style, a blog that pairs the brand with lifestyle outlets. The blog features articles for those interested in accessories to pair with their bourbon. There is a style guide for those looking to pair a cigar with your 1792. Of course, there are myriad food recipes. Finally, there is a section dedicated to fashion: For example, “Upgrade Cocktail Hour With Killer Kicks” is an article suggesting what type of footwear to rock on a Saturday night.

Another (bottle) edition of ‘The Price is Right’…

1792 knows money is the great equalizer, and often price can make or break the purchase of a spirit. Well, in the case of 1792, you can expect a fair price range: On average, 1792’s Small Batch Bourbon in a 750-milliliter bottle will cost around $30 in most states, according to Wine Searcher. It is a value buy compared to other premium bourbons that average above $50. 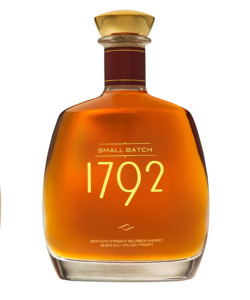 1792 Small Batch:
This bourbon is produced at the historic Barton 1792 distillery, in Bardstown, Ky. Though it is the entry-level expression in the 1792 ... 1792 Single Barrel Bourbon:
Made at Buffalo Trace's Barton 1792 Distillery, this single-barrel bourbon tells a dual tale of power and grace. Its aromas are bold and ... 1792 Small Batch:
While the exact mash bill of this bottling is not disclosed by the distillery, it's marketed as a “high rye” bourbon. That spice is ...