The tao of malt liquor — its history, its symbolism, its cultural currency — is a story and a lesson unto itself. It is a story that I am completely unprepared, unable, and unwilling to write. What I can do, though, is go down to the gas station and (inexplicably from the cashier’s perspective, I’m sure) pick up 11 different brands, enlist my wife to administer a blind taste test, and explain the results to you, the itinerant Google searcher or curious underage drinker. For the latter group, at least, allow me to make this much clear: these drinks are, without exception, and in the most emphatic sense, gross, bad, nasty, foul, cheap, unpleasant, avoidable, unfortunate, unnecessary, disappointing, depressing, cheap (again), and inadvisable. Do not, under any circumstances, purchase or consume these products. You will not enjoy them. That is my promise to you.

I didn’t enjoy them, either. But I want to be clear about something. These tasting notes are not penned by a craft beer snob, and the samples are not being compared to Pliny The Elder or Ommegang’s latest or whatever beer you think is really great. They’re also not being evaluated as part of the greater malt liquor spectrum, i.e., against other similar drinks only. I just drank ‘em and put ‘em in the order I wanted. It is a subjective gauntlet, but a gauntlet nevertheless.

With the preamble out of the way, here are the ground rules. Each product has been blindly sampled and tested for appearance, bouquet, mouthfeel, and flavor. A subjective, average cumulative score on a scale of 1-10 was then assigned to each beverage, with a score of 1 representing a product that could reasonably be consumed for a purpose other than pure, degenerate inebriation, and a score of 10 representing a product that would be better left inside whichever nasty little gremlin excreted it into the bottle in the first place. The score units are irrelevant, just like the purchase price, availability, label art, and basically everything else that isn’t how the stuff tasted. Any questions? Besides “why?”

[N.B. Yes, there are some famous faces missing from this motley crew. As you will soon learn, Olde English and St. Ides are just two examples of notable nasties that were not included in our sample. There is no particular justification for this other than the ethical principle of minimizing harm to a subject, i.e., me, i.e., the guy who has to drink all this shit. Sorry, but I put in my fair share here. You go drink it if you love ‘em so much.]

Here is the definitive ranking of malt beers from worst to best based on taste alone. Appearance: Discount maple syrup
Bouquet: Plain wax
Mouthfeel: Absent
Taste: Flavor is lacking, which is a godsend, as this thin brown gutter runoff imparts the strong, bitter aftertaste of an especially memorable vomit. This particular Busch Signature vintage was tested midway through the battery, and was so ghastly that it necessitated the upward adjustment of the five previous entries. Testing BSCL in this fashion was like letting a flyweight boxer punch you in the face five times, then bringing in a silverback gorilla to rip your spine out through your ass. 10.5 snarls out of 10. Appearance: Relatively beer-like
Bouquet: None, ominously
Mouthfeel: Like a monster crawling out of my head
Taste: Among its peers, a decent but quick-deteriorating head, with a nice yellow straw color. Sampled directly after the Busch Signature, and while it is certainly a step in the right direction, it’s kind of like I improved my circle of hell. I’m still in hell, you know? Anyway, my mouth wants to spit it out before I even realize what I’m doing; my body is reacting innately, like when you touch a hot surface. I can feel my nose physically turning up at it as well. If the brewer’s goal was to reproduce the experience of sucking on a chain link fence, he succeeded. 8.5 Rusty Rods out of 10 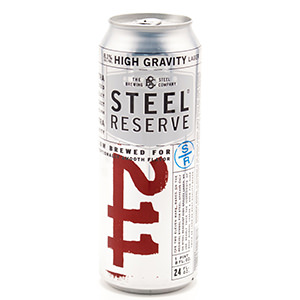 Appearance: Fluorescent yellow, like nuclear waste
Bouquet: Like a hospital: sterile, unwelcoming, hints of death
Mouthfeel: Grimy pool water
Taste: I was prepared to be seduced by King Cobra somewhat, since it was the only sample actually tested in the classic 40-ounce format. Instead, all that meant was that I had more of it to pour down the drain. A truly abysmal liquid that I would be pleased to never have inside my mouth again. 5.8 Sweaty Feet out of 10 Appearance: A daunting, light pink hue, like watered-down Kool-Aid
Bouquet: Generic Worcestershire sauce, but like, kind of good
Mouthfeel: Technically fluid
Taste: For what is essentially carbonated tomato stew, it could be worse. I don’t understand who this is for, though. Would be better hot, which is a weird thing to say about a beer. It’s also super, super thin, like they’re cutting it with water to get more out of it, or they read the instructions on the back of the box wrong. That’s pretty remarkable, really. Sad, but remarkable. 5.2 Bubbly Tomatoes out of 10 Appearance: A greasy, gasoline yellow
Bouquet: Inert
Mouthfeel: Distressingly flat
Taste: Extremely processed and unnatural. Like something a friend would make you drink as a joke. If you read some regular folks’ reviews, it’s clear that many people believe this is supposed to, or even does, taste like the hurricane mixed drink with all manner of fruit juice and sugar. That is worrisome to me for a number of reasons, but suffice it to say that this was just a regular old cruddy beer, and not a regular old cruddy beer with pink syrup in it. 4 Prank Bros out of 10 Appearance: A Trumpian gold
Bouquet: Maximum corn
Mouthfeel: ????
Taste: Very ordinary; a predictably fine malt liquor. Bitter, metallic, adjunct-y and cheap. But it doesn’t quite feel like a punishment to drink it. Which is good, because it feels like a punishment to buy the shit. 3.4 Reality TV Stars out of 10 Appearance: A light bulb being fed too much electricity, glowing yellow
Bouquet: Gross cereal
Mouthfeel: Not very terrific
Taste: Very close to tasting like a regular beer, but the alcohol pinch is so noticeable that there’s really no wondering if this is supposed to be good or just get you sideways (it’s definitely the sideways one). 3 Landos out of 10 Appearance: Flaxen to the point of translucence
Bouquet: Clean malt
Mouthfeel: Pleasantly bubbly
Taste: Imagine the worst Euro-style lager you’ve ever had; like a Heineken brewed in a toilet or a backwashed Stella Artois. This is 3 percent better than that. Alright, maybe 2 percent. Worse. 2.4 Courtesy Flushes out of 10 Appearance: Amber-ish in the right light
Bouquet: Like a crummy gazpacho
Mouthfeel: Rich, thick, almost luxurious coating left behind on the tongue.
Taste: I was floored by this result. Not that Sample #5 was one of the two cheladas, of course — this stuff doesn’t look like regular beer — but rather at just how decent a cheap tallboy version could actually be. That’s not to say I’ll ever order a Modelo Chelada at a bar, or drink one voluntarily ever again, because who needs vegetables in their beer, honestly? But if I wanted a massive can of cheap hooch that tastes like someone dumped a CO2 cartridge into a jar of Prego, well, this would be the one I’d reach for. 2.125 Fetid SpaghettiOs out of 10