The first month of each year brings a flurry of personal experiments. It’s a popular belief that it takes 21 days to start a new habit (though it’s really closer to 60), causing many imbibers to believe the 31 days of January are plenty to set them on the right track. Maybe it’s going dry for the month. Maybe it’s a new workout routine. Or perhaps it’s adjusting one’s diet.

Some choose to cut out gluten — a naturally occurring protein found in certain grains, like wheat — for a month to see if it helps with brain fog, inflammation, or other of the myriad symptoms attributed to gluten sensitivity. If the shift works, you might just get to enjoy 2022 as a more focused, less bloated you. And if nothing changes? Onto a gluten-full February.

If you’re removing gluten from your diet just to see how it will affect you — and even if you’ve been diagnosed with a gluten allergy or Celiac disease — you don’t have to give up homebrewing. A few changes to the brew day and careful ingredient selection is all it takes to make beer that is 100 percent gluten-free.

“From IPAs to sours, to Belgian-style blondes, pastry stouts, and beyond, our customers have proven our malts can make any style there is,” says Twila Soles, CEO and maltstress of Grouse Malt House in Wellington, Colo.

When Soles founded Grouse 2013, she only made millet malts kilned to various colors. Millet can be thought of as the base malt in gluten-free brewing, while buckwheat, with its cereal-forward flavor, is most often used to adjust color and add flavor — the way specialty malts are used in traditional brewing.

For example, Soles’s favorite malt is her Goldfinch Millet Malt. With “bready, biscuit flavors sprinkled with some caramel and bran flake,” this is a great gluten-free alternative to a Munich barley malt.

Today, Grouse makes over 25 malts and roasts of gluten-free grains, including malted maize and various buckwheat options. Those are the heavy hitters, but rice, corn, and even oats (as long as they are certified gluten-free) can also be used.

Using the same techniques as traditional maltsters, gluten-free malt can be made to any color specification on the spectrum, so there isn’t a limit to the styles a gluten-free brewer can create.

Karen Hertz, founder of Holidaily Brewing Company, says with innovations in gluten-free malt in the last several years, her brewery has been able to put out styles like Oktoberfest, blonde ales, and imperial stouts. “Ultimately, we want to make a world-class craft beer, and you wouldn’t know if it is gluten-free or not,” says Hertz.

Even though a recipe with millet or a combination of millet and buckwheat can clone the flavors of traditional beer styles in a gluten-free context, there is room to experiment with other gluten-free grains. Frederic Pelletier, head brewer at Glutenberg Brasserie in Montreal, likes brewing with quinoa because its high protein content can help improve head retention and mouthfeel. It can also impart haze to a NEIPA, he says.

One of his most highly rated beers is the Glutenberg Stout, which has malt-derived flavors of espresso coffee, dark chocolate, and ripe fruit — just like barley malt-based stouts. 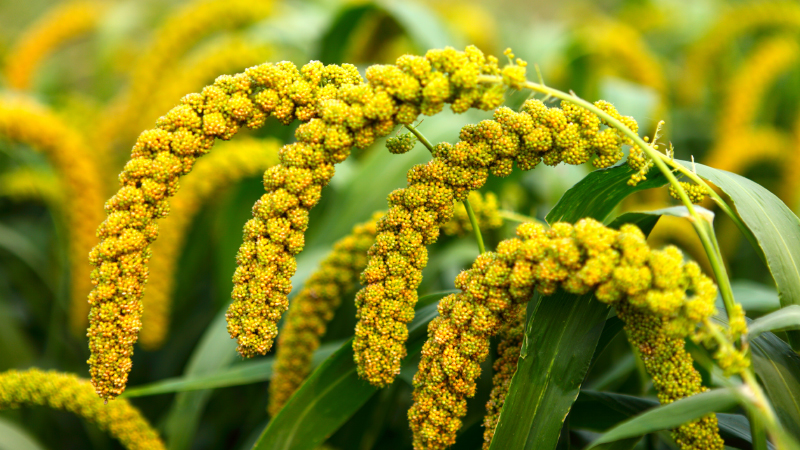 When it comes to this beer style, “you have to confirm that every ingredient is gluten-free,” says Hertz. “Not just the grains, because you never know.”

Malt is the most obvious culprit when it comes to bringing gluten to your pint, but when it comes to brewing, yeast may be at fault, too. Many liquid yeasts are packaged with small amounts of wort made with traditional brewing malt, which has a high gluten content. For gluten-free homebrewing, dry yeast is best. All Danstar, Red Star, Safale, and Saflager yeasts are gluten-free.

Now that grains and yeast are taken care of, it’s time to move on to brew day with whatever hops you have on hand. (Luckily, all hops are gluten-free).

There are many reasons barley is the perfect grain for brewing beer: It is packed with enzymes that convert its starches to sugar, it takes well to malting, and it has a thin husk surrounding an abundance of starch (the beginnings of fermentable sugars). Gluten-free grains don’t come with any of these benefits — most notably, that easily breakable husk, perfectly structured to create a filter bed.

“The grains we use are mostly smaller than barley or wheat,” says Pelletier. “The ratio of starch to husk is different, too, so we need to mill our grains almost to flour to access the starches.”

This means setting your mill on the smallest or tightest setting, or making a special request of your homebrew shop to mill the grains very finely. A typical barley malt mill will not allow for proper starch extraction, which would result in a very low-alcohol beer that’s thick with unfermentable starch.

When brewing with a large percentage of traditional barley malt, there is no need for additional enzymes; they occur naturally in the barley.

“Gluten-free malts do not have the same inherent enzyme package that barley malt offers,” says Soles. “We’ve had to think outside the mash tun a bit to accommodate this fact and the fact that our non-traditional malts have a higher gelatinization temperature than barley malt.”

This means looking for enzymes that occur outside the grains being used. Grouse Malthouse recommends using Ceremix Flex and Ondea Pro — two products that provide a handful of enzymes to break down the starches in gluten-free malt. These enzymes will leave behind some unfermentable sugars in the wort, imparting the final beer with body and a full mouthfeel. For a very dry, brut-like gluten-free beer, glucoamylase can be used in both the mash and the fermenter.

Once you’ve picked your enzymes, it’s time to mash. The steps in a gluten-free mash are more extreme than those in barley malt mashing because of the enzymes and starches involved. The first step is to heat the mash to around 125 degrees Fahrenheit. Then, add the enzyme to the mash tun and let it rest for 20 to 25 minutes.

Then, raise the temperature to 170-175 degrees Fahrenheit to ensure all cereal starches are gelatinized. This high temperature will denature the added enzymes, but they will work at an accelerated rate until they are denatured, which results in improved fermentability.

“Once the mash is done, it’s pretty much a standard brew day,” says Pelletier. The mash can be sparged like any typical all-grain batch. “A big tool to home brew gluten-free beer is patience,” says Pelletier. “The lauter is going to be really long.”

Because the grains are milled, separating the liquid wort from the grain bed (a process known in brewing as lautering) is more time consuming and difficult. To break up the tightly packed grain bed, Pelletier suggests adding rice hulls to the mixture. Rice hulls don’t break down in the heat of the mash, so they remain rigid — allowing for better runoff of wort — and they won’t impart any color or flavor to the final beer.

After running experiments on lautering and efficiency, the team at Gluten Free Homebrewing recommends between 10 and 15 percent of your grain bill being rice hulls when brewing with gluten-free malts.

Put it All Together

Dietary restrictions don’t need to affect your ability to homebrew. With adjustments to the malts, mill size, mash, and the addition of a few rice hulls, designing recipes and brewing gluten-free beer at home can make for a fun new challenge for enthusiasts and dieters alike.

As Soles says, when she launched Grouse Malt House in 2013, the drinking public didn’t think beer could taste great and be gluten-free, but with updates in malting technology and brewing techniques, “that paradigm has been shifted.”