The University of California, Los Angeles defines sustainability as “the balance between the environment, equity, and economy.” While the craft beer industry has recently been the topic of numerous conversations relating to equity and economy, the environment — and, more importantly, the industry’s impact on it — can seem like an afterthought.

But progress is being made by breweries of all sizes. Sustainability measures in the beer industry include global efforts like Molson Coors’ water use reduction programs, as well as national milestones like Sierra Nevada Brewing Company’s North Carolina facility becoming the first LEED Platinum-level production brewery in the United States. Meanwhile, Hardywood Park Craft Brewery became the first brewery in Virginia completely powered by renewable energy, and New Belgium recently released a Fat Tire Amber Ale, the first carbon-neutral-certified beer in the U.S.

That’s not to say implementing large-scale sustainability measures isn’t daunting or overwhelming for a small brewery. Still, Patrick Murtaugh, co-founder and brewmaster at Hardywood, feels that doing so is our collective responsibility — plus there’s the growing financial incentive. “Protecting the environment is not only important to us, but to our customers as well,” he says. “Customers not only appreciate our efforts, they expect them.” 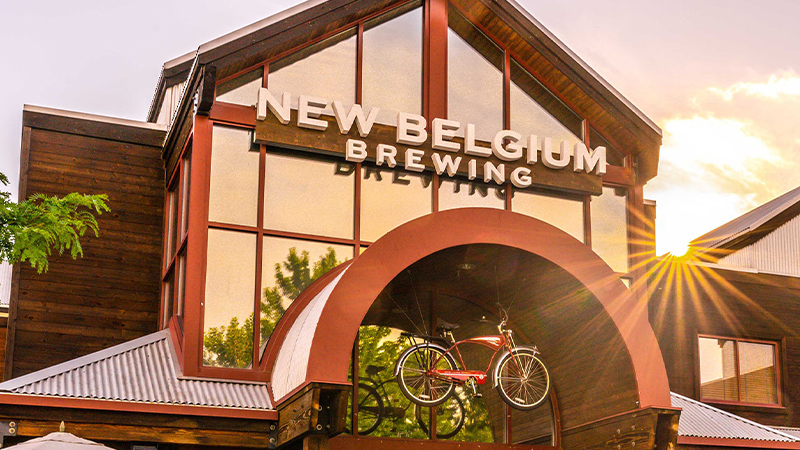 Mandi McKay, director of sustainability and social responsibility at Sierra Nevada, agrees, pointing to a steady increase in consumer demand for what she calls “responsible business practices.” “We feel we have an obligation to do the best we can to operate sustainably and encourage others to do the same,” she says.

According to David Walker, co-founder of Firestone Walker Brewing Company, investing in sustainability has also yielded long-term financial benefits, and he goes so far as to say it may be the difference between success and failure for the 26-year-old brewery. “It’s hard to list the total savings we yield from leaning into sustainability as it impacts our entire enterprise,” he explains, listing recent sustainable choices the company has made, from installing a solar array to using LED lighting and efficient ventilation.

Not investing in sustainable business practices today could spell trouble tomorrow, says Dr. Mark Falinski, head of research and sustainability at Finch, a platform that assesses the sustainability of everyday products so consumers can purchase the best option available. He points to climate catastrophes like the current drought in the American West as long-term problems that industries that rely on water (like brewing) will eventually have to face.

“These drought conditions decrease the quantity of water, but they’re hurting the quality of water as well,” he says, explaining that groundwater in drought conditions tends to be “harder” or contain excess salt, which requires more energy to bring to neutral. A lack of water also affects agriculture, diminishing hop and barley returns and therefore increasing prices. “We’re already seeing these dramatic weather events increasing in frequency and intensity, and it’s only expected to get worse,” says Katie Wallace, director of social and environmental impact at New Belgium Brewing Company. “If you don’t have a climate plan, you don’t have a business plan.” Executive director of the North American Craft Maltsters Guild Jesse Bussard (who goes by she/they pronouns), says climate change remains one of the most concerning threats that the trade faces in modern times. “It’s affecting the capacity for us to grow barley,” she says, pointing to Montana, Idaho, Wyoming, and Colorado as the top states for barley production which, in 2021, collectively faced the worst crop output in recent history. Bussard believes that scientific trials, like Heineken’s attempt to reduce agriculture-related emissions by 33 percent by 2030, are promising, but not happening fast enough.

“Remember, it takes 10 to 15 years to evolve a new variety. Will we develop that new variety in time?” they wonder.

In the meantime, breweries can take steps toward sustainability in their everyday operations. And it doesn’t need to be a multi-million dollar investment (like Molson Coors’ $85 million investment toward eliminating plastic six-ring holders) or decades-long pledges (like AB InBev’s goalposts for 2025) to make a difference. Bussard says identifying an immediate need in your surrounding community is a great place to start.

“When you’re a small-scale producer, you have to look at what you can actually do,” Bussard says. “You may want to do everything, but what is physically and financially possible for you? Look at your values — what’s important to you as a business?”

Some breweries, like Maine Beer Company, spell out their values plainly. “Start small and look for the solutions that are available to you,” says Anne Marisic, head of marketing and communication at Maine Beer Co. “Those small steps and changes to how you do things can have a lasting impact.” She points to state and federal grants to support sustainability measures, and also recommends partnering with like-minded companies as suppliers as well as for financial contributions. “We make sure to partner with businesses who match our focus on sustainability and will work with us to reduce [and] eliminate waste,” she explains, naming organizations like 1% For The Planet as compatible charities.

McKay believes that it’s never too late to start thinking sustainably and recommends tracking metrics like electricity and natural gas usage, as well as water consumption and waste generation, in order to establish a baseline of use. She also points companies toward the Brewers Association’s Sustainability Benchmarking Tool to compare their output to similarly sized breweries. New Belgium’s Drink Sustainably site is another resource for breweries, beer drinkers, consumers, and all businesses to learn about climate change and take action. “Recognize [that] sustainability is an exercise in continuous improvement,” McKay advises. “Tackling one thing at a time is the best approach, otherwise it’s easy to get overwhelmed.”

Without concrete actions toward brewing more sustainability, more brands will feel the pinch in everything from transportation costs to ingredient availability. “We’re at a point where sustainability is no longer good enough, that’s just treading water,” says Marisic. “Many of the organizations we work with are moving beyond sustainability and focusing on regenerative options in agriculture, aquaculture, and seeking new solutions for our energy needs.”

A recent report by the United Nations Intergovernmental Panel on Climate Change says climate change is poised to make the world “sicker, hungrier, poorer, [and] gloomier” if we continue to do nothing, or simply not do enough. And while it’s not too late, it’s getting close. If that happens, losing access to craft beer will be the least of humanity’s problems.