There seems to be a new batch of Bravolebrities — a term lovingly used to describe those who’ve found fame from Bravo’s myriad reality shows — each year. Many of them launch side hustles from Housewife-approved lip kits to CBD brands, but given Bravo’s love affair with booze, the beverage space has proved especially exciting for cast members with an entrepreneurial itch. While Bethenny Frankel’s Skinnygirl wines and cocktails may be the best known, there are plenty of wine, spirit, and RTD brands on the market owned by some of Bravo’s most beloved personalities.

To ensure your bar cart is Andy Cohen-approved, read on for the full lineup of every Bravoleb-owned booze brand. Launched in 2009, former “Real Housewives of New York” star Bethenny Frankel’s Skinnygirl brand started with one ready-to-drink bottled Margarita, the birth of which was actually documented on screen in an early season of the show. Since then, the brand has expanded to offer a range of six cocktails (including a Cosmo and spicy Margarita), wines, and a vodka. As the brand was founded by the “Skinnygirl” herself, all of the products are marketed as low-calorie options. Frankel sold the brand to Suntory in 2011 for an estimated $100 million. When “Real Housewives of Salt Lake City” star Lisa Barlow isn’t battling it out with fellow Housewife Meredith Marks, she’s working on her various entrepreneurial undertakings, including her role as founder of Vida Tequila. Though a celebrity founding a tequila brand is nothing new, fans of “RHOSLC” were stunned by the practicing Mormon’s booze venture. A Housewife can rarely be found without a glass of rosé in hand. So when “RHONY” star Luann de Lesepps (a.k.a. “The Countess”) stopped drinking, she quickly came up with a solution. Her non-alcoholic rosé brand Fosé allows the songstress to enjoy her pink wine, sans booze. She now shares the faux rosé with her “Real Housewives Ultimate Girls Trip” castmates. Created by “Summer House” stars Kyle Cooke and Amanda Batula, who met on the show and tied the knot in September, 2021, Loverboy is an RTD brand offering a wide range of cocktails and hard teas, including a beloved boozy chai tea and a canned Espresso Martini. Lisa Vanderpump, of “Real Housewives of Beverly Hills” and “Vanderpump Rules” fame, is a restaurateur and self-professed lover of the color pink. It therefore came as no surprise to fans when she launched Vanderpump Rosé in 2017 along with her daughter, Pandora. The wine brand has since expanded to include a Chardonnay and Cabernet Sauvignon, and the restaurant mogul also owns a Sangria brand and a vodka which is, of course, bottled in a hot pink package.

Former “RHONY” star Dorinda Medley left Bravo back in 2020, giving her time to launch her Bluestone Manor bourbon brand the following year. The whiskey is named after Medley’s 18-acre mansion in the Berkshires, Mass., which used to house a speakeasy. The bourbon is also said to have been made in honor of Medley’s late husband Richard, who was a bourbon enthusiast. 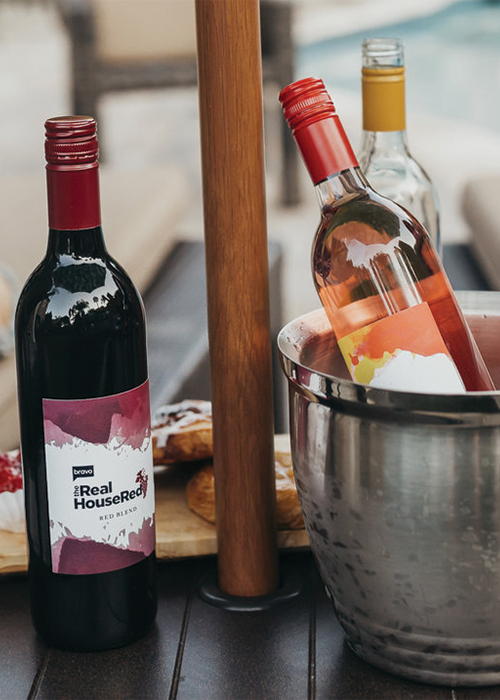 A wine line from the Bravo network itself, The Real Housewives Wine Collection is made in partnership with Nocking Point Wines and includes three wines inspired by the iconic series: The Real HouseWhite (a Sauvignon Blanc), The Real HouseRed (a red blend), and The Real HouseRosé. All three are certifiably ripe for “turtle time.”