This iconic modern classic was created in 1983 by London bartender Dick Bradsell at the Soho Brasserie for a guest — supposedly a model — who wanted a drink that would “wake her up and f*ck her up.” Not exactly subtle, but Bradsell was determined to deliver on his guest’s needs. He created a drink that he originally dubbed the “Vodka Espresso,” which later became known as the Espresso Martini.

Along with the Cosmopolitan, this cocktail is one that defined 1990s drinking. The balance of bitter, frothy espresso, vodka, coffee liqueur, and sugar creates a sum greater than its parts. When a famous supermodel walks into your bar and requests a drink with the instructions, “Wake me up, then fuck me up,” you deliver. And that’s exactly what the late Dick Bradsell did while bartending at London’s Soho Brasserie in the 1980s, when tasked with this particular demand. (Word on the street is that the unnamed patron was either Naomi Campbell or Kate Moss, but as is often the case with cocktail lore, the details are blurry.)

In response, Bradsell — who went on to be regarded as the father of London’s cocktail revival in the `90s — crafted a rejuvenating blend of vodka (the preferred spirit at the time), espresso, and coffee liqueur. He initially dubbed the drink the vodka espresso, but it has since become known as the Espresso Martini. The caffeinated tipple fueled London nightlife throughout the `80s and `90s, and established itself as a London cocktail staple.

“From brunch to late-night parties you will always see someone sipping on an Espresso Martini,” says Andrei Marcu, bar manager at Coupette in London. “The beauty of London is that you can find a good Espresso Martini no matter where you are. You can just walk by a bar on a completely random street, go inside, and you will get a great Espresso Martini.”

In London, most bars are equipped with espresso machines — a tool that is much rarer to find behind bars in other parts of the world, especially in America. (That’s one reason the Espresso Martini hasn’t reached such heights in the States). While Australia, with its prominent coffee culture, gives London a run for its money when it comes to crafting world-class Espresso Martinis, its city of origin has set the modern standard of excellence for the cocktail. Whether you’re at a pub or a 5-star hotel bar, you can expect to receive a well-executed version of the iconic drink. It has become so popular that London hosts an annual five-day Espresso Martini festival.

“I think what made it popular is the fact that it managed to make it on menus in chain restaurants and bars,” Marcu says. “Perhaps their recipes were not showcasing this wonderful drink at its best, but it helped with spreading the word around, and consumers started requesting it and enjoying it more and more.”

Agostino Perrone, director of mixology at Connaught Bar in London — named as the World’s Best Bar in 2020 — credits the rise of coffee culture and the emphasis on sourcing high-quality, locally roasted beans as additional reasons for the Espresso Martini’s devoted following. With the increased focus on premium coffee, new coffee liqueurs have also entered the market, further elevating the cocktail.

But even though most bars in London can make Bradsell’s modern classic, it isn’t a simple cocktail to perfect — which is why you’ll find a quality Espresso Martini hard to come by in cities such as New York. Here are some tips for yielding a top-notch version, wherever you happen to live.

WHAT TO DO WHEN MAKING AN ESPRESSO MARTINI

Use fresh espresso with a good crema.

If there is one best practice for enhancing your Espresso Martinis, it is this one. Without a freshly brewed, strong espresso, your cocktail is set up for failure. The crema (the tan froth that floats on top of the espresso after it’s brewed) contains fatty oils that give the cocktail its head — a detail that’s essential for the drink’s texture — and the strength of the brew ensures that the cocktail doesn’t taste over-diluted.

“The espresso roast is crucial,” Marcu says. “Coffee is very complex in flavor. The roast you are using and the way you are pulling your coffee will make the difference in your Espresso Martini.”

Reach for a premium coffee liqueur.

It goes without saying that poor ingredients will yield a subpar cocktail. Regardless of your technical ability and know-how, a cloying, dull coffee liqueur will inhibit your ability to craft the perfect Espresso Martini. Fortunately, new craft coffee liqueurs have entered the market, vastly improving the potential of the Espresso Martini.

“Over the past decade, the evolution of coffee and cocktail culture has seen the arrival of a variety of inventive drinks featuring premium coffee beans and liqueurs,” Perrone says. “We [at Connaught Bar] tend to rely on two choices: Galliano Ristretto and Mr Black Coffee Liqueur. Galliano Ristretto reflects the classic Italian coffee tradition, revolving around the iconic espresso. It has a concentrated and sharp flavor profile. Mr Black is the product of the new coffee wave coming from Australia. It’s a cold brew featuring a wider spectrum of intriguing aromas.”

Anna Sebastian at The Langham London’s Artesian also sings the praises of Mr Black coffee liqueur, adding that her bar also uses it for its house Espresso Martini. “Quality products are so important to really highlight the drink,” Sebastian says. “I would always recommend spending what you can to have better ingredients.”

As always, technique is everything. “The way you are shaking the drink, the type of ice you are using, and how much you aerate make the difference,” Marcu says. If you’re using a premium espresso, a super-premium vodka, and a quality coffee liqueur the rest is up to you.

“First, I pour all my ingredients in a shaker,” says Marcu. “Next, I hand-blend the mix just to make sure I incorporate as much air in the liquid as possible. Third, I shake the drink with good ice cubes [read: proportionate and clear]. And last, I strain the drink from the ice and give it a quick dry shake before pouring it in a chilled coupe or Martini glass from the freezer. I always get the perfect texture using this method.”

Sebastian from Artesian also encourages a quick blend of the ingredients for increased aeration. It’s not necessary, but it requires less energy and effort from the bartender, which could be beneficial over the course of an evening. You’ll also want to make sure that you fill up the tin with a hefty amount of ice. The hot espresso will cause the ice to melt more quickly than it normally would, so it’s imperative to have enough ice in the tin to maintain a temperature low enough to avoid yielding an over-diluted, under-frothed Espresso Martini. 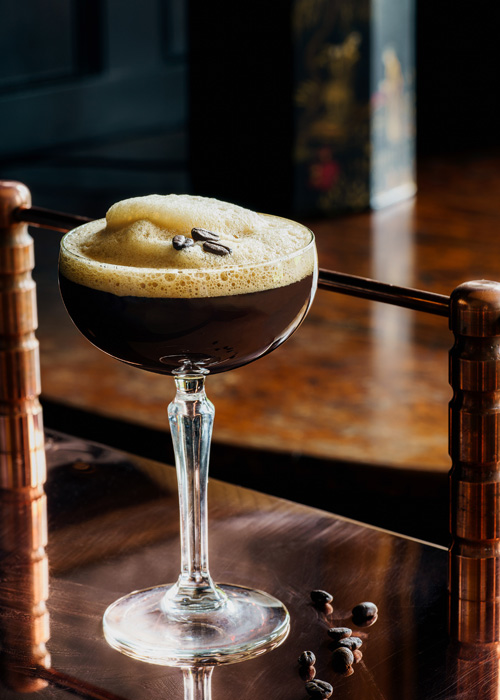 WHAT TO AVOID WHEN MAKING AN ESPRESSO MARTINI

Sweetness comes from two sources in this drink: the coffee liqueur and the simple syrup. It’s an easy cocktail to unknowingly over-sweeten. The Brix (sugar content) of every coffee liqueur is different. Depending on the one you use, you may or may not need simple syrup in your Espresso Martini, or you may want to make some slight adjustments to the recipe.

Mr Black coffee liqueur, for example, is more bitter and coffee-forward than sweet, so simple syrup could be beneficial when mixing it into an Espresso Martini. Old-school Kahlua, on the other hand, leans a bit sweeter, so simple syrup may not be necessary. Sugar also affects the texture of the Espresso Martini. The more sugar the drink contains, the creamier the froth will be. Using less sugar will yield a froth that’s airy like whitewater or sea foam. Perrone recommends paying attention to this detail while mixing because it is one of the few things that can send the mix awry.

“Over-dilution is your main enemy,” Marcu says. “You have coffee, which is 99 percent water. Over-shaking the drink will create a very weak and unbalanced drink.” It seems obvious, but this salient technical detail is worth paying extra attention to.

If you opt for a quick hand-blend, half of the work is already done for you, because the action generates a froth without dilution. But, if you’re shaking the cocktail with tins, as most bartenders tend to do, there is a fine line between thoroughly shaken and over-diluted. You might not nail it your first time around, but after making a few Espresso Martinis you’ll get a feel for how much is too much, and how much is just right. As always, practice makes perfect.