No dish sings “Rule, Britannia!” quite as proudly as a plate of fish and chips. As British as rain delays at Wimbledon and double-decker London buses, the combination of golden, crispy, battered fish, and chunky chips (like French fries, only better), is enjoyed in every corner of the United Kingdom.

Traditionally served in fish and chip shops, called “chippies,” the dish also finds a home in village pubs, chain restaurants, and fancy gastropubs. When this writer worked as an apprentice chef at a five-star London hotel, the most popular dish on the bar menu (by far) was the fish and chips.

According to Professor John K. Walton, historian and author of “Fish and Chips and the British Working Class,” Londoners first cooked battered fish at around the same time Queen Victoria took the throne, in 1837. Fried “chipped” potatoes were invented some 40 years later in Lancashire, a county in the northwest of England. It’s not known who first combined the two ingredients, but the dish’s origins are believed to date to some time in the 1870s.

The secret to the dish lies within perfecting the batter. The ideal preparation sees a fillet of meaty white fish, such as cod, haddock, or pollock, served in a batter that’s light but crispy, fried but not greasy, and as golden as a pint of British ale.

Indeed, beer is a key ingredient in well-made fish and chips. Adding beer to a batter made from flour and water boosts flavor and provides a “lighter, crispier” coating, Gordon Ramsay explains in a 2005 episode of “The F Word.”

The batter also protects the fish during cooking. As the mixture crisps, it forms a shell around the fish, locking in moisture and steam-cooking the fillet. “The quick frying methods used today and the high-quality oils used by fish and chip shops, mean that very little oil, if any, gets into the actual fish,” Gray says.

Heston Blumenthal, the chef and owner of three-Michelin-starred Fat Duck and Dinner by Heston Blumenthal (two Michelin stars), says the key to a crispy batter is carbonation. Blumenthal adds beer at the last minute, and advises against mixing too much so that bubbles aren’t lost. (A lumpy batter also provides an interesting texture, Blumenthal says.)

He adds his batter to a syphon and injects with carbon dioxide cartridges before chilling it. Carbon dioxide is much more soluble in chilled liquid, he explains, and cooling provides “more gas, more bubbles, and a crisper, lighter batter.”

At “chippies” and fine-dining establishments, chefs take certain liberties with the dish. Some fish and chip shops opt to fry their chips in beef dripping instead of oil. Many serve it with tartar sauce or mushy peas — a mint- and vinegar-spiked pea puree. No matter where you are in the country, chips are almost always seasoned with salt and malt vinegar.

Glaswegians enjoy their fish and chips with a side of pickled onions, while Manchester locals sauce with a splash of gravy. Birmingham residents enjoy with a curry-flavored dipping sauce and Londoners opt for mayonnaise.

Brits honor the dish on the first Friday of every June, when they celebrate National Fish and Chips Day. According to a 2014 survey, over a third of U.K. residents eat fish and chips more than once a month. 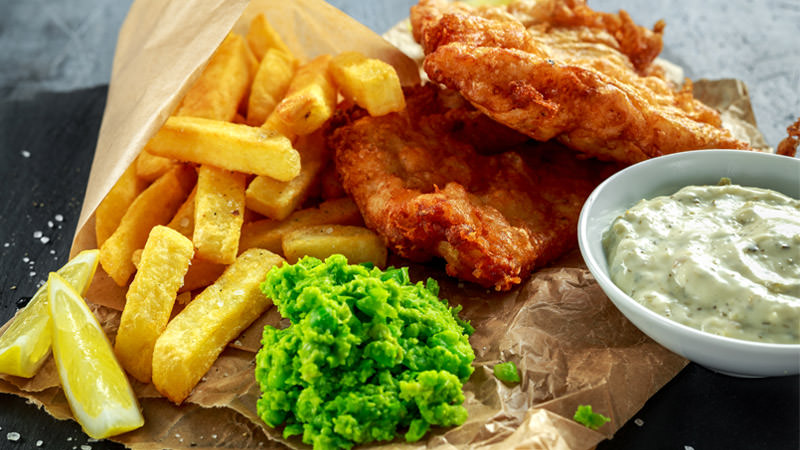