This past Wednesday, a Starbucks in Williamsburg, Brooklyn, attempted to slide into the borough’s cool kids club with their new Starbucks Evenings program. After 4 p.m., along with the usual coffee menu, they now offer a separate “evening” menu accompanied by a wine list and a craft beer selection. In a city where small business is the lifeblood of a neighborhood, I decided to check out this endeavor to see if it stacked up against the local competition. Also, being a wine bar/restaurant owner myself, and having built and maintained a wine program for some years now, I was curious to find out how Starbucks mixed its Evenings idea with the current coffee-centric atmosphere.

The first thing I noticed was that this wasn’t your average Starbucks: clearly, this location caters to Williamsburg by crooning the hipster aesthetic and doing away with the normal franchised look. The space is huge with a large tall communal table in the center and soft grey leather-bound benches along the wall. The wooden tables aim to have that “reclaimed” feel to them. There is the requisite exposed brick and chalkboard paint everywhere with clever greetings etched in trendy fonts, as well as invitations to coffee tastings (that’s a first). The staff is also different. Gone are the green aprons and black billed caps. In their place are slick black fabric aprons and every noggin is festooned with straw fedoras and golf caps. They’ve got the hipster uniform down.

The vision here, it seems, is that just as Starbucks has become a gathering place for offsite business meetings and screenwriter/novel publishing hopefuls to slurp down caffeine, it can also be an evening incubator with a more adult feel. Say you want to hold a book club meeting and your apartment is too hot. Come to Starbucks, have a glass of wine or two and a cheese plate and discuss. Sounds like a nice idea, right? 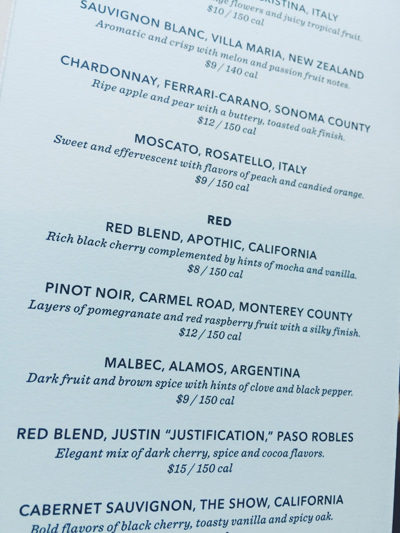 The thing is, ordering off the Evenings menu is a little different. I am not sure how long it takes some folks to order a coffee concoction, but wine and food just isn’t the same. For some it takes a few minutes to look over the offerings. If I want a Lange Estate Pinot Noir, am I going to go for the Artichoke flatbread or a cheese plate? Maybe I’m in the mood for the Erath Chardonnay from Oregon. Should I go for the bacon wrapped dates or the truffled popcorn? Both? They have ten unique food items for the Evenings program and ten wines, five whites (one sparkling) and five reds. Am I just too much of a wine geek that I want to briefly ponder my options?

It’s a bit anxiety-producing when you have a line of people waiting to order their regular coffee, and you want some time to choose between options. Those impatient eyes boring into you from behind really don’t inspire calm. So I found myself blurting out an order and hoping it worked: a glass of Pinot Noir, a cheese plate and an artichoke goat cheese flatbread please. I gave my name and was asked to wait in the same area as all the other coffee drinkers.

Waiting for my order I looked around and realized I was the only one that had taken advantage of the Starbucks Evenings. Sure, it was only about a half hour into the opening, but damn. The place was packed and almost every table was occupied by a Brooklynite with a laptop, and no beer or wine in sight. My name was called as a barista walked onto the floor and offered me my order, a wooden tray with two plates and a stemless glass of Pinot tucked between. And this is where things got a bit weird.

When you order a Frappuccino and want to find a spot to sip and enjoy, all you have in your hand is a cup. I, on the other hand, was walking with two plates balanced precariously on each side of a tray that was too small for said plates, with a wine glass balanced in between. It felt very school cafeteria. Here I was, the only person with booze, trying to find a spot to sit among a sea of Powerbooks. It was like being the new kid in class self-consciously searching for a place to have lunch, away from the various cliques. And in true high school form, as I walked around the floor scoping a seat, I was getting the hairy eyeball from almost everywhere I looked. ‘Don’t you sit next to me’ those eyes said, ‘I am doing something very important here on this mac of mine and I don’t need some boozer next to me sipping wine and eating cheese. You might spill that alcoholic red juice all over me.’ Weird.

‘I’m a grown-ass man’ I told myself, and strolled confidently. Pinot Noir sloshed back and forth in my glass as I walked to the front of the shop, where I found an empty window bar stool between two people clicking away. As I sat down and figured out my place setting, I caught unapproving sidelong glances from left and right. I worried that my spread was encroaching upon my fellow patrons who each had only a computer and an iced coffee.

As I surveyed the tray in front of me, I discovered that the wine glasses are “designed” by Starbucks and made by the glassware giant Riedel. Not bad. What was in the glass was your typical brand-name, inoffensive Pinot Noir with slight fruity notes, high toned acidity and a little too lean, even though the oak was apparent. Overall it wasn’t bad. 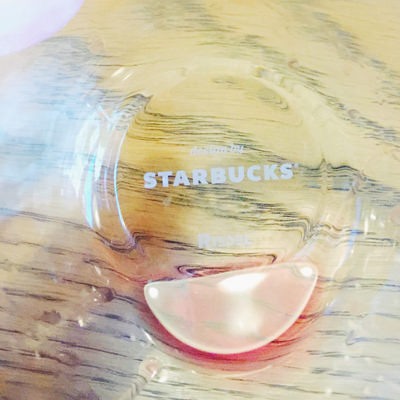 The food, on the other hand, was more curated. Somewhere in a boardroom there must’ve been a panel discussion of the trendiest small plate/winebar items from 2005 to the present, cross-checked with a certain Starbucks clientele demographic bracket. An average was taken and ten items were selected, mass produced, frozen, powdered and packaged, flavor profiles be damned! Just make it look good in the PR pics.

The artichoke and goat cheese flatbread had the requisite “artisanal” look to it, but it was lukewarm and could have used another few minutes in the microwave. I say microwave because the bread had visual char on the crust but no char flavor. Actually, the flat bread had hardly any flavor at all and was a little too flexible. It was completely overwhelmed by the Pinot. I mean, I knew it wasn’t going to be flatbread made that morning but they could have used a toaster oven instead, amirite?

The cheese plate looked like your average Google image search of a cheese plate with a wedge of what I think was Manchego, some over-processed white cheddar and a medallion of herbed infested goat cheese, accompanied by dried apricots that I really had to chew to get down, and an attempt at Quince paste that had the consistency of coagulated blood.

I went for a second round with a red California blend, medium-bodied with uniform vanilla and sweet spice that wasn’t bad at all. But the truffled mac and cheese I paired with it was on the level of Stouffer’s, capped with stale bread crumbs and also lukewarm! What is up with the lukewarm-ness, guys? Are they not hitting the right preset on that microwave?

While the wine wasn’t half bad and a bit more focused than the usual corporate establishment, the food is meant to be seen, not tasted. Decent wine, flabby food. My first thought was they want to franchise the hell out of this idea.

Reflecting on the food it occurred to me that this is the kind of thing I would only eat if I had limited options. And then it hit me. Airports! This program could be the new go-to during your next layover. Airport bars are pretty abysmal in the wine department and the idea of being in a familiar place while being able to sip wine that is a notch up from dark backlit drinking holes with automated pianos is somewhat comforting. And with an hour to kill in JFK or O’Hare I think we can all agree, the food basically tastes the same so at least we can sip some decent wine or a local beer from wherever we are.