For a bottle of sparkling wine to be labeled Champagne, it has to be made in Champagne, France and produced using the méthode champenoise. If that bottle is produced using the exact same method, anywhere else, it must carry a different name. The production method itself must even be referred to differently, méthode tranditionalle being the usual substitute. These rules are strictly enforced. They are codified in national laws, European Union regulations, and international trade agreements and treaties. When they are broken, in even the most tangential ways, lawsuits are quickly filed. While sparkling wine producers in some countries may ignore these rules, their bottles could never make it onto a shelf in the EU. Since 2005, the same is true in the United States. And yet if you’ve ever seen bottles of bubbly labeled California Champagne – perhaps produced by Korbel, Cook’s or André – what you’ve seen is perfectly legal. The loophole that makes these labels legal is the result of a fight that began in the trenches of the first World War, with roots going back to the nineteenth century. 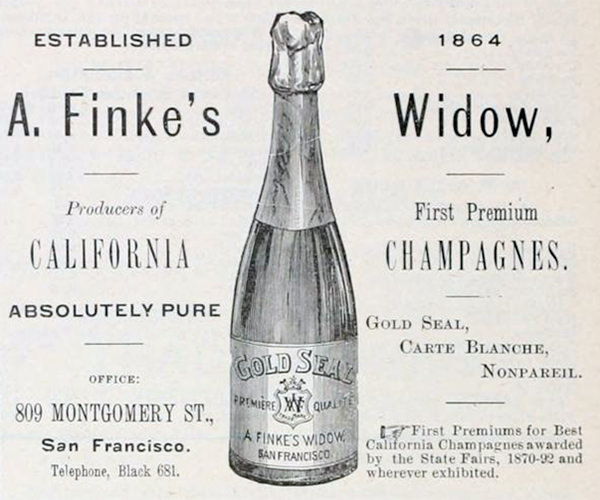 The preceding two images are from 1892, a year after the Madrid Agreement was signed by the major European powers. This agreement laid the basis for modern international trademark recognition. Protecting the ‘Champagne’ name internationally was among France’s goals in 1891. The United States would not enter into the system that the agreement established until 2003 – and even then the fight over the name Champagne remained unsettled.

As global trade grew in the early twentieth century, the popularity of real Champagne was established in new markets. While this was good for sparkling winemakers in Champagne, France – who were recovering from vine losses due to phyloxera — it also provided an irresistible incentive to sparkling winemakers in other locales to label their bubbly Champagne. The increasingly agitated winemakers in Champagne had little recourse outside of France and the nations that had entered into the Madrid Agreement. Even within France there were large, sometimes violent disputes due to producers sourcing grapes from other regions.

Champagne producers were dealt another blow when World War I broke out. The Champagne region, in a strategic position, saw intense battles. Reims, and Épernay, the de facto capitals of Champagne production, were largely leveled. Though some winemakers managed to produce vintages during the war, by 1917, nearly all production facilities had been destroyed.

The Treaty of Versailles, which brought an end to the war, is where the loophole was unintentionally opened that allows the continued existence of California Champagne. Article 275 of the treaty was designed – in part – to establish that only sparkling wine from Champagne could be labeled as Champagne:

Germany undertakes on condition that reciprocity is accorded in these matters to respect any law, or any administrative or judicial decision given in conformity with such law, in force in any Allied or Associated State and duly communicated to her by the proper authorities, defining or regulating the right to any regional appellation in respect of wine or spirits produced in the State to which the region belongs, or the conditions under which the use of any such appellation may be permitted; and the importation, exportation, manufacture, distribution, sale or offering for sale of products or articles bearing regional appellations inconsistent with such law or order shall be prohibited by the German Government and repressed by the measures prescribed in the preceding Article.

Although this article was inserted primarily because of a dispute between France and Germany over mislabeling of sparkling wines and brandies, the ultimate result was that the use of Champagne on sparkling wine labels was curtailed in all of the nations party to the treaty. We say party to, because although the United States signed the treaty, the Senate never ratified the treaty.

Despite the insistence by the French of a provision protecting her wines, that the U.S. never ratified the treaty was probably not a great concern in Reims and Épernay in 1919, as Prohibition was about to put California’s winemakers out of business. As the Paris Peace Conference came to a close, the French were likely more concerned with the loss of a large export market as this quote from the journal of an American participant illustrates:

[French Prime Minister Georges] Clemenceau had tea served for the party. He also had wine brought and proposed a toast to the peace and good health of the party. After the toast had been drunk he turned to me and said: “You had better have another one because you will not be able to get any of this (wine) when you get back home.”

California’s wine industry stagnated in the decades following Prohibition. Production didn’t pick up until the 1970s, which saw skyrocketing production of cheap jug wines. These jug wines often bore ‘semi-generic’ labels such as Burgundy, Chablis, and Chianti. The wines that bore these labels had nothing to do with the places they were named after. Carlo Rossi’s famous Hearty Burgundy – which retains its name under the same loophole as California Champagne – is a Zinfandel-based blend rather than Pinot Noir, which you might expect.

With wine production soaring, and American wine consumption rising, California Champagne was once again enraging winemakers in France. In 1983, the European Commission (the EU’s executive) and the United States opened up trade talks on wine. The Comite Interprofessionnel du Vin de Champagne (CIVC), a trade group formed in 1941 – to organize and protect winemakers during the German occupation – may have been the loudest voice during these negotiations, but there were other motivated parties – from Sherry producers in Spain to the owners of established American brands. It took two decades of negotiations, but finally, in 2005, the U.S. and the EU reached an agreement. In exchange for easing trade restrictions on wine, the American government agreed that California Champagne, Chablis, Sherry and a half-dozen other ‘semi-generic’ names would no longer appear on domestic wine labels – that is unless a producer was already using one of those names.

If a producer had used – or abused from the French point of view – one of those names prior to March 10th, 2006, they could continue to use the name on their label indefinitely. Although these names were and continue to be used for the most part by lower end winemakers, the CIVC were enraged in their long-sought victory. “It is an absurdity on a moral point of view,” Champagne producer and CIVC rep Bruno Paillard told Decanter back in 2005. “It’s sad that the USA, now a great wine country, continues to protect a few producers who are abusing the identity of others instead of using honest labeling for true consumer information.”

“Moral absurdities” aside, the issue of misleading consumers is more complicated than the CIVC would have you believe. Nineteenth century California winemakers – most of whom were European immigrants – referred to all sparkling wines as Champagnes. While there were certainly those who aimed to deceive — and no shortage of falsely labeled wines — advertisements and restaurant menus from the day typically made it clear where a given “Champagne” was from. The same is true over 150 years later. When a consumer picks up a bottle of California Champagne they may well believe that “all sparkling wines are the same,” but aside from the most geographically challenged among us, no one believes these bottles come from France. This may well be a problem, but it seems like a good one to have. When the typical wine drinker heads into a shop and asks for a good bottle of Champagne he or she is more often than not looking for “Champagne from France.”