We gave you a few options last year, all of them wine-related, and those are still easy to put together if you’re looking for last-minute ideas. But we wanted to expand your booze-costume related options, because, let’s face it, not everyone can go as Donald Trump or “Lion-Eating-Dentist.” And since going to the costume store at this point might be about as painful as going to Ikea, ever, why not pull some last minute DIY?

Get your best gal (or guy) pals and dress as the bar. These dresses look purchased (from a Forever 21 in Hell) but you can also just get a tight (tight) dress and paste or draw on your label of choice. If someone chucks Coke at you, don’t be offended. It’s a mixer.

You could, as this lady has done, purchase a sack with the Fireball logo on it, but why not just grab a bunch of Atomic Fireball candies, paste them to your body, and carry around a bottle of actual whiskey? (Since you can drink it and pretend to care about that adorable couples’ costume.) Who needs a tiny pumpkin costume when you can just put your baby in the bag that your Crown Royal came in? 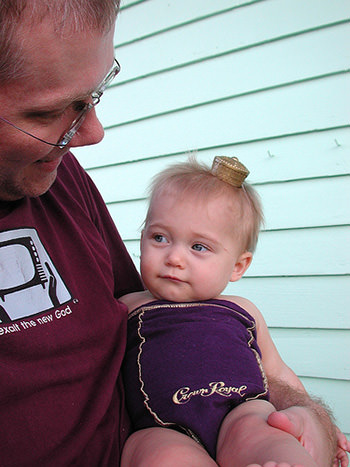 Not entirely sure what this is, but if you have a bunch of leftover Bud Light boxes, which you would if you chose to dress like this, and some tape, you can become this, and confuse people. And yes, that appears to be a Bud Light firearm. All you need is a sleeve of red solo cups, some strong glue, and a couple ping pong balls to subtly suggest you had an awesome, awesome time in college. Alternately, beer AND pong, clearly a purchased costume unless you have access to a massive Solo cup and a giant ping pong ball (maybe a white yoga ball?) 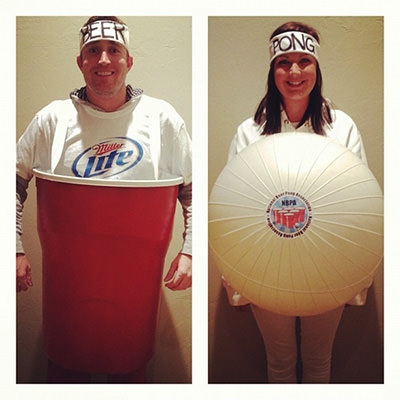 Grab that gold strapless dress you wore to Vegas that one amazing night, add some carefully applied piping and white fabric. We recommend Spanx if you’re actually gonna drink beer in this.