Last spring the phrase “Yes Way Rosé” (#yeswayrosé) seemingly exploded out of nowhere. By the end of the summer, the New York Post’s Page Six was hyperventilating over an imminent shortage of rosé in the Hamptons. Had an insatiable demand for rosé suddenly exploded out of nowhere, leading to a run on the pink booze bank? Yes and no. What has actually happened over the last decade has been a rapid, still-accelerating and somewhat contradictory shift in American wine preferences.

As recently as the 1990s, for most Americans, “blush wine” aka rosé aka “White Zin” was something your grandmother drank, possibly from a large jug. About a decade ago, tastes began to change, leading to falling sales of cheap sweet pink wines and rising sales of premium ($12+) dry rosé wines. Had American palates suddenly shifted away from sickly sweet concoctions, at least when it came to wine? For rosé, the answer would appear to be yes. Yet at the same time red blends packing large doses of residual sugar — think of California wines named after desserts — have also seen soaring demand, with many citing The Prisoner as the spark of this craze (how sweet that wine was back in 2001 versus today is a touchy issue). This period also saw the relentless rise of Moscato, another wine that packs in the sugar. Recent data out of California suggests that the only segment of the American wine market that might be growing faster than ‘premium dry rosé’ is the vague ‘(sweet) red blend.’

Absent more data it’s quite difficult to square these contradictory trends, though if we had to make a bet, we’d say that the continuing democratization of wine and its embrace by more and more Americans is making room for more and more wines on both ends of the sugar spectrum. And that’s the best news of all — because as we always say at VinePair, drink what you like.

The Countries That Drink The Most Rosé

While population plays a large part, certain countries — America among them — have an unquenchable thirst for rosé. This map is based upon Euromonitor data for 2013 of rosé consumption (both dry and sweet). America Is The World’s 3rd Largest Producer Of Rosé

Production of rosé in the United States is actually declining, as the majority of rosé we produce is sweet blush wine (e.g., White Zinfandel), which is falling out of favor, especially among Millennials. Imports Of Rosé Are Booming

As American tastes shift to drier rosé wines, we’re turning to the rest of the world to satisfy our thirst. 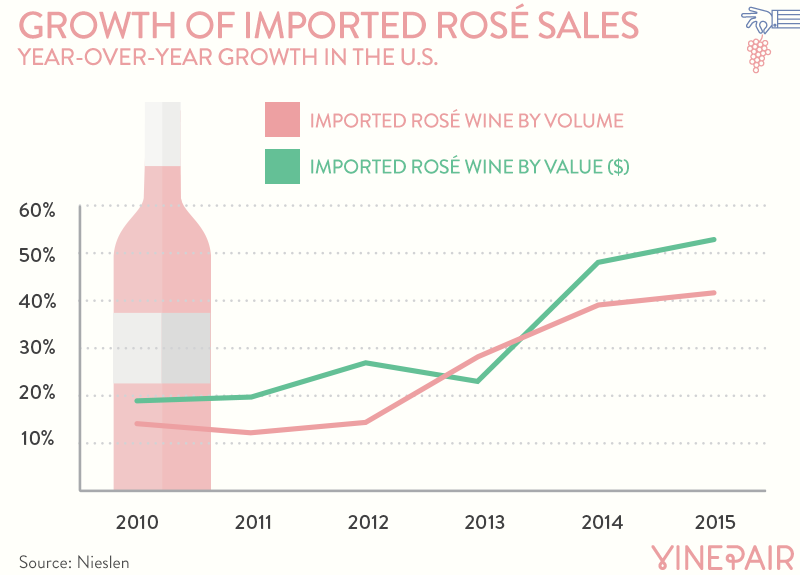 Exports Of Rosé From Provence Are Booming

Many consider Provence the benchmark for dry rosé, which is reflected in the astounding leap in exports from the southern French region to the United States. Rosé Search Volume At Google Has Been Rising For A Decade

Although we associate rosé with the summer months, Google Trends reveals that December is typically the month when searches for rosé peak. July 2014 broke that trend, setting the current benchmark for rosé search volume. Looking back at the most recent five years of Google searches for rosé, we can see strong regional trends. As with all things alcohol consumption related, Washington, D.C. makes a strong showing. While Miami — with its year-round seasonable weather — earns a strong second place in rosé consumption, the New York City metro area drinks up 1/5th of all the rosé America imports. Want to learn more about rosé? See the 10 shades of rosé you should be drinking.