So, here’s the thing about rye whiskey: it’s not terribly common for small brands to produce it. Rye has gained a reputation as being harsh, and to an extent it’s fallen out of American favor. But it’s coming back in style, especially with the rise of America’s craft cocktail culture. Still, a lot of the available rye out there is made by bigger companies, or distilled by infamous Indiana distillery MGP. Yes, full disclosure: this list includes whiskies distilled by MGP. It doesn’t mean these whiskies aren’t different from one another, because various aging and finishing processes have to be taken into account. Another technical point: America defines rye whiskies as consisting of a mash bill of at least 51% rye. This definition is different in Canada, where “rye” is sometimes used as a blanket term for whiskey. So, the rye whiskies we’re listing below meet the American definition.

All that said, while you can make a Manhattan with bourbon, this cocktail really shines when fashioned with rye. Rye is spicier, brasher, and less sweet than its corn-based cousin. The Manhattan is more subtle in sweetness than the Old Fashioned, in part because the former typically calls for sugar or simple syrup as opposed to the latter, which requires sweet vermouth. However, rye whiskey also delivers more grit and spice than bourbon. Also, Manhattans are served up (without ice), whereas Old Fashioneds are the rocks. With no ice bobbing around in your glass, your Manhattan needs to be made with rye you truly love sans dilution. We’re sure one of these seven will do. We have a hunch that Knob Creek uses corn in their rye whiskey. Why? Because despite being 100 proof, this rye delivers a deep caramel and molasses flavor that reminds us of none other than their bourbon. Although this is a big whiskey, it’s smooth enough to mix comfortably in a Manhattan. You’ll still get a little burn, but what would Manhattan be without struggle? 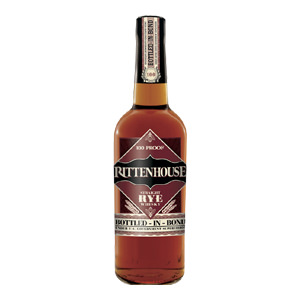 This is super, proto-rye. It has that characteristic spice, but in this case it’s expressed twofold. There’s woodsy spice, and vegetal spice. If you want a multi-layered Manhattan, Rittenhouse 100 will do the trick. Warm chocolate and bright citrus also mingle on the palate, stretching this whiskey in different yet somehow cohesive taste directions. Between the tang and the sugar, the earthiness and the oak, Rittenhouse 100 aces balance. This whiskey is bottled in Vermont and sourced from Canadian whiskey in order to achieve its 10 year aging statement. What makes WhistlePig so good? Well, it’s 100% rye, quite unusual in the rye category, and exceptionally velvety and gentle. While savory notes are present, you might expect a 100 proof, 100% rye to be more aggressive and dry, but WhistlePig is far from that. Finished in bourbon barrels, this whiskey is so utterly drinkable that if it weren’t for the high price point (around $80-$100) we’d bet this would be most bars’ go-to Manhattan whiskey. You can still use WhistelPig in the Manhattans at your home bar, however. There are older expressions of WhistlePig, but we’d start with the 10 year. By the way, a whistlepig is a groundhog. Like WhistlePig, Dickel has a high rye content that clocks in at 95%. The other 5% is malt, which actually adds toffee richness. All in all, this is a sweet rye that makes for easy drinking. If you want a Manhattan on the lighter side, we’d give this a try. Dickel also chill filters their whiskey and runs it through charcoal, which is literally called “mellowing.” Chill-filtering can smooth out the rough edges of a spirit, which has its positives and negatives. However, in the case of the already strong Manhattan we think a softer rye can be a good thing. Feel free to up the ratio of rye to vermouth to correspond to Dickel’s easy character. “Finishing” is when you take an aged whiskey and stick it into a barrel that used to hold something else. In the case of Angel’s Envy Finished Rye, the juice was finished in rum casks. Actually, those rum casks originally held Cognac. So basically, the aging process behind Angel’s Envy Finished Rye is like Inception. The results are a luscious, tropical rye with a warm sugar-packed nose that follows with a palate of fruit, oak, and banana bread. You’ll get rye spice too, don’t worry. If you like tiki drinks, make your Manhattan with Angel’s Envy. Hey, guess what? This is one of the few rye whiskies that’s actually been around since pre-Prohibition. Pretty cool, huh? This rye is fruity, minty, a little bitter, but very flexible. You could drink this with Coke or dress it up in a Manhattan. Old Overholt isn’t here to cause a scene, it’s here to get the job done, that job being to deliver you a perfectly quaffable rye. Oh, and at an average price of $17, Old Overholt has vintage mystique and affordability. Bulleit Rye is a cult whiskey, but so be it. A spicy-sweet nose (sort of like alcoholic chai) gives way to a mouth full of stone fruit and cinnamon. The finish is easy but packs in a little smoke. Like Dickel, this rye is indeed 95% rye, but it stands its ground as a reined-in product, never spilling into the territory of moonshine-esque harshness. The stone fruit flavors will play well with the maraschino cherry garnish of a Manhattan, but feel free to take it a step further and tip in a little Luxardo maraschino cherry liqueur for a cocktail that tastes like you went on a cherry-picking date (we know you love those).

And Lastly, As A Bonus… While we know we said we’d give you seven amazing ryes, we’d be remiss if we didn’t mention one particularly cool unaged rye: George Washington’s Rye Whiskey. As you may know, Washington loved his booze, and this product is an homage to that. It’s an unaged, predominantly rye based whiskey that’s shockingly sweet and palatable for having never touched oak. It would make for a supreme non-traditional, more raw Manhattan. Unfortunately, it’s available at Mount Vernon and not many other places. Still, we thought we’d mention it for those of you looking to make a trip.