Call them juicy, call them hazy, call them crazy, New England-style IPAs are here to stay(zy).

The cloudy, tropically hoppy, bitter-banishing ales that subverted the IPA style and then created a new one, with their sexy exterior and easy-drinking interior, are now a national obsession.

Officially recognized by the Brewers Association as the Juicy or Hazy IPA, this beloved sub-genre of India Pale Ales was (unintentionally) spearheaded by Vermont brewers like the Alchemist and Hill Farmstead, and then popularized by brewer brethren like Trillium and Tree House. It has now gone from niche to national, with big-time small brewers like Samuel Adams, Sierra Nevada, and others taking a stab.

Since not everyone is fortunate enough to live near the local breweries that are popularizing the NEIPA, we’ve rounded up and ranked a selection of nationally and regionally available brands that you can get your hands on at a local beer shop or grocer — no 11-hour wait required. Both ahead of its time and behind the times, Schlafly Northeast IPA is balanced, perhaps to a fault: The “bold and unfiltered” double IPA has a definitive bitterness that the NEIPA style typically leaves behind. The fruity flavors lean more toward grapefruit than tropical, and the hop scheduling and grain bill fell short of the juicy sweetness typical of the style. New Belgium took one of its core brands, the Voodoo Ranger, and pushed it to hazy new territory with Voodoo Ranger Juicy Haze. This delivered visually, but produced a mixed bag of aromas and flavors for our tasters, and felt harsher on the palate than the tried-and-true trendy NEIPAs we’re used to. It’s an odd rendition of the style, not quite on-trend but an interesting attempt nonetheless. Blue Point Brewing’s Hazy Bastard is Anheuser Busch InBev’s answer to the hazy IPA trend. It’s hazy, to be sure, but its aromas and flavors don’t deliver the tropical hop explosion one might expect from a take on the style with a name as aggressive as this (and a high ABV to match). Hazy Bastard leaned citrusy and boozy, with an alcohol heat that took away from the “drinkable” quality for some tasters. This is a small-batch release for the brewery, but Blue Point beer is currently distributed in 20 states, along with Washington, D.C. and select cities, so you might see this one out there. Cloudy and golden-yellow in color, Samuel Adams New England IPA nailed the tropical fruit aromas and dankness on the nose. The flavor and body lacked the “juicy” part the can label identifies, at first fruity, but fading into a more mellow IPA with a bit of a metallic finish. One taster described it as “my H&M pants” — it’s stylish and gets the job done, but doesn’t stand up to the full NEIPA quality. 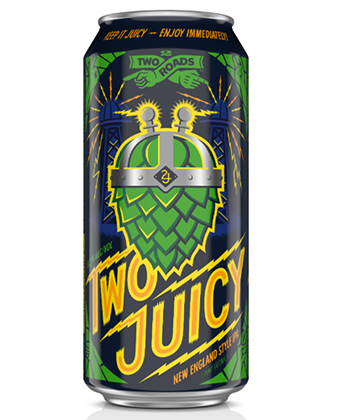 Originally called “OJ IPA,” this beer was intended as a tongue-in-cheek, one-time release for Two Roads’ Gathering at the Bines Hopcentric Beer Festival, according to famed brewmaster Phil Markowski. “Of course, it was a smash hit,” Markowski says.

So Two Roads put its own spin on the hyped style with Two Juicy, now the brewery’s No. 4 top seller. It pours a pale yellow with a cloudy sheen, unfiltered with a grain bill that includes wheat and oats, but is not quite opaque. It carries big, fruity aromas of pineapple and peach, but some bitterness, too, shying away from the extremes of other NEIPAs (and actually including balance, à la bittering hops in the boil). This one is not too juicy, but it’s just juicy enough, and it hides its 8.2 percent ABV fantastically well. Our tasters found Soft J super juicy and invigorating. The hazy, yellow-gold sunrise of a beer brings bright flavors to the forefront and is an interesting twist on the juicy IPA: Orange-strawberry-banana juice came to mind for one taster, with a candy-like aroma reminiscent of fruit snacks. Tight effervescence carries the aroma down the throat and through the nostrils, creating a pleasing spicy tingle that lingers in place of bitterness in the finish. Prismatic pours gold as a wedding band, with a bright, white head, and has a dank, resinous nose bursting with aromas of pineapple and passionfruit. A hint of bitterness takes a backseat to the nectary, citrusty goodness, but returns to the palate for a balanced finish. Effervescent, clean, and crushable, this 5.9 percent ABV IPA dry-hopped with Mosaic and Simcoe CRYO-Hops is one to chug until it’s gone, then ask for another. Leading the charge of hop-driven pale ales since its flagship Sierra Nevada Pale Ale was introduced in the 1980s, the Chico, California-based landmark brand finally joined in on the New England IPA trend with Hazy Little Thing. Although founder Ken Grossman denied this being a New England-style IPA at an event in New York City last month, it checks all the boxes: orange-gold and opaque; tropical, pineapple aroma; medium-light mouthfeel; and deliciously juicy. It’s the best widely available NEIPA we’ve tasted thus far, and we applaud Sierra Nevada’s spot-on, if hesitant, adaptation.