Calling a bottle of whiskey “cheap” can carry negative connotations, and is also subjective. For the purpose of this ranking — to determine the best inexpensive bottles of whiskey money can buy right now — we set our sights at $25 and under.

For sure, there are more than a handful of less expensive bottles that might get you decent change from a crisp Andrew Jackson. But the bottles below are whiskeys you’ll actually want to drink, enjoy, and maybe even share.

Spoiler alert: Every bottle on this list is a bourbon. By no means did we only sample bourbons; at this price point, we discovered that the best value is overwhelmingly found in the category.

Here is VinePair’s list of the best cheap whiskeys you can buy right now. 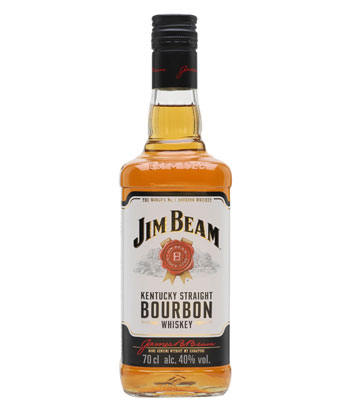 When tasted alongside similarly priced, high-volume competitors, it’s quite apparent why Jim Beam is the No.1-selling bourbon brand in the world. Its aromas shine brighter and its flavor profile is more concentrated and approachable. Admittedly, this whiskey tastes like the product of calculated engineering rather than small-batch “craftsmanship,” but that’s reflected in its price and wide availability. And on the plus side, both of these factors make this whiskey perfect for when you need to buy large quantities of bourbon (extended family get togethers, for example) and don’t want to break the bank. Average price: $15. Part of the Beam-Suntory-owned “Olds” family of whiskeys, this is a solid, overachieving cheap bourbon. Old Grand-Dad’s aromas spring out of the glass and reel you in with attractive notes of cornbread, baking spices, and dried berries. The palate skews toward fresh fruit notes and has a creamy, well-rounded texture. There’s a certain romance to the fact this bottle looks so cheap and unremarkable, but what’s inside is genuinely high- quality. Average price: $15.

(If you’re looking to splurge on a slightly pricier bottle, Old Grand-Dad Bonded and Old Grand-Dad 114 Barrel Proof, $26 and $30, should also be on your radar.) Wild Turkey 101 is the bartenders’ choice for mixing cocktails that pack a punch on a modest budget. Its high rye mash bill and high alcohol are noticeable on both the nose and palate, but the heady ABV content is muted by nuanced baking spice aromas and pronounced sweet notes on the palate. If you’re sipping it unmixed over ice, Wild Turkey’s steep proof also allows you to sip at your leisure, without worrying too much about dilution affecting flavor or alcoholic kick. Average price: $23. Heaven Hill first released its Larceny small batch bourbon in 2012. Since then, it’s won awards at a number of prestigious spirits competitions, and it’s notable for containing wheat, rather than rye, as the secondary grain in the mash bill. If you’re looking to impress friends, you can note that this is a somewhat similar foundation to Pappy Van Winkle. Accolades and geeky production facts aside, this is a toasty, honeyed bourbon with a rich mouthfeel and sweet finish. It’s one of the cheaper wheated bourbons on the market, and definitely delivers value for money. Average price: $24. A fairly recent redesign saw Four Roses’ entry-level whiskey lose its signature yellow label, but the bourbon inside remains as high-standard as ever. While it’s cheap enough to use liberally in cocktails, Four Roses holds its own when sipped neat. Its flavor profile is delicate, but it’s not lacking in depth. Aromas of toasted nuts and dried fruits are followed by smoky oak flavors, all balanced out by sweet caramel notes. This is a dependable, easy-drinking bourbon that tastes considerably more expensive than its price tag. Average price: $19. Part of the Brown-Forman portfolio, Old Forester markets itself as “America’s first bottled bourbon” and claims 150 years of history. But this bottle boasts much more than its historical value; all of our tasters agreed that Old Forester’s 86 proof was the best bottle under $25. This bourbon is intensely aromatic. The alcohol is seamlessly integrated into a stunning depth of flavors and aromas. Think: brown sugar, caramel, and candied fruits on the nose; and honey, vanilla, and hints of cedar on the palate. The finish is spiced and impressively lengthy, leaving a tingling sensation that lingers for an age. Average price: $21.