Whether you’re preparing for the holiday season, or your wine journey has brought you to the point of seeking out a “serious” bottle, when the time comes to splurge, look no further than Bordeaux.

To some, this might seem daunting. In recent years, prices of wines from the region’s first-growth properties have skyrocketed. But Bordeaux continues to offer fantastic value for money, particularly in the $50 to $100 price bracket.

Unlike other prestigious regions, such as Burgundy and Barolo, which offer undeniable quality but on relatively small scales, Bordeaux produces quality bottles in high quantities.

“Bordeaux is the largest fine wine district on earth,” Jancis Robinson and Hugh Johnson write in the recently published 8th Edition of “The World Atlas of Wine.” “Its production, about 6 million hectoliters a year, dwarfs that of all French regions except for the vast Languedoc-Roussillon.”

One of the major drawbacks of buying high-end Bordeaux is the wines’ signature tannins. This attribute makes them incredibly age-worthy, but the tannins can take years to soften, rendering younger wines almost undrinkable. For those who don’t possess roomy, climate-controlled cellars (read: almost all of us), this presents a problem.

This roundup of the best Bordeaux wines between $50 and $100 features only bottles that are ready to drink now. Each wine on this list is available in at least 20 states and delivers a drinking experience we feel exemplifies its appellation and warrants the bottle’s price.

To compile the list, VinePair tasted dozens of bottles from all the region’s fabled appellations. Many of the wines we sampled — basically anything from the 2015 vintage or younger, with one or two exceptions — remained tight, grippy, and in need of a couple more years’ aging. Others fell outside the $50 to $100 budget.

Without further ado, here are 10 of the best splurge-worthy Bordeaux wines you can actually drink now. 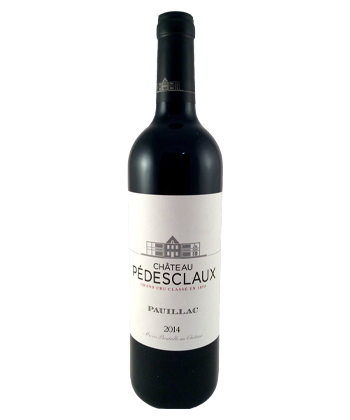 Pauillac wines are approachable at a much younger age than those from neighboring appellations, but they still serve up a feast of nuance and complexity. From a fifth-growth property that’s relatively unknown, Château Pédesclaux offers an almost-equal-parts blend of Cabernet Sauvignon and Merlot that has a fresh, dark-fruit core, plus powerful tannins. Pop this bottle at a dinner party and wait for the reaction of your dining companions after they take their first sip — you won’t be disappointed. Average price: $50. Located on the Left Bank of the Gironde river, northwest of Margaux, Moulis-en-Médoc is a go-to destination for bang for buck in Bordeaux. Château Chasse-Spleen, a property whose name translates to “chasing away the blues,” has long been regarded as one of the leading producers in the appellation. Its wines deliver on the sentiment of the name and are guaranteed to evoke a list of interesting tasting notes. Is that strawberry and vanilla candy on the nose? Is there an umami-rich hint of funky fish sauce on the palate? Buy a bottle and find out for yourself. Average price: $51. Founded in the 17th century, Château Biac has nearly 40 acres of sloping vineyards that tumble down toward the banks of the Garonne River. An outlier within the greater Bordeaux region, this producer is notable for changing the composition of its blends considerably from vintage to vintage.

VinePair tasted the 2010 and 2014. The former, a blend of 84 percent Merlot and 16 percent Cabernet Sauvignon, tastes surprisingly young, with fresh red fruit flavors and grippy tannins. The latter, which features 85 percent Merlot, 10 percent Petit Verdot, and 5 percent Cabernet Franc, has a smoother texture with better-incorporated tannins. Both will work really well with food, with the tannins in the 2010 a match for a grilled steak, while the approachability of the 2014 makes it perfect wine for winter salads. Average price: $54 Château Gloria is one of just two unclassified properties in the Saint-Julien appellation. This is not an indication of quality, and instead comes because the Château didn’t exist in 1855. Regardless, its wines are a solid representation of Saint-Julien terroir: When they’re young, they’re edgy, tannic, and not a lot of fun to be around, like a moody teenager. But with some bottle age, like this 2012 bottle, they deliver delicious notes of brambly black fruit, juniper, and rosemary. Average price: $54. La Dame de Montrose is the second wine from Château Montrose, one of 14 second-growth properties in Saint-Estephe. Unlike its Cabernet-driven first wine, La Dame is Merlot-dominant, meaning it takes years rather than decades for its tannins to soften. Well-balanced and rich in savory notes, the 2011 vintage has a seemingly endless finish that suggests it will become even better with more age. Average price: $55. Château Giscours is a third-growth property located in the Margaux appellation. Though still in its infancy, this wine shows all the hallmarks of great Margaux vintages: perfumed rose petal notes and sophisticated red fruit flavors. If you can’t find this bottle, or are looking to spend a little less, the property’s second wine, La Sirene de Giscours, offers ample elegance at around half the price. Average price: $65. The second wine from Château Rauzan-Ségla, a famed second-growth Margaux property, this bottle is really starting to hit its stride. Its tannins are well incorporated, while its wild berry flavors are ripe but refreshingly juicy. Ségla has enough texture to stand up to a char-grilled steak, but this approachable, silky red also works on its own. Average price: $65. The smallest appellation in Bordeaux, Pomerol is renowned for producing some of the world’s finest Merlot blends. Until 1935, the 15-acre plot that provides the Merlot, Cabernet Sauvignon, and Cabernet Franc grapes for Clos Beauregard was attached to a larger, still-operating property called Château Beauregard. With a much higher proportion of Merlot than its namesake, Clos Beauregard is a plump, velvety blend, with ripe fruit notes and a whiff of spearmint. Average price: $68. A spicy blend of Merlot and Cabernet Sauvignon, Château Le Moulin is named after the 19th-century windmill that adorns the Pomerol property. At close to a decade old, this bottle offers a great opportunity to experience the dried fruit and roasted nut notes that develop with age. At the same time, aromas of stewed plums and tobacco suggest there’s still plenty of life in the wine. This is classic Pomerol and proof that you’d be a fool to disregard Merlot (sorry, “Sideways” fans). Average price: $99. In 1452, during the Hundred Years’ war, the site that now houses Château Batailley’s winery and vineyards was the site of a massive battle between the French and English. One of the oldest estates in the Médoc, the fifth-growth Pauillac producer’s first vines were planted not long after the conflict ended. The 2015 vintage serves concentrated aromas of dark fruits and cassis, which are typical of the appellation. On the palate, it is simply luxurious — a drinkable perfume. For luxury, nuance, and complexity anyone can appreciate, this is your bottle. Average price: $100.