Bordeaux can mean greatness. For me, the image was reinforced not long ago when the New York wine collector George Sape invited a few dozen Bordeaux enthusiasts to a dinner at the French consulate to benefit Cité du Vin, an ambitious new world wine center (in the shape of a decanter) nearing completion in the city of Bordeaux.

Among other wines he brought from his cellar for the occasion were two storied Bordeaux: a Château Mouton Rothschild and a Château Palmer. Despite being from the challenged 1975 vintage, the wines demonstrated the longevity of the best Bordeaux — even from a less-than-ideal year — and their unique ability to intrigue us and satisfy us after so many decades.

You can begin to get a taste of this “Bordeaux-ness” in some of the “everyday” Bordeaux that are churned out of the region each year and that sell for a tiny fraction of the price of the Moutons and Palmers. And yet, despite aggressive marketing of these wines in recent years based on their quality and value, the region still fights an image among young and even not-so-young Americans as their father’s, if not their grandfather’s, Bordeaux.

No doubt, there’s a stodginess associated with Bordeaux, a formality that greets you on labels that typically depict 18th- or 19th-century chateaux, often behind tall iron gates or stone walls, with many words in French. (By contrast the Chinese, who see Bordeaux as a status symbol, love this.)

Then there are all the appellations to learn, which, depending on whether they are on the Left Bank or the Right Bank of the rivers Garonne and Dordogne for the reds, are dominated by Cabernet Sauvignon or Merlot. The main white grapes are Sauvignon Blanc, Semillon and Muscadelle, and don’t expect the labels to necessarily tell you which varieties in which proportions are in the bottle.

Yes, Bordeaux takes work. But I also believe that when it comes to relatively inexpensive wines that offer interest and complexity, Bordeaux is in a league of its own. I’ll almost always choose a bottle of $12 to $20 Bordeaux over a wine in the same price range from California or Australia or South America, a view confirmed by my recent tastings of a couple of dozen red and white Bordeaux. The other thing I like about these wines is that they have modest alcohol levels, ranging from 11.5 to 13 percent for the whites and usually not above 13.5 percent for the reds, which helps define their elegance.

If there’s an issue it’s that few of these wines have wide circulation. The good news is that there is a vast number of them, so it pays to choose a handful from your wine store and decide which ones you like, then go back and try some more. Here are a few notable examples in a range of prices with at the very least modest distribution. Consistently satisfying, this vintage shows pear and tropical fruit tastes and notes of orange, vanilla and sage. It was even better the second day. (Sample) Bursting with citrus, mainly lemon and pink grapefruit, with an herb note and refreshing acidity that makes it a natural for simply prepared fish and as an easy-drinking, warmer-weather white. 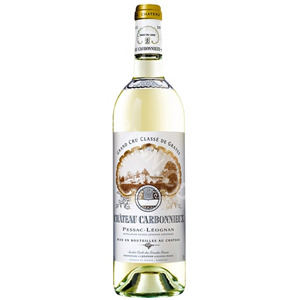 This blend of 70% Sauvignon and 30% Semillon shows impressive complexity with a core taste of green apple, exotic spice notes and a stony minerality that suggests gunflint. It’s a beautiful “grand cru” that shows off the glories of top white Bordeaux. (Sample) Excellent balance between tannin and fruit, with dark-berry tastes and hints of black licorice and cedar. Bordeaux elegance in a good value. Lovely aromas and tastes of red and dark fruits with sweet spice and cedar notes. The price makes this one a steal. Made from organic grapes, shows impressive complexity with blackberry and cassis tastes with a meat note and touches of eucalyptus, menthol and minerals. (Sample)