Take the IPA and (quite literally) turn up the hop volume, and you get what is perhaps the most uniquely American beer style: double IPA.

Vinnie Cilurzo, co-owner of the Russian River Brewing Company in Santa Rosa, Calif., is generally credited with inventing double IPA, also known as imperial IPA, in 1994, while working on the first beer for his Blind Pig Brewery. The industry-wide boom he would ignite from producing his aptly named Inaugural Ale wasn’t entirely intentional.

To quell his concerns, Cilurzo decided to take his existing IPA recipe and double the amount of hops. Yes, double. “I figured that if there were any off flavors in the Inaugural Ale, at least there would be enough hops to help mask them,” he said.

While he recently, lightheartedly, likened the taste of this experiment in extreme brewing — which, influenced by his winemaking background, also included a year of aging on American oak chips — to “licking the rust off a tin can,” Cilurzo would undoubtedly secure his position in the pantheon of hoppy beer in 2000 with the creation of Pliny the Elder. The dry, piney, intensely bitter double IPA remains Russian River’s bestselling brew more than 20 years later and, even as the category has evolved and a number of subcategories have developed, it’s still regarded as a premier example, currently ranked No. 2 on BeerAdvocate’s Top 100 list. (What holds the top spot? Its stronger sibling, the Pliny the Younger triple IPA.)

Quite simply, double IPAs raise the hop concentration and alcohol content of a standard IPA. That said, not all are created equal. So, we asked 14 brewers across the country (including Cilurzo himself) to tell us about their favorites. Here’s what they had to say. “Sean Lawson and I have been longtime industry friends and I have a great deal of respect for the beers he brews. I particularly enjoy his IPAs. Double Sunshine is so bright in hop aroma and flavor with a crisp, dry finish. The hop character in this beer is so fresh, clean, and on point with no rough edges. In 2019 Natalie [Cilurzo, co-owner and president of Russian River] and I were in Vermont pouring at Hill Farmstead’s Festival of Farmhouse Ales, and this meant we had to make a stop at Lawson’s. We were lucky enough to catch Sean and his wife, Karen, and spend a little time with them. And, of course, drink a fresh glass of Double Sunshine!” —Vinnie Cilurzo, Co-owner and Brewer, Russian River Brewing Company, Santa Rosa, Calif. “Hill Farmstead’s Society & Solitude #4 was a beer that opened my eyes to what a really well-balanced double IPA could be. The first time I had it was in 2016 when my wife and I went on a trip to Burlington, Vt., to do research for opening our own brewery, and I was in awe of that beer. Beautiful hop flavors paired with a low level of bitterness and a very light malt presence makes it damn near perfect to me. We’ve always respected the beers coming out of Hill, and this one really does it for me.” —Jeff Mannion, Owner and Brewer, Unified Beerworks, Malta, N.Y. “Cushwa has recently been getting some much-deserved love for its hazy IPAs, and for good reason. As much as people muss and fuss with new hop varieties and products, it’s really hard to beat Citra, and the Maryland brewery’s Face Chop was an all-Citra double IPA that perfectly showcased the mellow, tropical bouquet of one of the best standalone hop varieties.” —Jake Endres, Founder and Owner, Crooked Run Brewing, Leesburg, Va. “My favorite flavor combination for hoppy beers is a tropical burst balanced with a classic piney note. Stone’s Ruination 2.0, the first year-round brewed-and-bottled West Coast double IPA, offers just that, perfectly hopped to my taste. Even though it’s big at 8.5 percent ABV, it’s not overly malty-sweet. Those hops really shine in this beer, and they should since it’s billed as a ‘liquid poem to the glory of the hop!’” —Hannah Ison, Production Manager, Zeroday Brewing Co., Harrisburg, Pa. 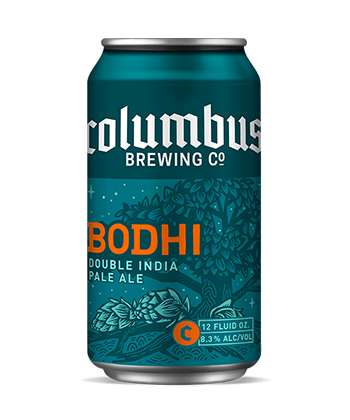 “This is a tough one. I’ve been around long enough to have been a judge at the very first Double IPA Festival at The Bistro in Hayward, Calif., in 2001. Many of the hundreds that I’ve tried have been great, but one really stands out. Five years ago, we were getting ready to install our first brewhouse at Industrial Arts and we traveled to visit our pals at Columbus Brewing, who had recently put a similar kit online. After a long day talking shop and eating donuts and chili dogs, we hit the town. The spot we went was pouring pints of their DIPA, Bodhi. This beer is a near-perfect expression of the Citra variety, and drinks like it’s half as strong as it is. It’s a testament to how hard owner Eric Bean and his team work, from hop selection all the way through packaging. Extra points for being named after everyone’s favorite Patrick Swayze character too. Their beer doesn’t get outside of Ohio very often, but those that know, know.” —Jeff O’Neil, Founder and Owner, Industrial Arts Brewing Company, Garnerville, N.Y. “Call me old-fashioned, but the hype of getting a Pliny the Elder still resonates with my inner being. The first time I had it I was in Denver for the Great American Beer Festival and it was in a liquor store, being sold one per person. I don’t think I’ve been more excited about a hoppy beer. I literally walked in the door of our Airbnb and stared at it like it was a nugget of gold. From the first piney, pungently hoppy sip, I was forever changed and forever seeking this flavor again. Russian River is perfect, in my opinion, from hoppy beers to its funky program.” —Tyler Keith Stewart, Brewer, Perennial Artisanal Ales, St. Louis “New England Brewing’s G-Bot double IPA has been around for more than a decade now, and remains a personal favorite. G-Bot is one of those beers that is just so perfectly designed and executed. It strikes a delicious balance among a lightly toasted malt backbone, a bracing but rounded bitterness, and a warming 8.5 percent ABV. The hop character represents all the best characteristics of American hops: resinous pine, citrus, and grapefruit pith. With so many IPAs being made to the extreme these days it‘s refreshing to drink a beer that is balanced but will still smack you in the face with fresh hop character.” —John Rehm, Director of Brewing Operations, Two Roads Brewing Company, Stratford, Conn. 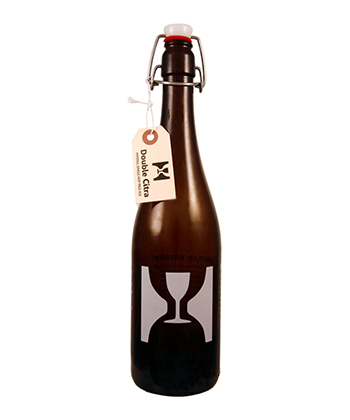 “Hill Farmstead’s Double Citra is one of the best showcases of Citra hops. I remember opening a growler of Double Citra about two years ago with a few friends and was blown away how ridiculous the aroma was. It was like sticking your face in a bag of hops. Founder Shaun Hill does a great job of not over-hopping this double IPA. It’s super clean and simple, letting those hops shine.” —Codee Carlisle, Cellarman, Tree House Brewing Company, Monson, Mass. “I will never forget my first time having Ninja vs. Unicorn, by Pipeworks. While working in fine dining, I would spend my spare time scouring craft-beer stores in search of the latest and greatest IPAs. I was drawn to Ninja vs. Unicorn because of the epic battle unfolding on the label. But I quickly found out the real magic was the liquid inside. Upon opening one my nose was melted off by the most intense hop aroma I had experienced in my life at that point. There‘s a balance that‘s struck between malt and hops that is elegantly aggressive. Like an iron fist wrapped in a velvet glove. I still love this beer and anytime I have it I recount my first sip and the impact it had on me.” —Trevor Rose-Hamblin, Co-founder and Head Brewer, Old Irving Brewing Co., Chicago “Out of the myriad of beers Firestone Walker has produced, only one reigns supreme in my eyes. It holds a special place in my heart, as it’s the one that got me into craft beer. Double Jack showcases everything I want in a West Coast double IPA. It’s dank citrusy aroma, it’s ripe, juicy peach and mango flavors, and it’s well-balanced malt backbone that really lets those hops shine. Double Jack is a dangerously smooth beer, very crushable. I’d recommend it to anyone.” —Rex Rexroat, Lead Brewer, Ferndale Project, Ferndale, Mich. “I stumbled upon my favorite double IPA while traveling through Ireland with my father in 2015. Galway Bay Brewery in Galway, Ireland, brews a monster of a double IPA called Of Foam and Fury. Bright aromas of tangerine, sappy pine, and melon fruitiness. Bittersweet balance with great hop complexity.” —Matt Cole, Co-founder and Brewmaster, Fat Head’s Brewery, Middleburg Heights, Ohio “Maine Beer Company’s Second Dinner is fantastic, being approachable without sacrificing complexity. In a world of sweeter, thicker hoppy beers, it’s refreshing to have a beer that balances fruity and dank, bridging the gap between new and old. It’s too often that IPAs, especially imperial, push drinkability down the totem pole in favor of flavor intensity. But Maine always seems to walk that balance beam expertly, and this beer is no exception.” —Sean Sasscer, Brewing Director, Cigar City Brewing, Tampa, Fla. “It was 2006 and I had just moved from Atlanta to Eugene, Ore., and I went out to Jackalope Lounge to shoot pool with some friends. I ordered Ninkasi’s Tricerahops and it was amazing; so smooth yet punchy and bursting with floral hop flavor. It was different than anything I had tried on the East Coast and I couldn’t get enough.” —Chase Medlin, Owner and Brewer, Contrast Artisan Ales, Chamblee, Ga. “I was going to say Pliny the Elder, which is still the classic that I judge all others against. But after having Pliny For President this past year, I may have to update my preference. Russian River describes it as a double-dry-hopped version with a couple of new hop varieties added, and it’s just enough of a modern update with lots of citrus and bright stone fruit flavor while still giving you the classic dry, piney profile that makes the original Pliny such a flavorful and drinkable double IPA.” —Sam Tierney, Brewing Manager, Firestone Walker Brewing Company – The Propagator, Marina Del Rey, Calif.