For years, outdoor enthusiasts had few beverage choices to take into nature. Glass wine and liquor bottles — too heavy and too breakable for adventurers — were often left home. And until the start of the 21st century, the most suitable containers, aluminum cans and bag-in-box wine, were often filled with poor options. Sure, there were hip flasks and bottom-shelf, shot-sized plastic bottles displayed on liquor store countertops, but little else.

When we entered the new millennium, Oskar Blues, like all craft brewers, packaged its beer only in bottles. Canned beer was synonymous with what large national companies like Coors and Budweiser were putting out.

Packing a quality craft beer to enjoy after a long bike ride or in the middle of back-country skiing became an option in 2002, when Dale Katechis, founder of Oskar Blues, received a spam fax message from a company selling canning machinery.

“At first, he laughed it off,” says Aaron Baker, senior marketing manager at Oskar Blues. “But he’s a big outdoor enthusiast … and it was just practical for Dale and the people he hung out with [to put beer in cans]. The can is not only more portable and recyclable, it’s better for the beer.”

To reduce oxidation, keep the light off his products, and to make something portable and less fragile for the trails, Katechis took an enormous risk. In 2002, Oskar Blues became the first major craft brewery to can and brew under one roof. It was a major success for the company, a win for beer-drinking outdoor adventurers, and an industry-defining event. In 2020, according to the National Beer Wholesalers Association, canned beer made up more than two-thirds of the retail market nationwide. 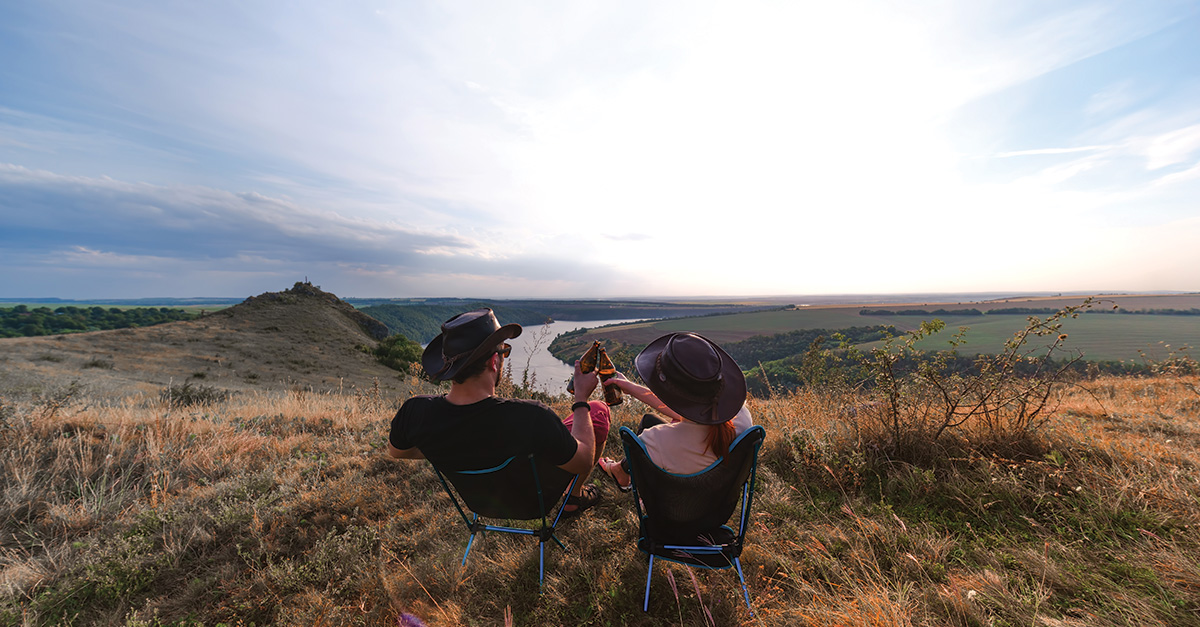 Since the craft industry switched to cans, there have been few other attempts to make beer more portable for outdoor enthusiasts. Pat’s Backcountry Beer came to market in 2008 as a concentrate and required a small carbonator to reconstitute the beer. The company, however, scrapped small-scale concentrates and pivoted only a few years later. So to this day, can remains king for hikers concerned with portability, for campers who want to keep beers cold in a garbage bag, tied to a tree, and for rafters whose beers often bang against rocks in a river. Cans have also become more environmentally friendly over the years. According to the International Aluminum Institute, the most recent generation of can ends use 10 percent less material than previous ends, reducing each can by a gram of weight. It was a bonus for hikers and backpackers counting ounces, and a plus for the industry and environment, as it cut 200,000 tons shipped each year.

There are also many more can options on the market nowadays. Eight-point-four-ounce nip cans are perfect for those looking to shave additional ounces, but still demand that sip at the peak. The 32-ounce aluminum crowler — another innovation from Oskar Blues — is designed for splitting or for yielding the least amount of material and waste for those who want a few pints in the forest. Collaborating with its longtime canning partner, Ball, Oskar Blues created Crowler Nation, a store dedicated to canning products and accessories, including a modified home canner typically used for storing vegetables and sauces. Now, the company is working on introducing its can seamer to microbreweries nationwide in order to replace heavy glass growlers.

For car campers, stainless steel growlers are also a great option, as they create zero waste. The best ones are often vacuum-insulated and keep beer cold and carbonated for about a day. While there are myriad products in this space, Stanley’s Classic Easy-Pour Growler is most affordable and delivers more or less what the more expensive models offer — though this product is not for hikers watching their pack weight.

Improved packaging and design ideas have allowed more liquor to be trekked into the great outdoors as well.

Stillhouse has created a collection of whiskeys, a bourbon, and a vodka in 100 percent stainless steel, rectangular containers that are flat enough to slip into any side pouch or fully packed backpack. Kru 82 Vodka packages its vodka in stainless-steel cylindrical containers that look like water bottles. Malibu rum offers pre-packaged cocktails in 1.75-liter flexible pouches with leak-proof dispenser nozzles. For car campers who crave frozen cocktails, GSI Outdoors has a hand-cranked blender to make Margaritas. (Fortunately, car campers can justify packing it in, as it’s useful for making meals, too.) For those who require the most functionality from their outdoor gear, VSSL transformed the handle of a flashlight into a flask, creating a highly useful flask-light.

For adventuring wine drinkers, wine packaging has always created the greatest nuisance. Bags without their boxes were puncturable, and until recently, the juice inside was typically low-quality. Glass is impractical for the trails and too much of a greenhouse-gas emitter for the environmentally conscious. (According to the California Sustainable Winegrowing Alliance, the packaging and transporting of glass bottles — and all the empty space between those awkwardly shaped containers — contributes to more than half the carbon footprint that the wine industry creates as the grapes trudge from vine to shelf.)

Today, however, the wine category has the most packaging options for adventurers, offering everything from canned wine to pre-packaged, lightweight, shatterproof, stacked wine cups from StackTek — allowing hikers to snap off two cups, for instance, instead of lugging an entire bottle up to the peak. Outdoor outfitter brand Vapur has also created a portable packaging line called After Hours, specifically designed for wine and spirits. While the bottles are made of the same material as its water bottles, After Hours does incorporate slight design changes to bring the ambience of wine cliffside, even without that ostensibly elegant glass.

Wanting to get rid of these glass bottles was Bandit Wines’ raison d’être. Prior to its formation in 2003, one of Bandit’s co-founders was befuddled when he found an unsophisticated tower of small wine boxes stacked up in a grocery store in Italy. But when he returned the next day, he noticed that the tower had been halved. The in-demand boxes were Tetra Paks — cartons made from sustainably harvested trees. When the Bandit team discovered that the price of a Tetra Pak was equivalent to that of a wine cork, they decided that it was a no-brainer to eliminate the financial and environmental costs of the bottle and market their lightweight wines to outdoor adventurers.

Like Oskar Blues, Bandit Wine’s largest challenge was convincing the customer that wine in a box could be good. “It took decades for the screw cap to be accepted,” says Bandit Wines co-founder Charles Bieler. But with a new generation of consumers who are more environmentally conscious, Bieler says, “people are starting to recognize quality and value based on their own tastes.”

The brand isn’t aiming to produce the world’s best wine — just quality wines that can be enjoyed sustainably in nature. “We’re not defining what Cabernet or Pinot Grigio can be,” Bieler says. But Bandit is definitely defining where it can go.

Instead of a rectangular prism, Bandit Wines are packaged in eight-sided cartons. This eliminates most of the empty space in transporting the wines when compared to cylindrical wine bottles, mimics the look of a typical wine bottle better than its rectangular cousin, and prevents crimped corners when stored in elastic bands on the side of a backpack. Unlike bagged wine, Tetra Paks, which have thin aluminum linings inside, are less likely to be punctured and have shelf lives of up to 18 months. Each of Bandit’s wines also features a different national park design to match adventurers’ views. As an added bonus, Bandit Wines donates 1 percent of its revenue to eco-minded non-profits.