Whether you’re an avid Scotch drinker or a dedicated television watcher, you’ve probably heard of Dewar’s. The Perth, Scotland-based whisky brand has been around since 1846 and has since become a staple on bar carts around the globe.

The beloved Scotch may be a worldwide household name, but there’s always more to learn. Read on for 10 facts that every whisky lover should know about Dewar’s.

The story starts with family.

While the brand is no longer run by the Dewar family, it is proudly headed by master blender Stephanie MacLeod, who has been with Dewar’s for almost 25 years.

For Dewar’s, age is more than just a number.

The brand ages its Scotch twice — once before blending, and once after. Dewar’s claims that this double-aging process allows for a more balanced whisky.

Ranking as one of the nation’s top-selling whisky brands overall, Dewar’s has captured the hearts and palates of Americans. Dewar’s can even count the VinePair tasting team among its fans, as we ranked Dewar’s not once, but twice in our list of the best Scotch whiskies in 2019.

It claims to have pioneered one of America’s favorite libations.

Legend has it that Tommy Dewar loved traveling almost as much as he loved whisky. The brand’s co-founder even wrote a book about his “Ramble Round the Globe,” in which he claims to have invented the original Highball — made with whisky, soda, and ice — while visiting New York.

Dewar’s goes for the gold.

Dewar’s proclaims itself the world’s most awarded blended Scotch whisky — gaining thousands of awards to date and medaling three times in the 2019 International Whisky Competition.

Dewar’s found its way into the White House.

Tommy Dewar loved his family’s Scotch so much that he decided then-U.S. president Benjamin Harrison would, too. In 1891, Dewar reportedly sent an 18-gallon cask of Dewar’s as a gift to the White House at the request of Scottish-American industrialist Andrew Carnegie. This action sparkled anger in American whiskey brands, which supposedly resented the president’s decision to consume “foreign whisky.”

It has the Queen’s stamp of approval.

On yet another one of his adventures, Tommy stopped in the U.K. in 1893 and was able to convince Queen Victoria to grant a royal warrant to Dewar’s. The brand was the first blended Scotch to receive such an endorsement.

Dewar’s can thank bizarre ads for its popularity.

Anyone who loves TV knows Dewar’s. That’s because in 2013, the brand released a series of strange TV ads featuring “Mallrats” actress Claire Forlani — as well as her attempt at a Scottish accent, which garnered both confusion and criticism among viewers.

Dewar’s logo is a take on the Celtic truth knot, also known as a “love knot.” It is one of the oldest Celtic symbols, representing strength and longevity. The Dewar family took this symbol’s meaning to the next level, incorporating three Ds for the three Dewars who founded the brand — likely in the hopes that their family name would live on in the brand. Thanks to Dewar’s millions of fans, the Dewar family’s legacy has, indeed, endured.

There’s a Dewar’s Scotch for everyone.

Whether you’re a big spender, or an imbiber with a more modest budget, Dewar’s has something at every price point, with 10 Scotch varieties ranging from $20 to over $200. 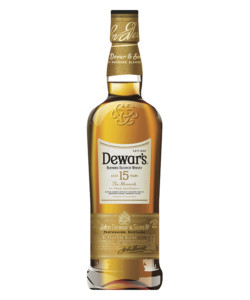