When it comes to Scotch, some of the finest in the world can all be traced back to one small island just off the coast of Scotland’s mainland — Islay. Islay Scotch is favored among many whisky drinkers for its distinctive peaty and smoky flavors, and within the category, Ardbeg’s offerings are some of the most highly sought after in the world. Now widely regarded as one of the finest whiskys in the world, Ardbeg’s history is rife with tumult, leading to a cult-like following of whisky connoisseurs who’ve over the years proven they’ll do anything to ensure their beloved distillery never has to cease its operations.

As opposed to other Islay Scotches that focus on the influence of sea breezes on their distillates, Ardbeg leans heavily into the peat spices present in its malts. In fact, the brand works with malts that have been peated to between 50 and 55 phenol parts per million (PPM) — the highest of any Islay distillery. Phenol PPM measures how much peat remains in the barley once the malting process is complete — the high amounts in Ardbeg lead to its more intense notes of smoke and peat. Now that you know the basics, here are 10 more things you should know about Scotland’s iconic Ardbeg distillery.

Ardbeg was officially founded in 1815 by John MacDougall, who established the distillery as a legitimate commercial operation. However, as was the case with many of Scotland’s distilleries at the time, Ardbeg had already been producing whisky for several years. Prior to acquiring a license, Ardbeg was a part of the illicit distilling business in Scotland, and though there are no records to corroborate this fact as it was illegal at the time, it is speculated that Ardbeg had been producing Scotch since as early as 1794.

The distillery was once run by two of Scotland’s first female distillers.

Despite the distillery shuffling hands to Thomas Buchanan, a Glasgow spirit merchant, in 1838, Ardbeg continued to be managed by Alexander MacDougall — John’s son — until his death in 1853, at which point control was handed to Colin Hay and the MacDougall sisters, Flora and Margaret. The two women took over operations and are widely believed to be among the first — if not the very first — female distillers in Scotland. The distillery remained partially women-run and -operated until Margaret’s death in 1865, after which Colin Hay became the sole owner of Ardbeg.

Ardbeg was once completely self-sufficient.

From Ardbeg’s first days as a legitimate distillery in 1815 until 1974, it was completely self-sufficient, meaning all products used to distill Ardbeg’s single malts were produced right there on Ardbeg’s own property. Prior to 1974, all peated malt used in Ardbeg’s whisky was sourced entirely on-site from a bog just two miles down the road from the distillery itself. However, by the ‘70s, demand for peated whisky had grown so much that the distillery had no choice but to begin sourcing some peat from Port Ellen, Islay’s largest town — a choice many whisky lovers viewed as the end of an era.

The distillery was a victim of the Whisky Loch.

Despite demand being nearly out of control in the ‘60s and ‘70s, the 1980s saw a sharp reversal in Scotch demand, leading to an extreme surplus of supply and dire economic times for many distilleries. Known as the “Whisky Loch,” the 1980s were marked by a number of distilleries closing their doors due to an overstock of booze they were unable to sell. Among these distilleries was Ardbeg, which closed its doors from 1981 until 1989 when it was purchased by Allied Distillers, which also owns fellow Islay-based brand Laphroaig. Upon reopening, Ardbeg was only functional for two months out of the year. Apart from those two months used for production, the distillery served mostly as a means of housing spare parts for Laphroaig’s distillery. In 1996, the distillery had fallen into disrepair and was shuttered once again before being put on the market for sale.

In 1997, Glenmorangie sought to return Ardbeg to its former glory.

Ardbeg did not have to close its doors for long before it was purchased by Glenmorangie for 7 million pounds (around $8.3 million) in 1997 with the goal of returning the distillery to its prime. Envisioning a use for the surplus whisky still left over from the 1980s, Ardbeg’s new owners knew they could benefit from the distillates that had spent the last few years aging at the abandoned distillery. As such, Ardbeg’s first release after re-establishment was a 17-Year-Old Single Malt Scotch Whisky, which was released in limited quantities from 1997 to 2004. Over the course of the early aughts, Ardbeg released a number of limited edition Scotches, including 2001’s 25-Year-Old Lord of the Isles. The two bottlings are now among the distillery’s most highly sought after distillates.

It took over a decade for Ardbeg to release its first year-round bottling.

Despite reopening in 1997 and being met with some success, it took another four years before the distillery was able to maintain operations year-round, and it wasn’t for another year that Ardbeg would release its first consistently available bottle. In 2008, the brand released Ardbeg Ten Years Old, widely regarded as the peatiest, smokiest, single malt in the world.

Some Ardbeg bottles are out of this world — literally.

In 2011, Ardbeg launched vials of its whisky into space to observe how microgravity climates impact the maturation process. Invited by U.S.-based research company NanoRacks, the experiment was designed to observe how differences in gravity impact interactions between the compounds in whisky and charred oak during the aging process. The whisky — which was housed on the International Space Station — orbited Earth 15 times each day before it was sent back to Earth in September 2014. Once back on solid ground, the whisky that was aged in space was compared with the same distillate aged in normal gravity conditions.

Where the control sample was notable for its woody aroma with hints of cedar, sweet smoke, and balsamic vinegar, the nose on the space-aged sample was marketed by its intense notes of antiseptic smoke, rubber, and slight perfume. Further, the palates of the two distillates were noticeably different. Flavors from Earth-aged Ardbeg were mostly dominated by wood and balsamic notes with some fruit shining through, while the zero gravity-aged Ardbeg was much more fruit-forward with flavors of smoked prune and raisin alongside sugared plums and cherries.

Ardbeg recently set a record for the most expensive cask of Scotch ever sold.

In July 2022, Ardbeg shattered the previous record for most expensive cask of Scotch ever sold when a barrel of its Scotch sold for 16 million pounds (almost $19 million). Regarded as a “remarkable piece of liquid history,” Cask Strength No. 3 was distilled and put into barrel in 1975 where it was first aged in two separate casks — bourbon and oloroso sherry — before the spirit was combined to age further in sherry casks in 2014. As many of Ardbeg’s spirits from the 1970s were used in blends with other distillates, there are few in existence that have been left to age this long, surely contributing to the cask’s extreme price point.

The Ardbeg Committee was founded on Jan. 1, 2000 with the goal of ensuring Ardbeg never again has to halt production and close its doors. The committee, which is a fan club of sorts and completely free for members to join, aims to share as much knowledge about Ardbeg as possible with as wide an audience as possible. Fans of Ardbeg from all over the world are welcome to join the community, which grants members access to exclusive content and exclusive, once yearly, committee-only releases.

In 2018, the distillery announced plans to double its production capacity — a goal it’s already surpassed.

In February 2018, in response to unprecedented surging demand, the Islay distillery announced its plans to expand operations to double production capacity. To do so, the distillery installed two new stills — bringing the number up to four — and converted an old stillhouse into new washbacks. The project was completed by late 2019 and allowed for Ardbeg’s production to increase to 2.8 million liters of whisky every year — a far cry from the annual 250,000 liters produced when the distillery first reopened in 1997. 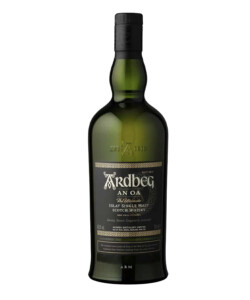 Ardbeg Corryvreckan Islay Single Malt Scotch Whisky:
Don't be intimidated by this single malt's 57.1 percent ABV content, the alcohol in this whisky weaves seamlessly into its profile. On the ... Ardbeg Uigeadail:
A non-age-statement single malt, Ardbeg delivers on its reputation as offering some of the peatiest whiskies on the market with this ...