By the early 1990s, Bob Hawke had become one of Australia’s most popular prime ministers, but back in 1954 he was just an Oxford University student trying to figure out a way to pay a college fine he couldn’t afford. A Rhodes Scholar in University College, Hawke was constantly dealing with the 900-year-old school’s quaint and ancient customs. One night, he neglected to wear his academic gown to dinner at the Great Hall — some “bastard” had borrowed his, he would later write in his 1994 memoir — and, thus, he faced a most arcane punishment from his cronies:

Young Hawke would need to drink a yard of ale, some 2 ½ pints, from an antique pewter pot, in under 25 seconds and faster than the sconcemaster — the president of the Junior Common Room — could likewise do so. If he was unable to, Hawke would not only pay for all of the drinks, he would also face a stiff monetary penalty.

“I was too broke for the fine and necessity became the mother of ingestion,” he wrote in “The Hawke Memoirs.” “I downed the contents of the pot in eleven seconds, left the sconcemaster floundering, and entered the Guinness Book of Records with the fastest time ever recorded.”

Records Were Made to Be Drunken

Just a few years earlier, in the fall of 1951, Sir Hugh Beaver, then the managing director of the Guinness Brewery, was attending a shooting party in the countryside. There, he got into an argument with fellow hunters as to what was Europe’s fastest game bird. Unfortunately, no one could find the answer as there was no reference that included such arcane facts. Soon, Beaver was thinking he might like to publish such a book, one that could help settle these sorts of bar bets. So he teamed up with twin brothers Ross and Norris McWhirter, expert fact-finders, to put one together.

“The Guinness Book of Records” was first published on Aug. 27, 1955, as a promotional item the brewery originally offered as a freebie at pubs. In the 198 pages in that first edition are around 4,000 records in 12 categories, including The Business World, Accidents and Disasters, Sport, and The Animal Kingdom, which cited the British Friesian cow responsible for the highest lifetime milk yield (325,130 pounds over 17 years).

There, under Human Achievements, were also two drinking records taking up a mere two lines:

If those listings made any waves in popular culture, they certainly weren’t reported on by the press. But it seems that British college students, at least, were paying attention. “I suspect it’s because Ross and Norris McWhirter also studied at Oxford University and had an interest in records set by fellow alumni,” says Martyn Tovey of the invaluable Guinness Record Book Collecting website, who greatly aided in my research.

By 1956, the book had added one more drinking record, noting that “The Oxford University ‘sconce’ record stood at 12.0 seconds for 2½ pints of beer set by the Australian R. Hawke (University College) in 1955.”

That was, of course, our man Bob Hawke, and though the dates and times were slightly different than his ale-addled recollections over the years, the story certainly was not apocryphal like one might have expected of a politician’s braggadocio.

Hawke’s record would remain in the third edition published in 1958, despite the editors adding a new fastest time for draining a “yard of ale”: 55 seconds by a Royal Air Force corporal in 1948. In the fourth edition the yard record was again updated, citing Englishman Peter Edwards as having polished one off in a mere 10 seconds flat. By 1961, Leo Williams, yet another college student, at the University of Queensland, had drained 2.6 pints of beer in 7.9 seconds.

By now, some competition was developing, and the drinking records were getting more and more outrageous, nearly impossible to believe through today’s more sober lens.

Meanwhile, “The Guinness Book,” as it became known in shorthand, was becoming such a hit, the brewery’s publishing arm had begun charging for it. By 1964, the company had sold 1 million copies and it was a regular on best-seller lists. It had spread to American editions as well, initially published in 1956 under the title “The Guinness Book of Superlatives.”

Not a country that likes to be beaten in any feat of recklessness, America finally made its first appearance in the 1964 edition. J. H. Cochrane put back 2 liters of beer in 11 seconds at Harry’s New York Bar in Paris. Sadly, in that same edition, Hawke was finally bumped from his earliest brush with fame, with a new Oxford University sconce record of 9.3 seconds now having been accomplished by one M. R. O. Walker.

In 1966’s 13th edition, over a decade after the book first debuted, though Guinness would continue to include drinking records — with the yard of ale chug down to a miniscule 6 ½  — for the first time the book also offered a terse warning:

“From a medical point of view, record attempts must be regarded as extremely inadvisable.”

Upside Down and Inadvisable

And yet, records continued to be set, debaucherous displays of drinking taken to new heights. Or perhaps depths. A new drinking category, “Beer Upsidedown,” was added in 1969, with 18-year-old Graham Greenwood knocking back 1 ½ pints while held inverted by his feet. A World Beer Drinking Championship was introduced around this time as well, leading to Lionel Tuft setting a new record for consuming 1 gallon in 7 minutes 33 seconds.

By the 1972 edition of the book, the drinking records were becoming almost unfathomable, with George Purvis having been credited for downing a single pint in 1.36 seconds. At that point, however, an entire paragraph caveat would introduce the drinking records that, though a bit rationalizing, was the first time the Guinness Book sets some limits on itself:

“While no healthy person has been reported to have succumbed in any contest for eating or drinking non-alcoholic or non-toxic drinks, such attempts, from a medical point of view, must be regarded as extremely inadvisable, particularly among young people. Guinness Superlatives will not list any records involving the consumption of more than 2 litres (3.52 Imperial pints) of beer nor any at all involving spirits.”

It didn’t seem to matter; people were still clearly interested in continuing to break these records. Like Englishman Peter G. Dowdeswell, who burst onto the scene in the 1975 edition, breaking the records in literally all the beer-drinking categories:

Dowdeswell would instantly become a bit of a household name across the pond, obtaining tons of press, including an entire short film “Champions,” made in 1979, about his attempts to hold every single eating and drinking record possible.

He would continue to dine out on his drinking prowess throughout the rest of his life as he extended his records and attempted crazy new feats. In fact, there’s a remarkable video from 2010 of a then 70-year-old Dowdeswell bragging about his pint speed record (2/5 of a second!) before then impressing fans by polishing off a yard of ale (4 ½ pints) in mere seconds.

Unfortunately, Dowdeswell had to retire from competitive drinking the following year. While trying to break the record for fastest pint drunk upside down, the two men holding his legs accidentally dropped him on his back. 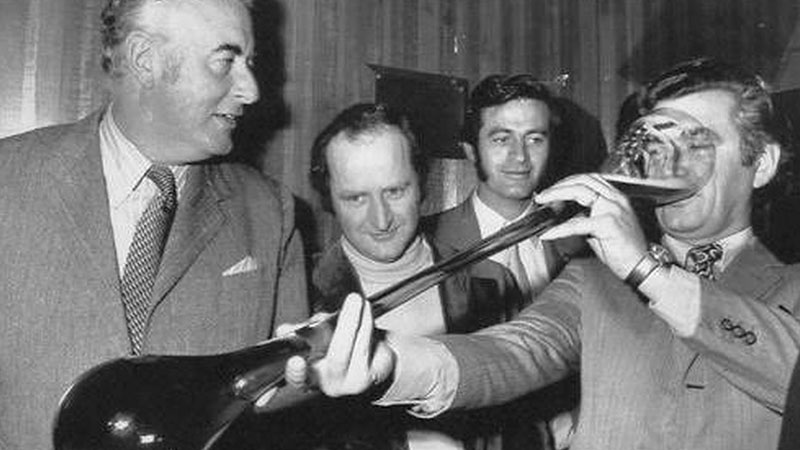 A Guinness Book Without Drinking?

Maybe the records became too hard to break, maybe college kids suddenly had better things to do with their time, or maybe this next generation simply didn’t have any desire to hold the record for drinking two pints upside down (6.4 seconds).

But from 1978 through 1983, no new drinking records were added to Guinness Book editions. For the rest of the 1980s, 1990s, and into the 2000s, only Dowdeswell and his top competitor, a retired marine colonel named Steven Petrosino, would appear in the drinking section of the book.

In 2004, with little fanfare, the Guinness World Records (as it officially became known in 1999) unceremoniously quit publishing any and all drinking records.

“Guinness World Records no longer considers applications for records involving the rapid consumption of alcohol,” its official site notes today, along with a few dozen other records no longer accepted, like heaviest pets and most freckles.

The publishers clearly saw where the world was headed, as we entered a new millennium of MADD and DARE, “sober curiosity,” Dry Januarys, and non-alcohol libations. To celebrate hardcore drinking was simply uncouth, if not unethical in an era when so many college students were dying from binge drinking and frat hazing incidents. It was claimed Guinness was also concerned about potential litigation.

Sure, this change wouldn’t please everyone — “bowed to neo-puritanical pressure” wrote esteemed British beer journalist Pete Brown of the change in his 2008 book “Three Sheets to the Wind” — but it was probably the right decision.

Today, Guinness World Records are owned by the Jim Pattison Group and I’d wager young people are as unaware that it was once related to the Irish stout-making factory as they are unaware that Michelin stars spawned from a tire company.

Yet, our collective admiration for drinking records nevertheless endures.

While it’s easy to laugh at Dowdeswell’s foolish antics, those antics raised a reported £4.5 million for disabled children over the years and allowed him to continue appearing on TV shows like “Late Night with David Letterman” well into old age. Likewise, Greenwood’s seemingly absurd upside-down pint record would lead to fellow students at University College in Galway attempting the feat in order to raise money for charity.

Drinking massive quantities of alcohol or chugging beer at an incredible speed will always capture people’s imagination. It’s just how it is.

As for Hawke, though he is credited with globalizing the Australian economy, establishing nationwide universal health, conserving the local environment, building strong relationships with the U.S. and China, and even introducing Australia’s first national anthem, his Guinness World Record is currently the third line in his lengthy Wikipedia biography. And, though he died in 2019, he would have probably told you that it rightly should be.

As Hawke once noted:

“This [drinking] feat was to endear me to some of my fellow Australians more than anything else I ever achieved.”