Feta and goat cheese, two of the world’s most popular cheeses, may seem very similar on first glance. White, creamy, and the perfect complement to a wide array of foods, the cheeses’ similarities diverge when considering their respective milk varieties and production styles.

The increase in popularity of these two iconic cheeses in the U.S. has led to an explosion of brands found even in your average grocery store. Keep reading to learn more about how feta cheese and goat cheese compare.

Feta, which originated in Greece, has been a staple of Mediterranean diets for eons. Named in the 17th century, the word “feta” means “slice” in Greek and likely refers to how the cheese was cut for storage in barrels. However, feta’s true origins are unknown. Although the oldest known reference of a sheep’s milk cheese appeared in Homer’s legendary 8th century B.C. poem “The Odyssey,” it’s probable that humans had been producing something similar long before.

The proliferation of goats as a livestock animal resulted in the production of goat cheese, or chèvre, by multiple cultures for centuries. The origin of chèvre (French for “goat”) can be traced back to the 8th century in France. According to Culture Magazine, after the Moors retreated from France following the Battle of Tours, they left behind their goats. As the magazine explains, “French farmers in the Loire River Valley started tending the goats, made cheese from their milk, and over a millennium built up a veritable chèvre empire.” 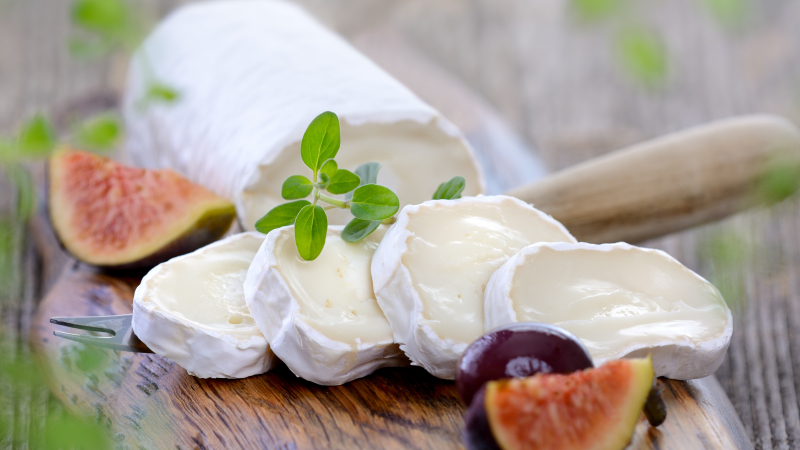 Shannon McCracken, the cheesemonger and general manager at Montrose Cheese & Wine in Houston, notes that understanding the differences between goat and feta cheese requires the consideration of a number of different factors. While “chèvre and feta are both in the ‘fresh’ cheese category,” she adds that you have to determine the particular style of goat cheese and the milk type used in the feta. “Is it a fresh goat cheese or an aged goat cheese? If we are talking about a fresh goat cheese, or chèvre, then the main difference would be that feta is usually submerged in some kind of brine and chèvre is not,” she says.

While goat’s milk is used in a range of cheese styles, the style of chèvre most often found in the U.S. is a soft, fresh version. Made by adding rennet and a bacteria culture to warmed goat’s milk, the resulting curds are then separated from the whey and strained until a creamy consistency is achieved. The cheese is sold in a log shape, and is often mixed with a variety of herbs or spices.

Similar to Champagne or Prosecco, feta is a Protected Designation of Origin (PDO) product in the European Union. In order to be certified, the product must follow a set of specifications, and can only be called “feta” if it comes from certain areas in Greece and uses milk from local sheep and goats.

Traditionally made from sheep’s milk, feta can also include a mixture of sheep’s milk with up to 30 percent goat’s milk. After the milk is curdled, it is strained, dry salted, and placed into containers with brine where it is left to ripen for a minimum of two months. Typically sold in block-like shapes, feta is also made in the U.S., where the EU’s labeling requirements do not apply. Known for its briny and tangy flavor, feta’s profile can vary depending on the producer, region, type of milk used, and how long it has been aged. When made entirely from sheep’s milk, feta tends to be more buttery and creamy whereas the addition of goat’s milk creates a more acidic and crumbly version. Goat cheese, on the other hand, does not have quite the saltiness that feta does. Also tart, it has a creamier mouthfeel than feta, with fresh, bright lemony notes.

Rachel Wright, the sous chef at Leon’s Full Service in Decatur, Ga., points out the differences in each cheese’s texture, comparing feta’s “firm, springy, and crumbly texture,” to the “typically smooth, softer, and more easily spread[able]” goat cheese. For her, goat cheese’s versatility makes it “great for salads, sandwiches, and charcuterie boards.”

While goat cheese may be more versatile, acting as a neutral, creamy accompaniment, feta’s pungent flavors pair with any dish that calls for a salty, briny kick.