Bartenders have been serving small batch cocktails with the French press for years. The coffee brewing tool is just one of the contemporary cocktail renaissance’s many contributions to drink culture. Now, home bartenders are also embracing this fashionable way of creating bespoke elixirs of spirits, juices, fruits, herbs, and whatever else they can scrounge up in their kitchens.

While the French press is conventionally used to separate coffee from the grounds, its use in cocktails serves a similar purpose and does so with an allure that makes it worth trying.

Why use a French press for cocktails?

The French press is a great tool to use when making cocktails for three main reasons: It has the ability to mix both hot and cold drinks; it can separate solid ingredients that were used to impart flavor into a spirit or mixture; and it does so in small batches, which is great for session drinking with others.

Its unique value proposition as it relates to mixing drinks is one that can’t be undermined, as it is pretty much the only tool that can accomplish these tasks. It’s the perfect marriage of practicality and style, and its efficiency and convenience are the forefront of its appealing attributes.

One thing to keep in mind when developing French press-friendly cocktails is that there needs to be a component of the mixture that needs to be strained (in other words, some solid ingredient or ingredients, like basil and strawberries used in a recipe below). Without some sort of fruit, nut, spice, herb, vegetable, or other ingredient that adds flavor or texture to the cocktail, serving the mix in a French press would only be for aesthetics.

Muddled drinks are one style of cocktail that works well when applied to the French press technique, because muddling involves releasing flavor from herbs, or fruits, via agitation. Think about making a Mojito, for example: Simple syrup and mint are muddled together at the bottom of the glass, then some lime juice and rum are added, before it’s topped with ice and soda water.

The mint ends up floating in the drink — which isn’t a terrible thing — but if this cocktail were scaled up, and made in a French press, the mint would be pressed to the bottom and what would be left is a delicious mixture that still has the flavor of the mint, but with a cleaner texture. (Having solid particles in fizzy drinks also makes them lose their carbonation at a faster rate, so there is an actual benefit to maintaining the quality of the cocktail as well.)

Infusions are an entire topic in and of themselves, but the main purpose of this technique is to use an ingredient (e.g. a pepper) to give new flavor, and texture, to a spirit. Some ingredients infuse spirits quicker than others — a good rule of thumb here is if it cooks down quicker, it likely infuses quicker as well.

The most important thing to remember as it relates to infusions in a French press is that alcohol is a solvent, and the higher the ABV of a mix, the quicker the spirit will pull flavor from whichever ingredient is being used. When using this method to infuse a spirit, the most crucial thing to remember to do is let the spirit and solid infuse by themselves without adding any components of the cocktail that may lower the ABV (juice, citrus, liqueurs, etc.). This will ensure that the cocktail yields the best concentration of flavor. When it comes to hot drinks, the heat will also help infuse the drink quicker, just like brewing hot coffee or tea. (Pro tip: Infusing a spirit separately ahead of time will cut down on the preparation of the French press cocktail.)

Below are three French press cocktail recipes to make at home. 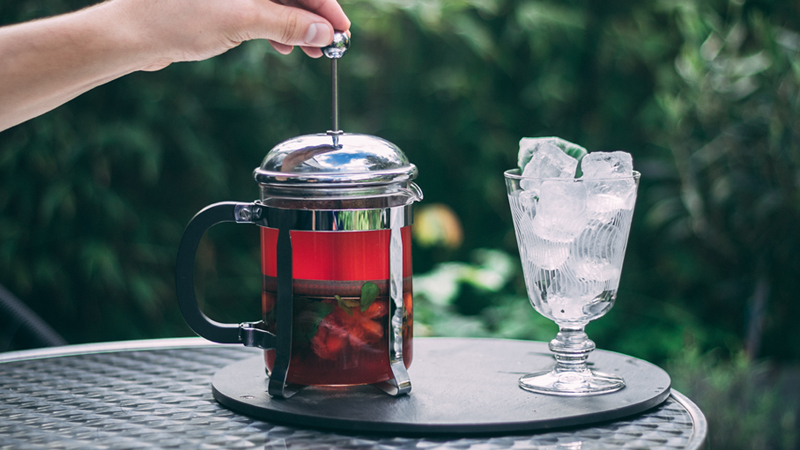 If Pizza Were a Cocktail 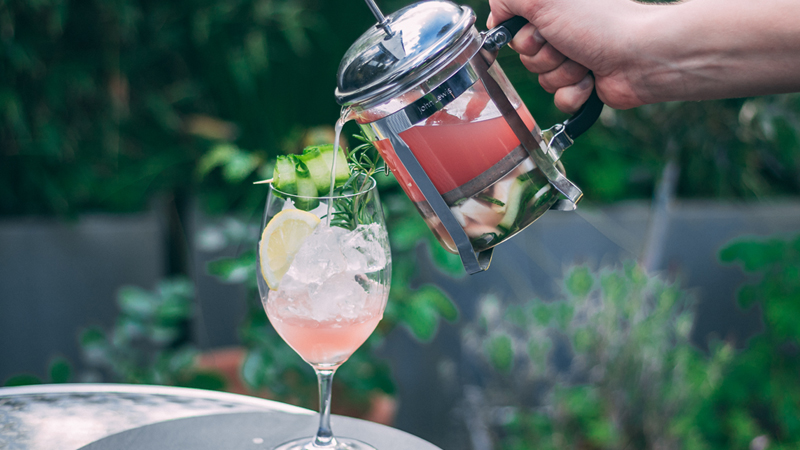