When it comes to Cognac, there is no disputing Hennessy’s “king” status. The company — which reads “modern” but is in fact 257 years young — is the largest producer of the spirit, supplying almost half of the world’s Cognac. In addition to its top sales, the brand’s image has also successfully solidified a place in pop culture through hip hop and artist collaborations.

There is no doubt that this sipping spirit is indeed an item of luxury and status, even at its most affordable price point. But the roots of Hennessy run deeper than its American cultural relevance. Founded and created by an Irishman, Hennessy Cognac kept two families in business for eight generations before merging to become part of one of the largest multinational conglomerates of luxury goods. Following the merger, the French spirit became immersed in Black culture, further solidifying its widespread appeal.

Today, Hennessy continues to evolve, leading the way in art, culture, and of course, flavor. It’s no secret why this regal brand has remained one of the world’s most beloved Cognacs. Intrigued to learn more? Here are 10 more things to know about Hennessy.

Hennessy is French by way of Ireland.

As a Cognac, Hennessy is thoroughly French –– even though the brand was founded by Irish military officer and businessman, Richard Hennessy. At the age of 19, Hennessy left Ireland and journeyed to France, where he fought under Louis XV in the War of the Austrian Succession. When his military career came to an end, Hennessy turned his attention to trade and, with the help of his uncle, founded Hennessy Cognac in 1765.

Contrary to popular confusion, Hennessy is not a whiskey but is instead a type of brandy. The term brandy refers to a spirit distilled from a fermented fruit juice, be it grape or other fruits such as apple (used to make apple brandies like Calvados). Cognac, however, is made primarily from the white grapes (Ugni Blanc, Folle Blanche, and Colombard) and by definition must come from the Cognac region of western France. Once fermented, the liquid is twice distilled before aging in French oak barrels. The oak has a subtle impact on the brandy, imparting nutty and toasty flavors to offset Cognac’s richer notes like tender fruit, vanilla, and spice.

The alphabet is your guide to Hennessy.

Standard to high-end brandies and Cognacs, Hennessy bottles feature a combination of letters to indicate the quality (and price tag) of the liquid inside. Most common is V.S., which stands for “Very Special.” Other labelings include V.S.O.P,. or “Very Special Old Pale,” and X.O., which stands for “Extra Old.” Though these indicators may appear confusing at first glance, this handy guide simplifies Cognac’s labeling and makes choosing the right bottle easier than ever.

There’s a Hennessy for every budget.

Hennessy V.S. is crafted from a blend of Cognacs aged at least two years. It has notes of soft fruit, toasted nuts, and vanilla, and costs less than $50. Its V.S.O.Ps is aged at least four years and has mature notes of fresh fruit, spice, and rich vanilla and tobacco undertones, while Hennessy’s X.O. is crafted from a blend that is aged a minimum of 10 years and has warming notes of candied fruit, chocolate, and hints of wood and pepper.

Hennessy’s fanciness dates back further than you think.

In 1971, Hennessy merged with Moët & Chandon to form Moët-Hennessy. The group later partnered with Louis Vuitton, forming the base of what would become one of the world’s largest conglomerates specializing in luxury goods. Today, LVMH is home to 75 houses with brands across various sectors such as fashion, perfumes, jewelry, and beverage.

For its 250-year anniversary, the brand released the Hennessy Richard bottle, which celebrates its founder and origin. The premium spirit is a mix of roughly 100 eaux de vie that has supple notes of nutmeg, leather, and delicate flowers. Housed in a handblown Baccarat decanter, the luxe bottle retails anywhere from $3999.99 to $4999.99.

Too much of a good thing led to a shortage.

Hennessy is a mega-brand, with control of half of the world’s Cognac production. But in 2017, the company confirmed a shortage of their prized spirit and actually had to hold back products from store shelves. As the company grew, the demand for Hennessy skyrocketed, thirstily outpacing supply.

Henny is deeply rooted in Black culture — for good reason.

Hennessy’s relationship with Black culture is much deeper than music. Sure, rapper Nas was its brand ambassador and there are countless lyrics and rap songs dedicated to the beloved Cognac, but Hennessy is rooted in Black culture because of its commitment to growing it. During a crucial time, the brand actively pursued marketing and advertising in Black magazines. It also made an effort to employ Black people in leadership roles throughout the company. In 1968, the brand made former Olympian Herb Douglas its vice president of urban market development, making him one of the first African-American VPs in corporate America.

Hennessy worked with the artist behind the Obama ‘Hope’ poster.

In 2014, Hennessy unveiled a limited edition bottle collection designed by street artist and social activist Shepard Fairey. Having previously worked with many renowned artists, including KAWS, Futura, and Os Gemeos, the collaboration with Fairey — best known for his iconic Obama ‘Hope’ poster — seemed more than fitting. For his bottle design, the contemporary American artist incorporated elements of the brand’s legacy with his signature iconography style and striking color palette.

Hennessy brought in 2022 with a bang.

In February 2022, Hennessy partnered with the Asian music collective 88rising and Shanghai-based painter Zhang Enli to celebrate the Lunar New Year. The global live-stream event included performances by Jackson Wang and the unveiling of a new, limited edition bottle of Hennessy X.O. The vibrantly designed bottle, aptly named Poetry and Wine Welcome the Tiger, celebrates the powerful optimism of the Chinese year of the tiger. 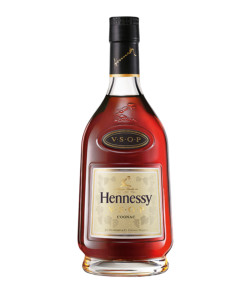 Hennessy V.S.O.P:
From one of the world's best-known Cognac brands, this expression serves the archetypal profile of V.S.O.P. Intense toasted oak notes ...